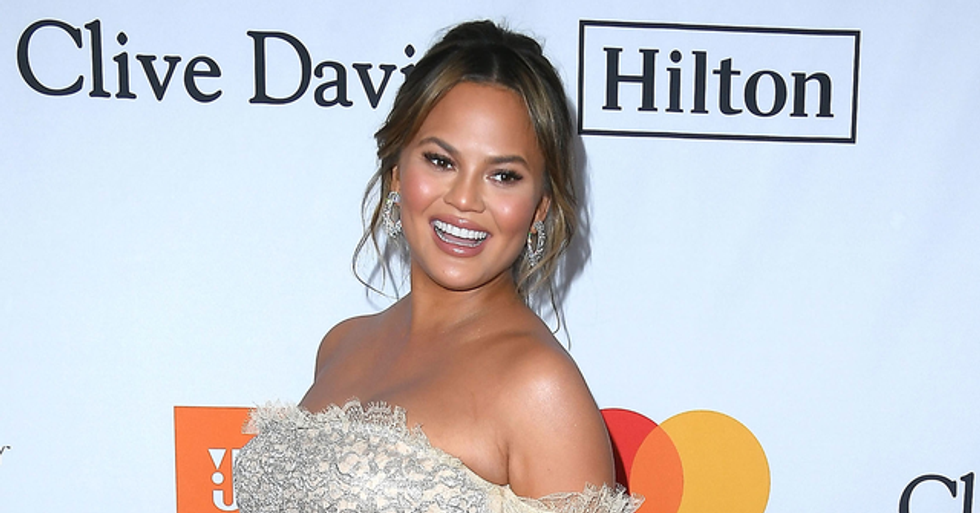 Chrissy Teigen is undeniably the sweetheart of the internet. Her Twitter presence makes her beloved by fans all around the world. And even better? Her social media proficiency means fans can always feel connected to the star. Teigen is also known for being absolutely stunning - as her latest Instagram story proves.

Chrissy Teigen is one of the world's most beautiful women.

And she's not afraid to show it off - as her latest Instagram proves.

Chrissy first met her husband on the set of his 2007 music video for “Stereo," where she starred as the singer's love interest. The model, author, and TV personality later revealed that when the shoot was over, the pair went back to John's hotel room, ate an In-N-Out, and hooked up. "We did the music video, we were together for like 12 hours," she told Wendy Williams in 2014. "We spent the entire day together, me in my underwear and him in a full suit, and I went to go say goodbye to him, to his hotel and we didn’t even say goodbye that night."

But it wasn't long before Chrissy joined her beau on tour.

Although the pair had a mini-break up during this time... that lasted a day.

"He was feeling really bummed and stressed out [on tour]. He was like, ‘I can’t be in a relationship right now.’ That lasted for one day. Literally, a day. I knew it came from a place other than us not working."

And it's Chrissy's ongoing social media presence which has cemented her as an internet favorite.

She has proven she really is the best celebrity on Twitter.

But Chrissy has been trolled online before...

And one of the things they've targetted is her body - with some saying she looks "square-shaped."

She addressed the "square-shaped" insult...

The star speaks openly about her body and plastic surgery...

Including the fact that she had breast implants put in when she was twenty.

Teigen was working as a swimwear model at the time.

And revealed that she had the surgery more to lift her boobs as opposed to making them drastically bigger.

A couple of weeks back, however, the star revealed she was going under the knife again.

Chrissy addressed the rumors after fans began speculating why she was having a test for the virus.

Teigen went on to reveal that she was getting her breast implants taken out.

"A lot of people are understandably curious (and nosey!) so I’ll just say it here: I’m getting my boobs out!"

She said that while she's enjoyed having them in for years, the time has come where she's just "over it."

"They’ve been great to me for many years but I’m just over it. I’d like to be able to zip a dress in my size, lay on my belly with pure comfort! No biggie! So don’t worry about me! All good. I’ll still have boobs, they’ll just be pure fat. Which is all a t*t is in the first place. A dumb, miraculous bag of fat."

She went into more detail about the decision during an interview with Glamour Magazine.

"I want them out now," she told the magazine. "If I could do one thing, it would be to have a lift. I think you’re supposed to replace [implants] every ten years. But when you have kids you think about [the risks] of surgery and I think, 'This is not the way I want to die, in boob surgery.'"

Earlier this month, the star has revealed that she has had the surgery to remove the implants.

And it's gone well!

She gave fans a long-awaited update.

"Surgery went perfectly! So so so so so sore, but waking up to this made it go away for half a minute at least."

She then revealed that she woke up to a note from her daughter Luna.

"Have fun pulling your boobies out."

Would you expect anything less from the daughter of the social media queen herself?

And of course, she couldn't help but crack a joke in the process.

Teigen took to her Instagram stories to reveal her new boobs...

She gave fans a first look at her new breasts after her surgery.

The bearded dragon was resting on her "healing boobies."

Check out the long-awaited snap below:

But it seems everyone has been saying the same thing about her new boobs...

Not everyone truly believes that she had her implants removed.

It's easy to understand the confusion, as to the naked eye, they don't look that different.

Teigen addressed the rumors directly on her Instagram stories.

She finally put the speculation to bed.

"Some people actually believe that I didn't even take them out, honestly," she said while laughing

"I swear I took them out. I can show you the scar," she continued while adjusting her cleavage.

She also uploaded this video showing off her new boobs:

And now Teigen is back on social media.

And looking better than ever!

She posted this story in a stunning dress.

Honestly, she could make anything look good.

But this dress is particularly revealing.

We love a confident queen!

Want more from Chrissy? Scroll on for a hilarious viral Twitter thread...