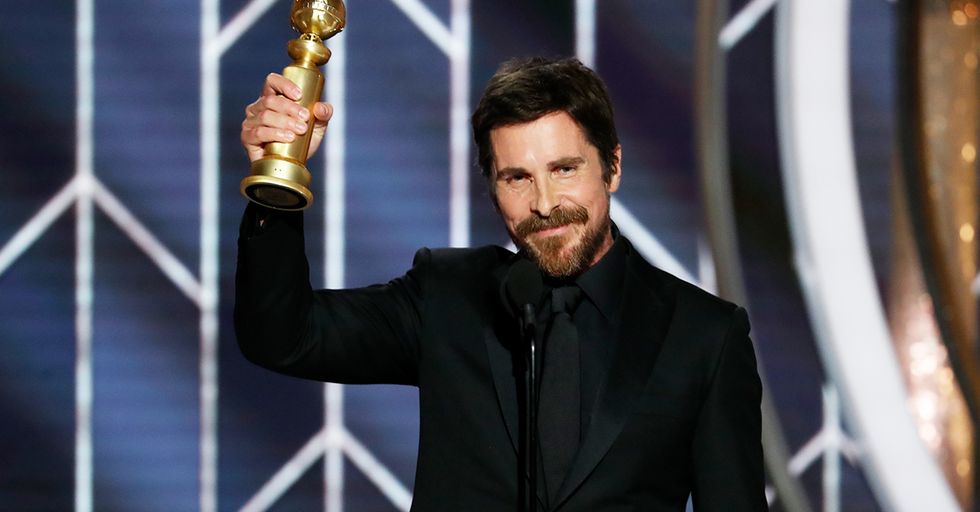 The 76th annual Golden Globes were a night to remember. Sandra Oh made history as the first person of Asian descent to host an awards show, as well as with her second Globe win for this year’s Best Actress in a Drama Series. Olivia Colman called Rachel Weisz and Emma Stone her “bitches" in a winning speech that made us all wish we were in their group chat. A girl serving Fiji water also served some serious face that earned her instant Internet fame. Jeff Bridges made a speech that no one understood.

But Bridges’ speech wasn’t the only one that confused Golden Globes audiences. When Christian Bale accepted his award for Best Actor in a Motion Picture Musical or Comedy, a resounding gasp was heard across the internet as people realized something truly unbelievable. The actor does not have an American accent.

For anyone who isn’t familiar with Christian Bale...

Bale is an A-list actor famous for his intense method acting and the physical transformations he takes on for his roles. The dude is dedicated to his craft.

The actor is well known for his performance in American Psycho, where he plays a rich yuppie who spends his nights committing murders across New York City.

Or maybe you know him from The Fighter.

Bale plays a former boxer who’s seen better days, and is failing to train his up-and-coming younger brother in the sport.

You must have seen The Machinist.

His character Trevor suffers insomnia and brutal emaciation, and Bale famously lost a stunning amount of weight for the role.

In all his most memorable movies, Christian Bale’s characters speak with American accents. I mean, what’s more American than Batman?

So people were pretty shocked when they heard his *actual* voice.

As soon as the actor began his speech, Twitter was inundated with perplexed sentiments from a nation discovering his American accent wasn’t the real deal.

Best actor? More like best accent, am I right?

Bale took home the trophy for best actor in a motion picture comedy or musical after his performance as former Vice President Dick Cheney in the movie Vice.

People legitimately could not tell what was going on.

As the actor jokingly thanked Satan for inspiration in bringing former VP Cheney to life on the big screen, the internet argued about whether his accent was British, Welsh, or just some weird prank.

His use of British slang pretty much confirmed the accent was legitimate.

He called his fellow actors “lucky buggers" for having the opportunity to work in Hollywood, and the cockney cadence was too spot on to be for show.

The accent wasn’t the only thing in Bale’s speech that raised eyebrows.

We also found out he calls his kids “Banana" and “Burrito," apparently.

It was all a lot to take in. Some people refused to believe the accent had always been there.

A few people thought the heavy accent had to be a bit.

And not everyone was a fan of this new discovery!

Others knew Bale was a Brit but remembered his voice being a little more subtle.

They say accents become stronger after a couple of drinks, but in Bale’s case, this theory remains unconfirmed.

Even after the initial shock wore off, people still thought the accent was a little over the top.

He was basically one “‘Ello guvnah" away from going full Mary Poppins.

I mean obviously there are beloved British actors — but stars like Bale are something different.

I don’t think I’ve ever even heard Michael Caine do an American accent. Hold on — Caine plays the Alfred to Bale’s Batman. Accent inception?

As it turns out, there’s a good reason people were so confused.

Bale’s doesn’t just pull out the fake accent for his movies.

The actor has actually done entire interviews in an American accent.

During the 2008 Batman Begins press tour, Bale only spoke in his fake American accent out of concern that his British heritage might hurt ticket sales for such an iconic American movie.

But his penchant for accents is no secret.

Bale has often discussed the voice work he does in his performances.

In a Reddit AMA (Ask Me Anything) thread, Bale addressed a question regarding how his different accent choices inform his performance.

The question was, “...what would you say A) is the hardest part about portraying a convincing American accent and B) is the most common mistake you hear American actors make when doing British accents?"

But many fans knew Bale was a Brit well before the Golden Globes.

Apparently I’m the only person on the internet who already knew Christian Bale is British and saw EMPIRE OF THE SUN in theatres.
— Howard Sherman (@Howard Sherman)1546829649.0

He’s used his own accent in films like Empire of the Sun and The Prestige.

I mean, it’s easy to forget when he literally transforms himself in every role.

The actor leads a surprisingly private life for such a high profile celebrity, so opportunities to hear his native accent are relatively limited.

Others were still stuck arguing what kind of accent it really was.

Bale was born in Wales, but both his parents are English and he was raised in London, and people had a lot of opinions about all of it.

Christian Bale wasn’t even the only actor who’s accent shocked at the Globes.

Everyone is tripping over Christian Bales accent when I always forget that Idris Elba has an accent !!
— Ariel Flores🖤 (@Ariel Flores🖤)1546886121.0

English actor Idris Elba was another surprise Brit for many fans.

Like Bale, Elba boasts an impeccable American accent in many of his performances.

The actor has been rumored as the next James Bond, which might help remind audiences he’s a Brit.

The actress has starred in many iconic American coming of age stories, and finding out she’s speaking in a fake accent honestly makes her performance all the more impressive.

The surprise non-American actor phenomenon happens more often than you might even realize.

Actress Katherine Langford portrays an American high-schooler in 13 Reasons Why, but actually speaks with an Australian accent IRL.

Would you believe Isla Fisher doesn’t really have an American accent?

The teen drama hero dons a fake American accent at work, but really speaks with a New Zealand accent.

Some viewers were so taken with their fav actors real voices, they suggested a new Globe’s category.

Who doesn’t love a British accent?

Who knew the Golden Globes could be so educational?

And all this time we thought awards shows were an excuse to get dressed up.