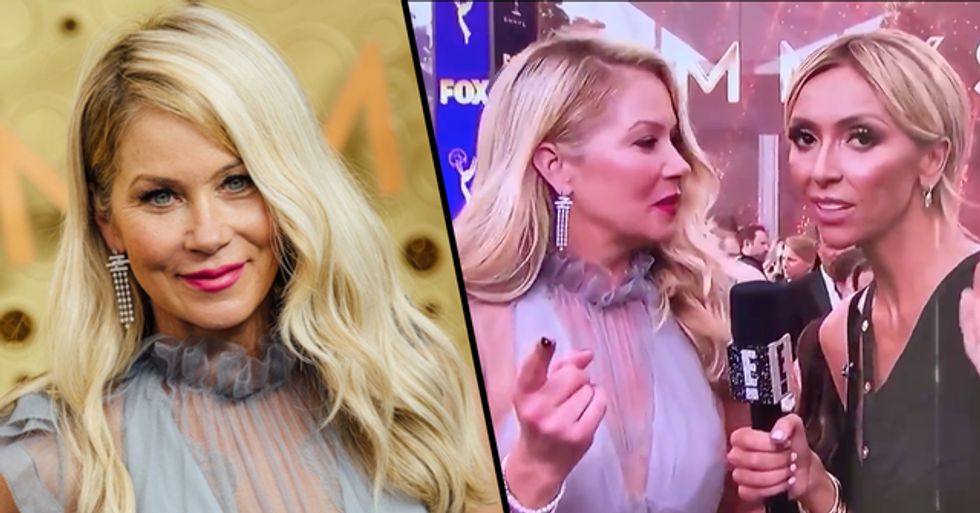 This year's Emmys were full of surprises - from Billy Porter being the first openly gay black male winner to Jason Bateman absolutely straight-manning his own surprise victory. But one that the internet has only just picked up on is Christina Applegate's red-carpet antics - and many believe that she, too, deserves an award.

When asked some pretty basic questions by what many are calling incompetent red carpet interviewers, Applegate came back with some pretty savage responses, and social media is going wild. Want to see what went down? Read on.

This Sunday gave us the annual Emmy Awards.

The ceremony is designed to celebrate excellence in the making of television over the past year - and 2019 gave the judges some pretty rich pickings.

This year was dominated by Brits.

Phoebe Waller-Bridge won not one, but three awards for her iconic Fleabag, while Jodie Comer had a shock win for Best Actress in Killing Eve.

That wasn't the only surprise of the evening.

Billy Porter also made history, becoming the first Lead Actor winner who is both black and openly gay.

And who could forget this iconic moment?

Jason Bateman beat out Game of Thrones to win Best Director for Ozark - and he was a surprised and disbelieving as anyone!

But, aside from the wins...

This year's Emmys also gave us another true icon, in the form of Chistina Applegate.

Applegate is a well-known American actress.

She may be best recognized for her role in Anchorman, where she played romantic lead and rival, Veronica Corningstone.

Although '90s kids may have another idea.

But Applegate is also known for something else.

She's one of the very best interviewees out there - not least because she seems to not have a filter, like, at all.

Applegate was nominated this year for her role in Dead to Me.

The Netflix original had an extremely positive reception when it was released this year and season two is reportedly already filming.

But that's not why she hit headlines.

Many complained that the red-carpet interviewers this year seemed particularly wooden and unprepared - and it was Applegate, of all people, who chose to call them out.

Jenny McCarthy. The Fox host got off to a bad start when chatting to Applegate on the red carpet.

For reference, McCarthy is one year younger than Applegate.

Trying to act like she watched her on television when she was a little girl is, at best, a not-so-subtle attempt at throwing shade, and, at worse, an example of how under-researched McCarthy was.

But it got worse.

McCarthy then asked Applegate how it felt to be nominated for Lead Actress for the first time. The problem is, it wasn't - she's been nominated multiple times for Samantha Who? - and wasn't afraid to remind McCarthy.

She quickly moved on to her next victim, E! News interviewer, Giuliana Rancic.

When asked if she wanted to say hello to her daughter, Applegate calmly stated that she doesn't watch E! Ouch.

And here's a video of the McCarthy incident.

People of the internet have gone wild for Applegate's straight-to-the-point method of trolling.

People drew attention to this moment in particular.

The look on her face when Jenny calls her sweetheart https://t.co/RhySvghPUp
— sara evermore (@sara evermore)1569193697.0

Have you ever seen anything quite so uncomfortable?

It looks like Applegate would rather be anywhere else but here.

Everyone is loving Applegate.

The way that the interviewers seemed so insincere and underprepared for one of the biggest television events of the year means they really deserve what's coming to them.

Perhaps next year, Applegate will be nominated for best comedy performance for this very moment.

And another reason that McCarthy clearly deserves it?

Is Jenny McCarthy drunk? She just told Christina Applegate that she grew up watching her on TV and remembered think… https://t.co/nQ2KlTdnrY
— Liz (@Liz)1569193805.0

Her insistent claim to be so much younger than Applegate isn't just rude - it's easily contested and only serves to make McCarthy look stupid.

But some pointed this out.

McCarthy doesn't have a great reputation in terms of making smart decisions, after all...

And some responded with this perfect roast.

Maybe this is why Applegate is nominated for an Emmy while McCarthy is interviewing her, hey?

And McCarthy isn't the only problem.

Racuc's interview style was also under fire - and likely it's Applegate's interview that cemented peoples' opinions.

Although it wasn't totally Applegate's night.

Yet again, she lost the Emmy - meaning she's still without one under her belt.

She's essentially the Leonardo di Caprio of the Emmys.

One day Christina Applegate will get what she deserves and you will all be so embarrassed it took you this long. #Emmys
— Rae Sanni (@Rae Sanni)1569199667.0

But we're sure that her year will come. She deserves it!

Although some have realized a new phobia.

My new biggest fear in life is being humiliated on national television by Christina Applegate https://t.co/eZP6bXhyTt
— JBELL (@JBELL)1569252274.0

We never knew it before, but being roasted by Christina Applegate is now up there along with our other biggest (and most irrational) fears.

But there's a reason Applegate is quite so great.

Sure, she's pretty brutal - but only to those who absolutely deserve it.

Which has led to a new phenomenon.

People out there are realizing that they've been Christina Applegate stans all along.

Christina Applegate, we salute you.

And if you haven't yet watched her amazing Netflix show, keep scrolling to learn everything you need to know.