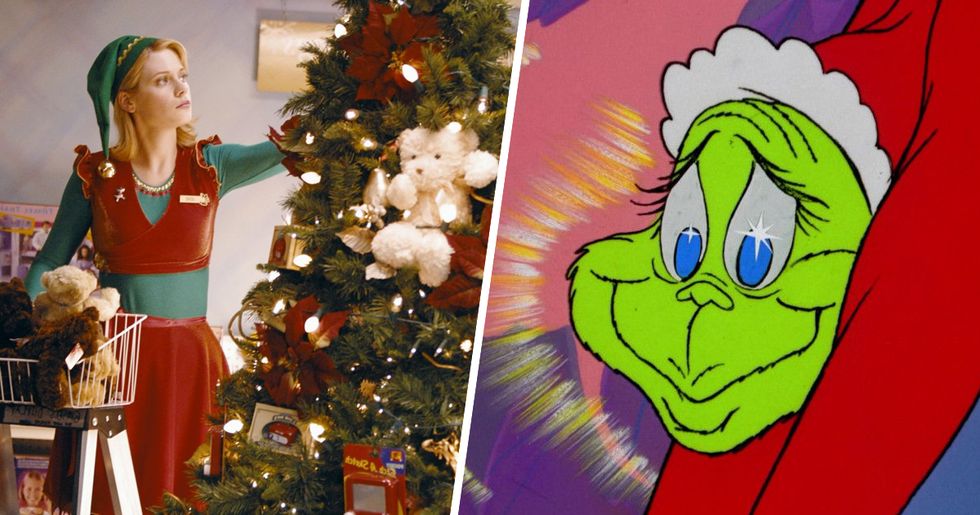 We all know at least one Grinch that constantly complains about stores and neighbors putting out Christmas decorations too early. "Bah humbug! It's not even Thanksgiving yet!" they might say. But we're about to arm you with the perfect comeback.

Experts now say that putting up holiday decorations early can make you happier. And where's the harm in that?

Those of us who celebrate Christmas know—or maybe remember—a certain feeling.

There’s a unique sense of joy and peace between people on Christmas, a sensation that honestly has little to do with presents or intensive shopping.

The season comes with a healthy dose of childlike wonder.

Something about all those lights and colors gets us feeling giddy! And now we know that it’s not all in our heads. There’s a reason we associate Christmas with these feelings.

Are you one of those people who craves it as soon as the leaves turn?

Some people might say you’re jumping the gun on Christmas, but now you’ve got a counterpoint: decorating early really is good for your happiness!

Or maybe you’re more of a skeptic:

It may be that you find yourself rolling your eyes at others, as they throw up lights and kitschy snowflake streamers on November 1st.

But don’t be so quick to judge!

It might seem early, but the propensity for early decoration tells us some nice things about people!

So, Christmas-lovers, don’t be shy. String up your lights with glee!

Despite knowing that you might be a little early, stringing your lights and setting up decor is a win-win situation: your house gets pretty, and you get happy.

Although there could be a number of symptomatic reasons why someone would want to obsessively put up decorations early, most commonly for nostalgic reasons either to relive the magic or to compensate for past neglect.

Basically, life can get complicated—but decorations remind us of simpler things!

But that's not the only perk of putting your decorations up early.

It can also help you make friends! We promise we didn't make this up.

How is this accomplished?

From an article in the Journal of Environmental Psychology called "Inferences About Homeowners' Sociability: Impact of Christmas Decorations and Other Cues":

A main effect for the decorated factor indicated that raters used Christmas decorations as a cue that the residents were friendly and cohesive. Decoration interacted with sociability in a complex but interpretable way.

When you light up your home, neighbors interpret that festivity as being friendly and sociable!

Decorating tells your fellow neighbors that you’re attached to the space.

And when people see a home that looks "lived in," they feel more comfortable approaching its residents. So, if you’re in a position to integrate yourself with your neighborhood, make sure you decorate!

People in the study couldn’t tell which neighbors were traditionally sociable and which ones weren’t when everyone had decorations up.

Everyone looks approachable when they’re decked out for the holidays! And there’s even more early decorating will do for you.

Holidays give people a rush of nostalgia. And that's a good thing.

The passage of time is inevitable, and as almost anyone can attest, the years can seem to fly by. The easiest way to stop time is to slow down and celebrate the little moment with the ones you love.

It’s a good excuse to smell the roses (or gingerbread).

When you take that time to stop and appreciate the moment, you create memories. Eventually, those memories become bits of nostalgia that add color to life's great tapestry.

Holiday decorations are also a connection to the past.

Nostalgia helps link people to their personal past and it helps people understand their identity. For many, putting up Christmas decorations early is a way for them to reconnect with their childhoods.

Remember when you believed in Santa?

Morin goes on to say:

It may be a bittersweet feeling. Perhaps the holidays serve as a reminder of when a loved one was still alive. Or maybe looking at a Christmas tree reminds someone of what life was like when they still believed in Santa.

It can help people keep memories of lost loved ones.

Morin also maintains that holiday memories are good ways to celebrate loved ones:

For people who have lost a loved one, the holidays may serve as a reminder of happy times they had with that person in the past. Decorating early may help them feel more connected with that individual.

Of course, we have to be careful not to confuse nostalgia with escapism.

After all, the holidays are a time to connect, not escape—even if that escape is a memory. Bring that old happiness into the present, as best you can!

It’s almost November, so if you’re already bracing yourself, think of this:

Sure, depending on where you live, you might be about to see a bunch of seemingly premature decoration spring up overnight. But there’s another way to look at this besides "annoying."

Instead of judging the early birds of Christmas, you can draw some different conclusions.

It may be that they are more nostalgic people—friendly, warm, and seeking a connection to the happiness of holidays past.

Maybe we should all start embracing our respective holidays like that!

Assuming they already bring joy, of course. If you’re someone who enjoys the holidays, get yourself into the spirit early!

You may end up thanking yourself later.

As expert psychologists have maintained, the trend of early decoration is a path to more happiness. So what do we have to lose?

Get your money’s worth out of them! Every week they aren’t sitting in the garage or basement is another week they’re visibly bringing you joy, instead. And isn’t that why you bought them in the first place?

It’ll remind you what you’re looking forward to.

Those of us who love the holidays spend all of fall and winter looking forward to them anyway, don’t we? May as well express that anticipation with cute, cheery decorations!

It’s not like stores will get in your way, either.

We all know the feeling: you walk into a department store in the first week of November and see a line of ornaments and Santa hats. It’s easy to get exasperated at that, but we could always make use of it instead.

There are worse things than a celebration.

Plus, it’s a lot easier (and more productive) to contribute to festivities rather than find ways to poke holes in them.

Lean into the merry!

Make sweet treats for your family or friend, decorate a gingerbread house, and send out cards. It’s so easy to make other people happy in addition to yourself, so why not try?

There’s a reason we cherish the notion of a "holiday spirit."

And in times like these, we need that sense of community, togetherness, and the spreading of joy more than ever.

Being a human being living in today's world is hard enough.

So what's the harm in a little frivolous revelry?! We say if Christmas decorations make you happy, put them up whenever you want! Spread a little cheer and make the world a sparkly, merry place. Happy Holidays! Share this with your most holiday-obsessed friends!