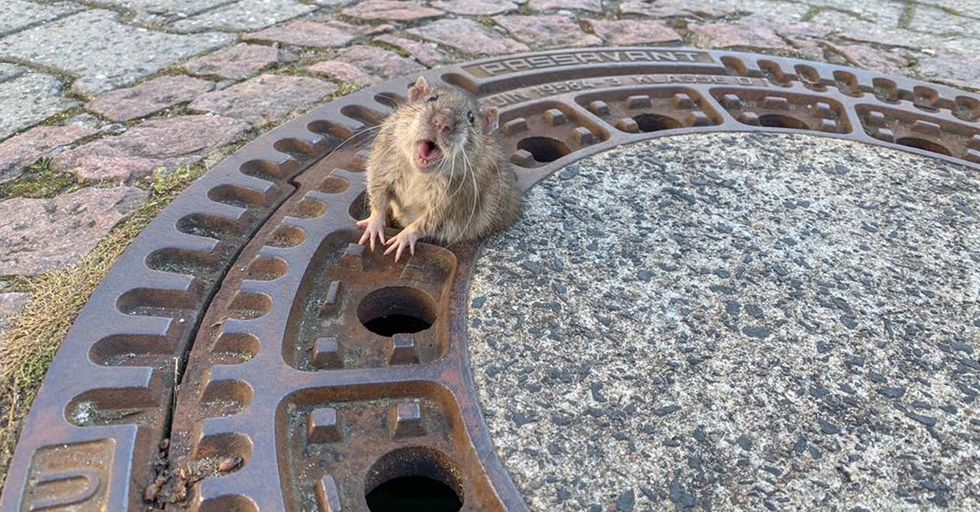 This Chubby Rat Got Herself Trapped in a Sewer Grate, Forcing Firemen to Come to the Rescue

A very um... plump rat got caught in a sewer drain in Germany today and the photos are just hilarious. We're not kidding. The photos are this weird combination of relatable and sad but also very funny. Like that time I was so drunk, I got my hand caught in a peanut butter jar and decided to just go to bed and deal with it in the morning. It gave future me a real treat to look forward to that night.

Anyway, back to the rat! The rat was first discovered by an adorable girl who called a local animal rescue, which is just maybe the cutest thing I've ever heard. See for yourself how gosh darn sweet both this funny little rat and the girls who saved it are. Maybe one day the world will live in harmony so that all rats can be treated with the kind of respect they deserve.

And you've heard of selfie rat...

And its name is... well, it doesn't really have a name yet.

None of those roll off the tongue.

Let me tell you the details and maybe you can come up with a name yourself.

This cute little rat was just found trapped trying to crawl out of a manhole cover in Germany.

But their little bum got stuck trying to squeeze out.

And people are relating so hard. I mean, this just feels like my 2019 summed up in one sad photo.

But they couldn't do much with the heavy manhole cover trapping the rat in place.

So they called firefighters in as well.

Slowly but surely, they wedged this little guy out of his hole.

Look at his little feet!

This is just a rat's world, and we're all living in it. We really need to design more rat friendly manholes.

Finally, the rat was freed.

And of course, some hero attached a Go Pro to his head, because, 2019. So we caught all of it on video.

Warning: this video contains some sad rat squeaks just before the happy ending.

I was both hopeful and terrified that there would be a whole family of rats down there, just waiting.

The rat was first discovered by this young girl.

And she made a drawing for the rescuers!

It's the little rat surrounded by hearts and the word "danke" which means thank you in German.

And can we just quickly point out the irony of the girl wearing the Mickey Mouse shirt? It's too cute.

This seems... backward? I don't know, you tell me.

I felt that so much. My most vulnerable state is when I'm trying to squeeze out of a storm drain.

Some are using it for motivation.

Yeah, I'm taping this to the read-out on my scale so instead of showing me my weight, it just shows me a picture of me in my natural habitat.

Some people are just being straight up rude about the whole thing.

Jokes on you, this happened in Germany and we Americans are perfectly happy being fat. You know what they say about the extra cushion...

Let me tell you a tragic story about the little rat that could.

Honestly, this story might be sadder than the Princess Bride. come at me.

We smell a sequel in the works.

I think this joke will work on like 30% of our audience – and that group does not include me.

Tbh, I just call it "winter bulk" to prepare me for the "summer cut."

This was my life this morning.

And... kinda right now. Is it inappropriate to unbutton my jeans at work? I'm afraid to ask my boss.

Whether you're working out or squeezing into a pair of jeans, it's all pain all of the time.

If I was the only one trying to squeeze into jeans, it would be pretty upsetting. At least I don't need an entire fire department to do it. Although...

Remy has spent too long in the kitchen.

I thought ratatouille was supposed to be reasonably healthy. It's like all vegetables, right?

This photo is already winning awards.

Okay, not really, but maybe National Geographic will give it a magazine cover or something.

This is messed up.

People want to give it a name.

And since Gaga killed it at the Oscars.

And if you're asking yourself, "is this even news?"

Yes, yes it is news. Thank you very much.

Should they have left the potentially disease-carrying rat in the sewer? Or was it the right thing to do to let it run free?
20%