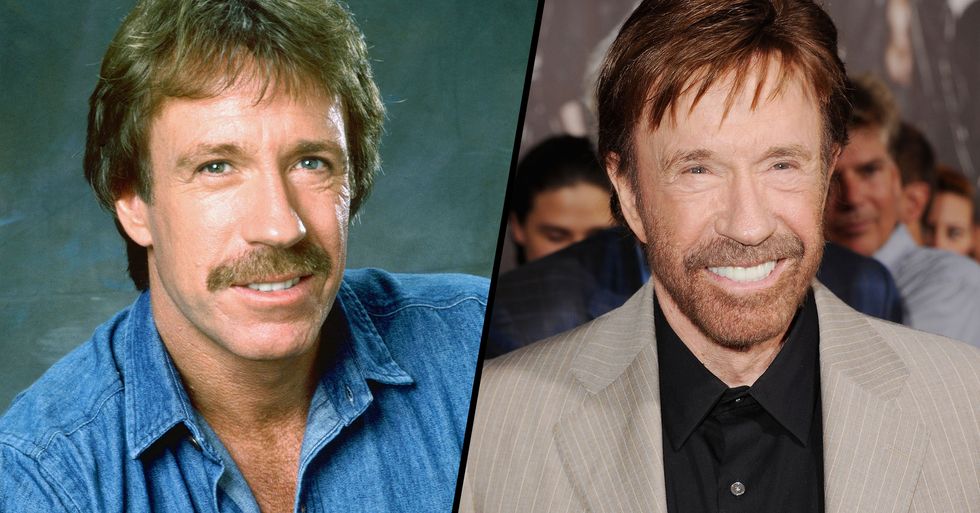 Martial arts legend, Chuck Norris, turned eighty this week, and people have been coming together to celebrate the legendary actor's birthday... By sharing their favorite Chuck Norris jokes and memes.

Keep scrolling to read more about his incredible life, and to see some of the best (and funniest) tributes...

Chuck Norris - the man, the myth, the legend - turned eighty yesterday, and he somehow doesn't look a day over forty.

Chuck Norris has lived the most extraordinary life.

There isn't much that Chuck hasn't done... So where do we even begin?

Born as Carlos Ray Norris on March 10th, 1940, Chuck was bullied throughout his childhood as a consequence of his Native American ancestry, which spurred him to pick up the sport of martial arts aged eighteen.

And was stationed at the Osan Air Base in South Korea, where he went on to learn Tang Soo Do, a form of karate.

He achieved black belt status in the sport...

Becoming the first in the Western Hemisphere to do so.

From 1964, Chuck went on to compete in various karate tournaments...

Where he reigned as champion until his official retirement in 1974. But along the way, he defeated karate greats such as Allen Steen, Joe Lewis, Arnold Urquidez, and Louis Delgado.

He even created a completely new style of martial art.

Chun Kuk Do is the martial arts style that chuck inspired and founded - It is based on Tang Soo Do, the original discipline that he learned, but also incorporates several other styles of fighting.

Upon his retirement in the martial art world, Chuck embarked on a colorful career in the movie industry.

The karate champion made his debut in the film The Wrecking Crew, but his popularity as an actor didn't truly soar until 1972 when he starred as Bruce Lee's enemy in The Way of the Dragon.

From there, he went on to become the Hollywood legend he is today.

Chuck starred in many epic action movies, including Breaker! Breaker!, Code of Silence, and the hugely successful television series, Missing in Action.

The actor suddenly retired from Hollywood, and it was for the most heartwarming reason.

He gave up on acting to take care of his sick wife.

Chuck had married the former model, Gena O'Kelly in 1998 and, when she became seriously ill with chronic pain and kidney issues, he decided to dedicate his life to caring for her. Speaking about his decision, he said: "I’ve given up my film career to concentrate on Gena, my whole life right now is about keeping her alive. I believe this issue is so important."

For the last couple of years, Chuck has loyally cared for Gena...

And has also delved more into the world of Christianity, having served on NCBCPS's board of directors promoting the use of the Bible in schools.

But despite his early retirement and sensible Christian antics...

Chuck Norris still remains one of the most iconic figures that both the worlds of martial arts and Hollywood have ever seen.

So, to commemorate Chuck's big day...

It was only fitting for people to take to Twitter to share their best (and arguably worst) Chuck Norris memes and jokes.

Some pretty fantastic candidates made the cut...

Even though you walked out of the womb, it’s still your birthday! Happy 80th birthday to the King of Memes, Chuck N… https://t.co/jOjVnZpxoS
— Justin Hollis (@Justin Hollis)1583854445.0

As people frantically delved into their old MySpace for their best Chuck content.

God, I love the internet sometimes.

Some truly vintage Chuck memes have been unearthed.

Here, we have an absolute classic...

So simple, yet so clever.

Though some can't get this out of their minds.

It haunts all of our dreams...

Here's to another eighty years!

For more on ripped old men, keep scrolling to read the remarkable story about a grandfather who gets mistaken for a thirty-year-old...