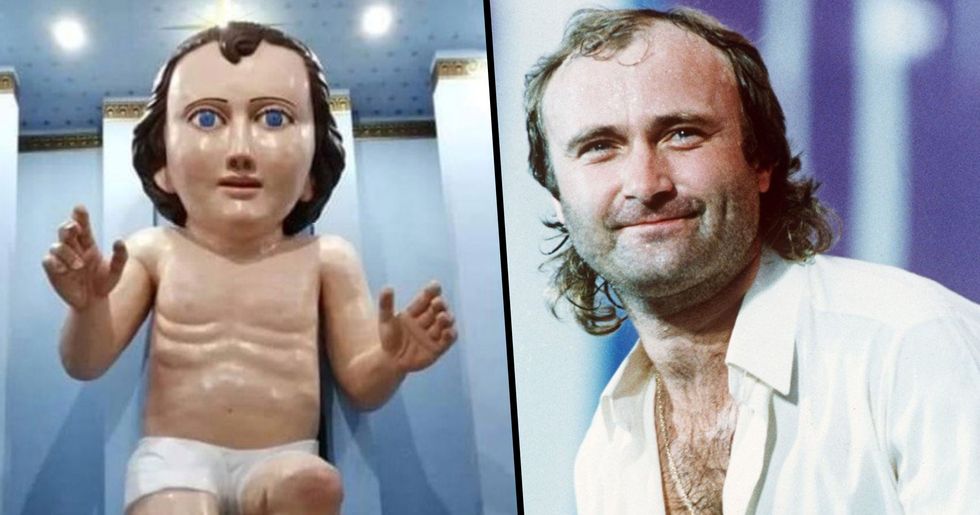 When you think of Jesus Christ, the distributor of loaves, the influencer of sandals and the son of God, how do you imagine him?

Growing up in the church I saw the image of Jesus all the time.

Upon the cross, looking skeletal and sad, standing tall in a white gown, arms outstretched, always bearded, not one for a clean shave...

It was years later that I was told, being Middle Eastern, Jesus was probably brown, but of course, my white neighborhood had always opted for pale Jesus paraphernalia.

But if like me you think the Jesus imitations you've been exposed to were a little unrealistic, wait until you see how one church in Mexico decided to depict Christ.

Situated in the Central Mexican state of Zacatecas lays the now-infamous church.

Going to church helps you feel closer to God.

Those that attend service at La EpifanÍa del Señor must be feeling especially close to Jesus since the new statue was installed.

Possibly the largest statue ever made depicting baby Jesus.

Standing at 22-foot, the statue weighs almost a tonne.

People across the world have been shook by the statue.

The man that made it, sculptor, Roman Salvador told the local press: "The image was made in the municipality of Chimalhuacan, it is an image of six and a half meters of fiberglass, resin, automotive paste, and automotive paint."

"I never intended to make it the biggest baby Jesus statue in the world."

The parish priest, Humberto Rodriguez explained to the local press how he had happened to order the design of such a huge statue. He said: "There is a space of between eight meters between the ceiling and the floor and I ordered a statue measuring six meters and a half but I never intended to make it the biggest baby Jesus statue in the world."

Many people have noticed an uncanny resemblance between the statue and British singer-songwriter, Phil Collins.

Whilst most news outlets think the statue bears a distinct resemblance to Phil Collins there are people who think differently...

The other comparison that has been made is that the baby Jesus statue looks a lot like the Hollywood actor, Nicolas Cage.

And the most votes go to "dunno he freaks me out."

I mean, it is pretty creepy...

But also seriously impressive, so I'm not sure I dislike it. And I mean the priest doesn't seem to be disappointed by it,  I wouldn't call it a total casualty.

The statue has put the church on the map.

I'm sure if Humberto Rodriguez was feeling like his congregation was a little slim, the baby Jesus is certainly going to help draw people in.

How did they even get it through the church doors?

Impressive as the giant statue is, as you can imagine it was no easy task transporting it to the church. According to reports it took twelve hours to get the statue from the nearby city of Chimalhuacan to it's resting place in La EpifanÍa del Señor.

If you couldn't tell from the other pictures, this short video shows just how big the baby Jesus statue actually is.

The memes have been rolling in...

I mean, of course, they have.

In the crossover, you never thought would happen... Nicolas Cage plays a Jesus baby that has been possessed by serial killer doll, Chucky.

He shoots, he scores.

No-ones going to get a goal in passed baby Jesus.

Wait, who's that then?

People were quick to notice a man standing next to the baby Jesus to demonstrate its size.

The joys of photoshop.

Someone, of course, did a classic switcheroo.

The meme game for baby Jesus statue is strong.

But it has literally been my job this morning to source these baby Jesus memes. What a funny world we live in. Continue scrolling to see a comprehensive list of the best 'Gonna tell my kids' memes in the peak of the trend. And if you have no idea what I'm talking about, trust me you soon will.