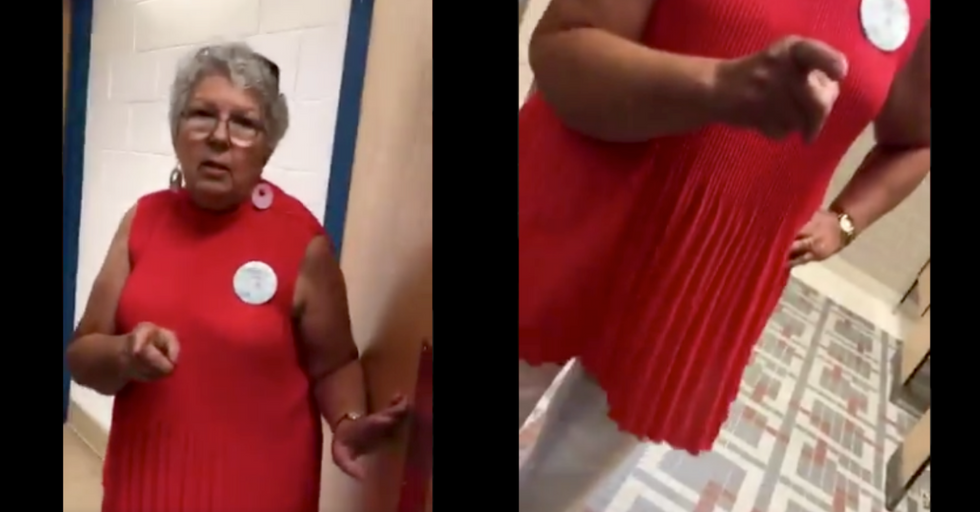 Church is supposed to be a place of welcoming — a place of community — where people of the same faith can come together and sing and praise and once a month eat donuts and drink orange juice in the lobby. One thing that's not supposed to happen at church, however, is body-shaming.

Apparently, that church-wide memo didn't quite make the rounds, as a video of a female church leader following a teenage girl into the bathroom and telling her she is supposedly too fat to wear shorts is going viral.

It's a shocking video, but it's also an incredible display of bravery from the girl who was attacked. It's one of those videos with a clear hero and villain, the kind that leaves you angry that some people can act so horribly but also a little bit inspired that some people can stand up to them? You've really got to see it...

Let's start with our story's hero.

Let's start with Jenna, an average girl who just graduated high school. And as her tweet above shows, she is both self-aware and authentic. Overall, she seems pretty chill.

She sings in her church's choir.

You have to admire the people who sing at church. They're willing to get up in front of their entire community and sing on a weekly basis — and they don't even get to sing songs they wrote themselves! That's why church singers are more impressive than, say, Fallout Boy.

And she takes her faith seriously.

Reading all her tweets, it's hard to come away thinking Jenna is anything but sincere about how much religion means to her. And that's why what happened to her is so appalling...

That brings us to the story's villain.

We're going to call her "Angry Lady," because in the video you're about to see, she is indeed angry. Also, I'm hesitant to call her by her real name because I don't want to add to the already heaping pile of hate the internet's been sending her way.

BURN. Angry Lady is the kind of person who has taken the word of God and twisted it to fit their own worldview. She has some very specific views on what is and is not appropriate in church, and she speaks about them as though she's been imbued with the authority of the Holy Spirit itself.

Here's what lead up to the events of the video:

Last week, Jenna was performing onstage with the church choir. At some point, she stepped offstage and went to the bathroom. Later, we'd find out in a tweet that she actually went inside to check for updates on a sick family member, putting her in an incredibly vulnerable emotional state.

The Angry Lady followed her inside.

That's right, Angry Lady decided the appropriate place for a conversation was the bathroom. You know, the most private room in literally any building? You're better off talking to your dad in his private study than you are talking to someone in the bathroom. (Did you guys also have a dad who stayed in his private study for 18 hours a day and warned you never to come in, not ever, no matter the circumstance? No? Just me?)

Here's the video of the confrontation.

This women followed me into the bathroom and attacked me calling me fat and that I couldn’t wear jean shorts becaus… https://t.co/qVFOzyhRbh
— Jenna 🦊 (@Jenna 🦊)1561923991.0

We don't know what happens before Jenna starts rolling, but we come in on Angry Lady chastising Jenna for, get this, wearing shorts onstage at church. Now, I'm no religious scholar, but can you imagine St. Peter reading a list of all your sins at the gates of Heaven, coming to "wore shorts at church," and doing literally anything besides shouting through the gates to the rest of his coworkers, "I don't have time for jokes, people! I want to get out of here by five for once!"

We hear Angry Lady compare Jenna to another girl, who she describes as "chubby."

What's important about this other girl? Well, according to Angry Lady, "she's got a dress on that's appropriate. It comes down to about the top of her knees." The logic, I guess, is that since other people are dressing differently, Jenna has to feel bad about her clothing choices? Is... is that it? Is that what she's getting at?

At this point, Jenna calls Angry Lady out.

In one of those questions that, just by nature of being asked means the conversation has gone south, Jenna asks Angry Lady if she's calling her fat. And if you weren't mad at Angry Lady yet, get ready for what she does in response...

She put her hands on her hips...

If you're not well-versed in the body language of the Privileged White Lady, the hands-on-hips move is used when the privileged white lady feels threatened in her natural habitat (a confrontational situation with someone who has less power than she does) and is preparing to lash out in response.

As though it were so obvious that Jenna was being ridiculous by not acknowledging it. This is the point in the video where I personally started clenching my fists and grinding my teeth so hard that people in the coffee shop I'm writing in came over to ask if I was all right.

Obviously the attack stung, because we hear Jenna start crying in the video. But she doesn't shrink — she gets right back in Angry Lady's face and defends herself, saying, "No, because I f*cking love who I am."

Angry Lady makes a play for the moral high ground.

Trying to re-frame Jenna as the one who had crossed the line, Angry Lady responds with a snippy, "Don't swear at me like that." It's especially infuriating because swearing in this situation is such a natural response. It's like if Angry Lady had run over Jenna's foot with her car and said, "Don't scream 'YEE-OWCH' like that."

And what a superficial grasp it is.

Swearing in and of itself is never wrong — it's the meaning behind the words that can be genuinely hurtful. Do we think God cares about a specific combination of syllables?

Angry Lady tells Jenna not to appear on stage in those shorts again.

And, for the record, these are the shorts in question. They are literally just your standard, everyday shorts. But it wouldn't matter if Jenna was wearing that dress J.Lo wore to the MTV Movie Awards that was just like a sheet with a single broach clipped around her waist — no one should be telling anyone else how to dress. It's literally never any of your business unless you are a fashion designer and it is Paris Fashion Week and you've hired a model to wear your new collection.

Then we get another clash of depth and superficiality.

"Who are you?!" Jenna asks Angry Lady, clearly in a "Just who the hell do you think you are"-sort of way. But Angry Lady's response is, "You can read my name" — an overly literal and intentionally obtuse reading of Jenna's demand. One thing Jenna does really well throughout this entire ordeal is cutting through the BS and saying what's really going on, while Angry Lady does her best to obscure the actual thing she's thinking, which is that Jenna makes her uncomfortable as a woman who both owns and loves her body.

Then, the bomb drops.

As Angry Lady heads for the bathroom exit, Jenna lays it out: "I've been recording this entire thing and I will show my parents and I will never come back to this church because of how much you are disrespectful. You are so disrespectful."

Next comes a weird beat: Angry Lady steps out of the bathroom to... talk to the church security guards?

During this last part of the video, I was dying for Jenna to tilt the camera up and reveal who these random men in the hall were. I saw shirts tucked into belts and I assumed security guards. In any event, these mystery men send Jenna back into the bathroom and continue talking to Angry Lady, who ends the video by reiterating how concerned she is with all of Jenna's gosh-darned swearing!

Throughout the entire video, Jenna never lets up.

It would be so easy in the moment to wilt in front of a woman berating you just so the situation could end, but Jenna doesn't stop standing up to Angry Lady for even a second.

That can be so difficult when those who are acting abusive are also powerful.

It's one thing for a random person say something rude to you, but it's a completely — and much scarier — situation when that rude person wields influence in a group to which you already belong.

What Jenna does throughout this video is extraordinarily brave.

She's just completely, totally herself throughout, and doesn't seem to give a damn about the consequences. I wish I could have been like that today when the coffee shop gave me a soy latte instead of the almond milk latte I ordered. I just slunk back to my table and drank the soy latte, even though I am allergic to soy.

Jenna informed the church's head pastor about what went down.

Jenna took the video to her church's pastor, Kevin Baker. And, real quick, doesn't "Pastor Kevin" sounds like the perfect "cool pastor" name? I bet he plays electric guitar with one of those little hip amplifiers sometimes after his sermon.

And not just for herself.

Because, as Jenna would later tweet out, Angry Lady represents the church at various church conferences. I have to assume she gives the same anti-shorts speech at every conference she goes to. "Um, ma'am? This is a conference on investing in Bitcoin--" "You still shouldn't be wearing shorts!"

It sounds like Jenna will be sticking around the church.

From meeting to the pastor to retweeting calls to watch the church's livestream, Jenna sounds like she won't be following through on her promise to never come back to the church. And that's great, because one cruel person shouldn't be able to take away something that matters to her.

In two posts on the church's official Facebook page, Pastor Kevin both took Jenna's side in the incident, calling what happened to her, saying, "great harm has been done in an incident that occurred this past Sunday where a faithful and very gifted young lady and worship leader was body shamed for her appearance." In another post, he mentioned that he had met with Angry Lady and that she "agreed to step down from any committee leadership roles she volunteered for within our church."

And so have other members of the church.

There are so many tweets just like this one, showing support for Jenna, calling Angry Lady's actions abhorrent, and even showing off their own shorts.

And so has Jenna.

It's so easy to be furious with Angry Lady, but Jenna made a video for Twitter asking us not to direct any abuse towards her. She's pushing not for vitriol, but for love and forgiveness.

Because it's clear Angry Lady was working out her own self-hatred on Jenna.

You see that projector up there? That's pretty much Angry Lady, because this is a clear example of what I call "The Gay Republican Problem." It's always the Republicans who are most vehemently anti-gay who get busted soliciting sex from men in airport bathrooms. We only hate what we see in ourselves.

Jenna is the church leader Angry Lady wishes she could be.

Every step of the way, Jenna has been both positive and authentic. Even in the heat of the moment, she never attacked Angry Lady — she spoke lovingly about herself and never let herself succumb to hatred. Again, I'm no religious scholar, but that sure feels more Christ-like to me than, you know, hating someone arbitrarily.