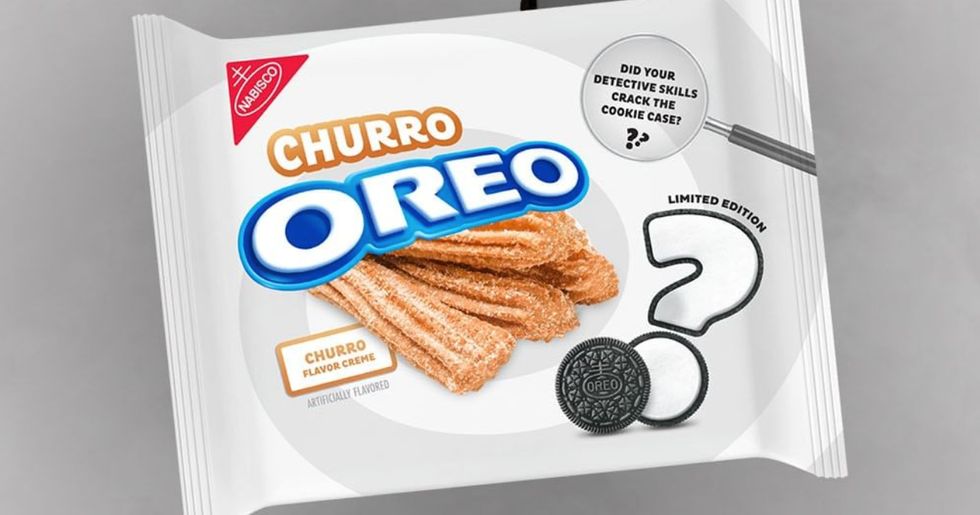 That's right Oreo and churro lovers, the unimaginable is now upon us...

Oreo has announced that the "mystery flavor" that they've had on the shelves since September is churro.

Here's what has been going on...

I mean, if you dislike sugar and soft doughy happiness and deep-fried crunch then maybe you won't like churros.

Well I mean not instant, instant... you do have to go somewhere and purchase them, but as soon as you take a bite, well... instant happiness.

The secret to the perfect churro...

is definitely in the fry. So I know what you're thinking... how do they manage to translate that distinct fried dough flavor into the cream of an oreo? Well, my friends...

Have faith in the almighty Oreo.

I mean these are the guys that worked out how to bring Reeses Peanut Butter Cups into the mix.

Seriously if you haven't tried these you should. Maple Creme Oreos really know what's going on.

The people at Oreo love a challenge.

Deciding on the mystery flavor was a tough decision.

I mean imagine being able to choose any flavor. It's no surprise Oreo went with the popular fried dessert,  and we think this is the best collaboration since Dido and Eminem.

All over the U.S people have been guessing the flavor.

The distinct flavor of a churro can be difficult to identify when it's missing it's giveaway fried dough texture.

Oreo offered a grand prize to anyone that could guess correctly.

As part of the promotion, Oreo offered consumers $50,000 if they could guess the flavor correctly.

"Is it snickerdoodle flavor?"

One Twitter user was pretty close, the cinnamon sugar coating of a snickerdoodle is pretty similar to that of a churro.

I think we can all agree, in a blind taste test it would be hard to distinguish a snickerdoodle from a churro... let alone if neither had their regular texture. Hard luck bud, guess you're gonna have to pay off your student loan after all.

People started getting impatient with Oreo.

All across America, people were bickering over whether they had guessed the mystery flavor correctly. Office workers were putting in stakes, schoolchildren were getting into fights and families were being torn apart...

People began to question whether Oreo even knew the flavor.

Impatient followers of the mystery flavor competition began wondering whether Oreo was just going to pick any of the popular answers at random, having no idea what they'd actually created.

A lot was riding on the announcement.

@TalkWithTatar Sorry to keep the office in suspense but we need you to bear with us just a little while longer whil… https://t.co/KXdXXhAdDN
— OREO Cookie (@OREO Cookie)1574873281.0

It seemed stakes were pretty high and many people were waiting in anticipation for the Oreos announcement.

Some people seriously wanted to win.

In fact, it seemed as though some people had banked on that 50k they were going to get off Oreo for guessing the flavor correctly.

Some people were adamant that they had been tricked. They were certain the flavor wasn't really churro...

The fans that had been confident that the oreo filling was Graham crackers flavor were not happy with the churro announcement.

I guess the flavor is probably whatever you believe it is, right? We don't need to argue... can't we just enjoy the Oreos?

Oreo is all about love and acceptance...

I mean remember when they brought out those "ask my pronoun" edition cookies? Doesn't get more woke than that, eh?

Oreos has jumped on the churro bandwaggon before...