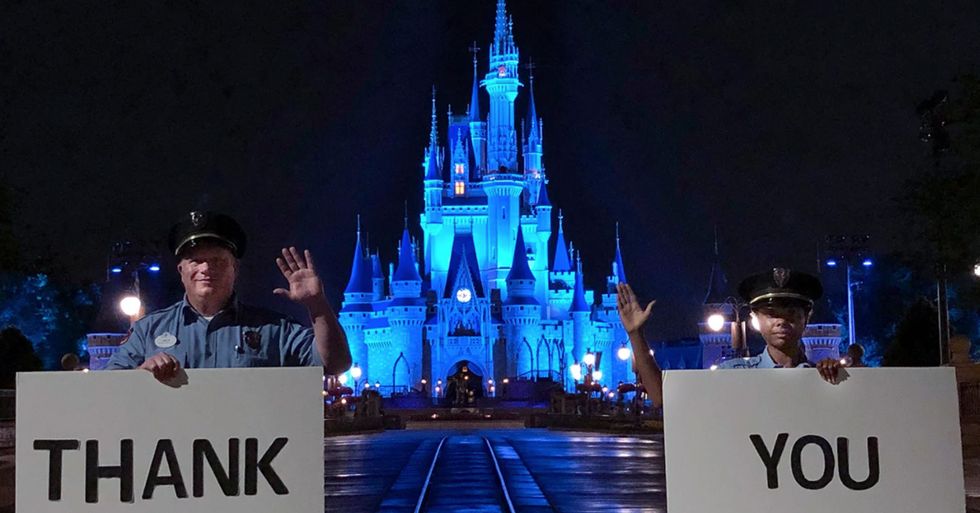 As we all know, Disney has had to close its doors, but that doesn't mean the magic has stopped.

Cinderella's castle might be the most iconic Disney structure ever... what they did to it yesterday will leave you speechless.

Keep scrolling for the emotional tribute...

Disney's iconic castle is set to display the most meaningful message.

Considering the current pandemic, this tribute is going to be an emotional one for sure.

But first, let's take a look at what makes this castle so important...

Cinderella's castle has served as the focal point of DisneyWorld, Florida, for nearly fifty years. Since it's completion in July 1971, it has become one of the main attractions of the park's Magic Kingdom.

In fact, it's impossible to go to Disney World without snapping a pic outside the iconic castle.

The 183-foot spectacle is a truly magical (and Instagrammable) sight. Keep scrolling to see the castle in all its glory...

Sadly, some of the plans for the castle remained unfinished at the time.

Walt Disney passed away 5 years before the park opened its doors, so, while there were plans in motion for a suite for the Disney family and executives to be added to the infamous castle, they were never seen through.

The park has developed massively over the years.

Both Disneyland and Disney World are now home to several acres of land that contain themed areas of the park, including Mickey’s Toon Town, Adventureland, Fantasyland, and many more.

But when it comes to Cinderella's castle...

There's one thing for certain... surely one of the most iconic aspects of the park deserves some much needed TLC too?

Of course, since the '70s, Cinderella's castle has undergone renovations.

One of the most notable changes came with the addition of the Disney Dream Suite back in 2006.

The suite had always been there inside the castle...

But it was made over to be livable for guests.

... A promotion which ultimately ran longer than the planned twelve months - concluding in December 31, 2008.

Now, it's been converted into the 21 Royal experience.

And a dining experience in the private suite comes at the upscale price of $15,000 per table!

Unfortunately due to the current global crisis, Disney have had to close its doors.

But that didn't stop them from sprinkling a little fairy dust to brighten everyone's spirits.

Disney parks around the world are honoring doctors and nurses for World Health Day.

Watch as cast members from @WaltDisneyWorld Resort share a heartfelt thank you to the members of the healthcare com… https://t.co/AgU1xthH4g
— Disney Parks (@Disney Parks)1586314986.0

It is celebrated annually on April 7, paying tribute to healthcare teams working tirelessly to keep us healthy.

It takes on an extra special meaning this year.

Despite being closed to visitors, all Disney's world-famous theme parks are “uniting across the globe with a message of thanks and appreciation to celebrate the brave healthcare providers who are helping so many," according to their blog post.

It all kicked off at Shanghai Disney Resort.

👍 ❤️ The tallest and biggest disney castle said THANK YOU in multiple languages to all the frontline medical worker… https://t.co/tc8IoL4FSB
— DONGDONG (@DONGDONG)1586227450.0

The Enchanted Storybook Castle lit up with the words "thank you," written in different languages across the building.

Walt Disney World was a sight to see.

It's World Health Day. @WaltDisneyWorld is honoring our medical professionals who are on the frontlines battling th… https://t.co/CTKinuENii
— T.A. Walker (@T.A. Walker)1586279233.0

It lit up the iconic Cinderella castle, glowing bright blue, as a beacon of hope and gratitude to all those risking their lives.

We are uniting around the globe in a message of thanks and appreciation to celebrate the health heroes who are help… https://t.co/9K9j7087RU
— Disneyland Resort (@Disneyland Resort)1586266162.0

Some held up signs and waved, while others at the Paradise Gardens Park at Disney’s California Adventure, wrote “thank you" in flower petals.

Shanghai Disneyland has announced something surprising...

They made a statement on their website that they will “partially resume operations on March 9," opening “a limited number of shopping, dining, and recreational experiences" across the park, including Disneytown (a shopping and dining area), Wishing Star Park (a public park owned by the resort) and Shanghai Disneyland Hotel. Just like Disney's other parks, the actual theme park itself is not yet reopening. Keep scrolling for more Disney news...