So, first, let's remind you what the castle looks like right now. | 22 Words 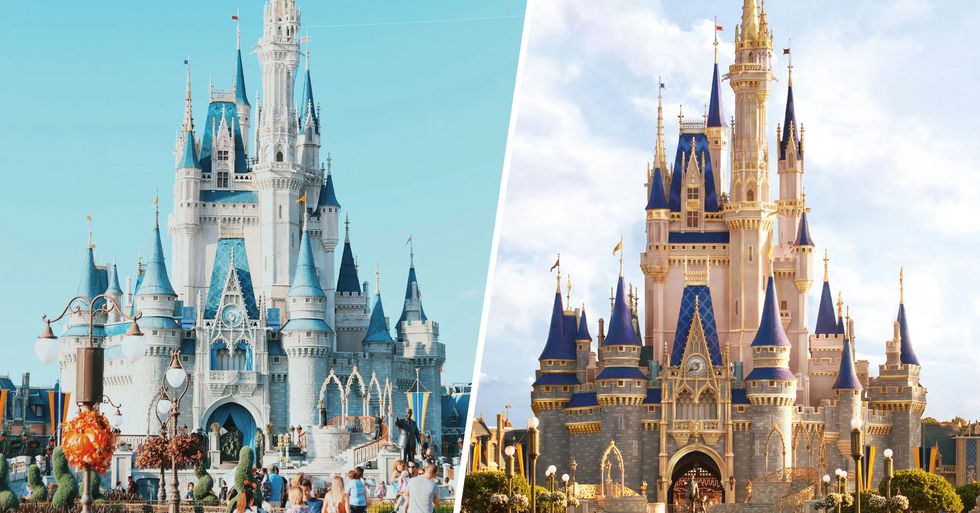 Cinderella's Castle at Disney World Is Getting a Stunning Makeover

The Walt Disney resorts have changed a lot over the years - but one thing that's always remained consistent is Cinderella's castle. The beloved spectacle is the real centerpiece of the resorts and attracts thousands of tourists, cameras in tow, all year round.

But now it looks like Disney World's iconic castle is getting a makeover.  Keep scrolling to see what the beloved castle will look like after the renovation.

It's set to be utterly magical...

Cinderella's castle has served as the focal point of DisneyWorld, Florida, for nearly fifty years.

Since it's completion in July 1971, it has become one of the main attractions of the park's Magic Kingdom.

In fact, it's impossible to go to Disney World without snapping a pic outside the iconic castle.

The 183-foot spectacle is a truly magical (and Instagrammable) sight.

The design for the castle was originally inspired by a combination of real and fictional palaces.

Including Château d'Ussé, Fontainebleau, Versailles and the châteaux of Chenonceau, the Alcázar of Segovia but primarily, and most visibly, the Neuschwanstein Castle in Bavaria.

Despite what it may look like, no actual bricks were used in its construction - instead, the inner structure consists of six hundred tons of steel-braced frame construction.

Sadly, some of the plans for the castle remained unfinished at the time.

Walt Disney passed away 5 years before the park opened its doors, so, while there were plans in motion for a suite for the Disney family and executives to be added to the infamous castle, they were never seen through.

The park has developed massively over the years.

Both Disneyland and Disney World are now home to several acres of land that contain themed areas of the park, including Mickey’s Toon Town, Adventureland, Fantasyland, and many more.

But when it comes to Cinderella's castle...

There's one thing for certain... surely one of the most iconic aspects of the park deserves some much needed TLC too?

Of course, since the '70s, Cinderella's castle has undergone renovations.

One of the most notable changes came with the addition of the Disney Dream Suite back in 2006.

The suite had always been there inside the castle...

But it was made over to be livable for guests.

... A promotion which ultimately ran longer than the planned twelve months - concluding in December 31, 2008.

However, there was some bad news.

The suite officially closed its doors in 2014.

Now, it's been converted into the 21 Royal experience.

And a dining experience in the private suite comes at the upscale price of $15,000 per table.

But what about the outside of the castle?

Well, there's been some exciting news...

The castle is set to receive a whole new makeover.

The announcement, revealed by Disney Park Blogs this week, comes in honor of the seventieth anniversary of Cinderella. Keep scrolling to see what the castle will look like post-makeover...

The updates have been described as "shimmering and royal."

Jason Kirk, vice president of Magic Kingdom Park, also said that the makeover will be "bold."

And it's set to begin in just a few short weeks...

With the updates continuing throughout summer.

Kirk has assured future parkgoers that their favorite attractions such as Mickey's Royal Friendship Faire and Happily Ever After will go on as usual.

The castle is set to glisten like never before.

Disney Parks recently dropped the artist's impression of what the finished castle will look like and it looks truly magical. Keep scrolling to take a look.

So, first, let's remind you what the castle looks like right now.

Currently, the colors are more pastel-toned and washed out.

Here's what the iconic castle will look like after the renovations:

The updates appear to include new blush-pink paint on the top half of the castle, a darker blue for the roof, and stunning gold finishing. The castle is fit for royalty. We can't wait to see it finished! This isn't the only exciting announcement Disney Parks have had to offer. Keep scrolling to get an exclusive look at the upcoming Frozen land.