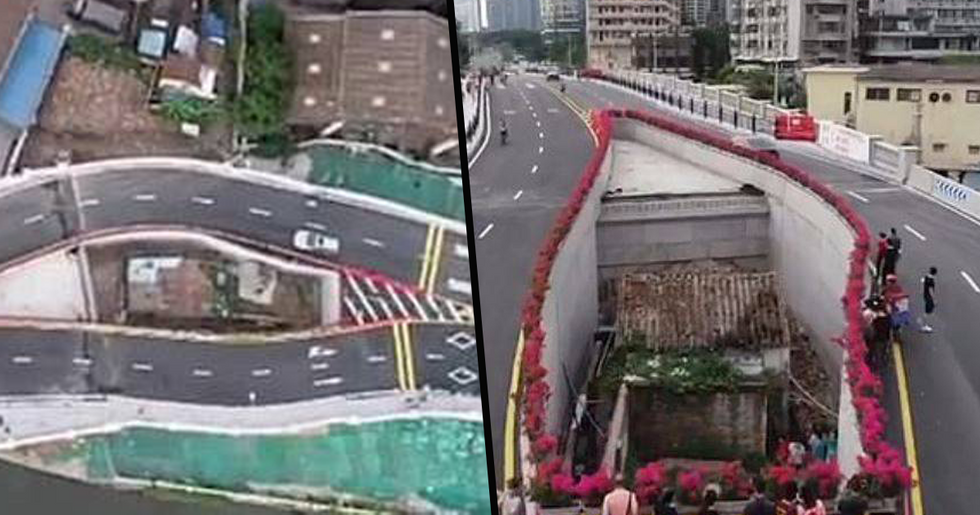 There are so many decisions that are clearly made without a proper plan. But one woman's decision to keep her tiny home in a less than desirable location might be the craziest (or most stupid) yet...

Ever look at a product and think "whoever made this clearly didn't think it through?"

There are a surprising amount of blunders made every day, resulting in some absolutely hilariously bad products, and almost unusable amenities.

Take this for example: Who put this hand sanitizer right above the light switch?

I guess that's one way to make sure everyone is staying clean and germ-free. It seems pretty inconvenient to me, though!

Whoever made these nutcrackers:

Thanks! Now I have a new creature for my nightmares.

Whoever installed this soap dispenser:

Oh, you wanted to use the soap dispenser? To dispense soap? Why didn't you say so?

Whoever thought this gate was sufficient:

Now you need to climb over the gate to get to that patch of grass. How inconvenient!

Whoever put this National Geographic in a plastic bag:

The cover story is literally about the damage that plastic does to the environment. Nice one, guys.

I'm sure Lauren is a perfectly lovely person. Scratch that– she's clearly evil.

Whoever decided to put Braille on this bumpy wall:

I imagine that anyone who reads Braille will find a lot of gibberish on this wall. I suppose the thought was there, though.

Whoever paired these photos with this headline:

I was so ready to write a strongly worded letter to the editor. Instead, I think this should be framed.

Whoever designed this glow-in-the-dark clock:

The numbers glow. The hands don't. Are you wondering what time it is? Well, keep wondering.

Whoever designed this hospital floor:

I'm not sure what look they were going for, but something tells me "Blood smeared all over the floors" was not it. Better luck next time.

Whoever made this terrifying night light:

Most people use night lights so their kids won't be afraid of the dark. I'm pretty sure this accomplishes the exact opposite.

Whoever made this shirt:

No, it doesn't, actually. This is such an easy one to double check! Someone really dropped the ball here.

If you're only going to include 25 balls for the ball pit, I recommend leaving them off the packaging completely. It's just way too depressing!

Whoever made this label:

Is there gluten or is it gluten-free? Is the gluten free?! Is that what you're trying to communicate?

Whoever added these cupholders:

You can put a cup there. Just make sure it's empty.

Whoever made this wine glass box:

Just so we're all clear: Kids should not drink wine. I didn't think I'd have to clarify that, but here we are.

Whoever set this table up:

Maybe they should have started with something like 200 pounds. Either way, that's a purchase I will not be making.

They had to have seen it, right? They MUST have. How could they have missed it?!

Whoever painted this bathroom:

Or maybe this is a brilliant idea. Now you can't tell when the wall is actually dirty.

The person who made this hair dryer:

I feel like whoever was responsible for this hair dryer's design had a fundamental misunderstanding of what the product actually does.

The person who made this poster:

All you needed was a drop shadow! This could have saved a lot of confusion.

Think about it for, like, a second. This is not going to go the way you think it's going to go.

The person who thought Oklahoma is a country:

Nope. It's still just a state. Unless you know something the rest of us do not.

The person responsible for this tire cover:

But what do you do when the flag is in the shape of the cross? I'm very confused. Should I be kneeling?

Whoever put this monstrosity in a store window:

I guess they don't have shirts. Just pants and hats.

Whoever made this basket:

The person who hung a mirror RIGHT HERE:

Uhhhh, I mean, I guess you can put a mirror wherever you want to. But this is a weird place for one.

The person who hung this paper towel dispenser:

If you want your paper towel to be dry, you're going to have to look elsewhere. Sorry, I don't make the rules.

The creator of this Einstein duck:

It had a nose and a bill. Just like Einstein.

The building known as "nail house."

One woman loved her tiny home so much, that she refused to move, despite the government trying to buy the house off of her for years. So, they decided to push forward and build the motorway bridge around her tiny house in Guangzhou.

I mean wings of a motorway bridge aren’t the first things I’d want to see in the morning.

And is now the only house situated in the “pit."

She said she wasn’t worried about what people would think of her for choosing to stay.

She explained: “You think this environment is poor, but I feel it’s quiet, liberating, pleasant and comfortable."

It’s reported that Ms Liang is the only person out of multiple firms and 47 households that refused to budge.

For more like this, keep scrolling to find out what one woman found after moving into this celebrity’s old house…