According to official documents, Liu had taken it upon himself to replace part of one shoe because it was too damaged. | 22 Words 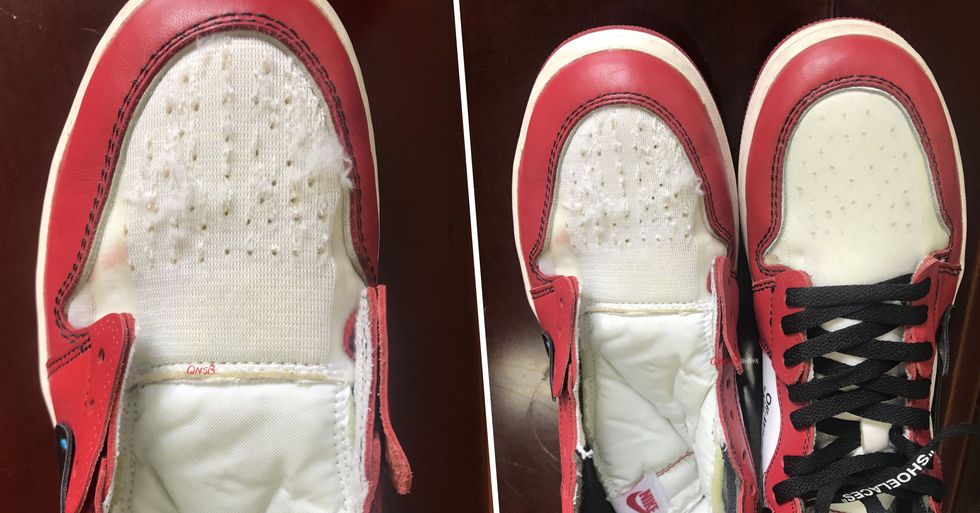 Nike is the largest sports brand in the world, worth over thirty-four-billion dollars, and it's not hard to see why. They literally have sneakers for every occasion, and people clearly can't get enough.

But when Nike's limited-edition range gets thrown into the mix, people are willing to spend thousands just for the privilege of owning them.

You'd assume that anyone willing to pay top dollar for these, would make sure they're investing in an equally efficient cleaning service for them, but that wasn't the case for one man in China, and the result will leave you squirming.

I mean, as mainstream as these trainers may be, they're actually very stylish and comfortable. If I were you, I'd definitely invest in a pair. Let's have a look at the most popular pair right now.

They're available in a range of different colors if pink isn't really your thing.

Of course, you've heard of these...

Of course, they could make some improvements to the system, but we'll always defend Nike and their designs. They're literally the whole package.

Whether it's casual street style, or for your sporting needs, many of us have purchased a pair.

Nike's limited edition range, however, is a completely different ball game, and one that many of us don't have the funds to invest in...

But that doesn't stop people from paying ridiculous amounts of money to own a pair.

For many out there, collecting every pair of weird and wonderful sneakers isn’t just a hobby – it’s a lifestyle.

Take these for example...

These are classed as the most expensive pair of shoes Nike has ever made. They cost more than a house! Crazy, right?

Sneakers can be an expensive vice.

The obsession with having the most well-rounded and rarity-filled collection can really take over someone’s life.

So you'd think that people spending this kind of money on sneakers would at least invest in keeping them looking their best.

Went into Nike town to get my Air Max's cleaned today (thanks @jason_markk) :D Saw soooo many buff trainers- all those years without them 😍
— LOZZAH'S THOUGHTS. (@LOZZAH'S THOUGHTS.)1427391087.0

Sadly the owner of a pair of limited edition Nike sneakers didn't think before jumping on the bargain of having his highly expensive shoes cleaned for $5.

And the results speak for themselves...

The shoe cleaner in question has been taken to court over the damages done to the sneakers and is being forced to pay over six hundred times his wage after accidentally defiling his customer's beloved trainers.

Mr. Liu appeared in court on April 22, after Mr. Wei accused him of ruining his limited-edition sneakers.

Wei sent his trainers to Liu’s shop to be cleaned, and when he came to collect them three days later, he says the state of the sneakers were "beyond recognition."

According to official documents, Liu had taken it upon himself to replace part of one shoe because it was too damaged.

Understandably Wei was upset, he demanded Liu pay the full cost of the shoes as compensation, even filing a civil suit against the cleaner after months of negotiating the reimbursement price. Take a look at the damage below...

Liu was willing to pay the retail price of the shoes, but couldn't understand why he would have to pay the extortionate price Wei paid for the shoes.

The court came to a conclusion, considering not only the retail cost of the shoe but also the inflated market price due to them being limited edition.

The court decided Wei’s losses amounted to $3000, which Liu could pay in installments.

China's social media site, Weibo has blown up since the case went public. Users just couldn't understand why anyone would pay that price for a pair of sneakers, and then get them cleaned for such a small amount. It really is baffling. Keep scrolling for the sneakers that are quite possibly Nike's craziest collab ever...