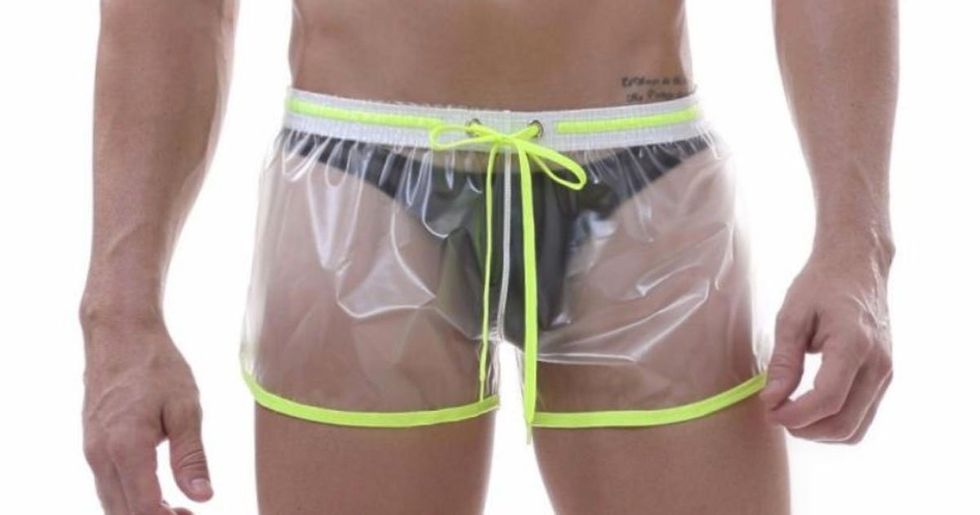 I've said it before and I'll say it again, this year's summer trends have well and truly been the most shocking fashion faux pas to have ever taken the world by storm. It seems as if big-name designers see one sun ray coming through the window and boom, we are suddenly introduced to an all-new fashion disaster.

And this is another one of those exact moments. A couple of months ago, we saw the birth of lace shorts and it seems as if we’ve evolved since then and now I’m going to introduce you to the abomination that is: clear plastic shorts.

I wouldn't read this if you've just eaten because we've got some interesting pictures of the new invention in all of its clear glory... Keep scrolling to catch an unwanted eyeful.

Over the years, fashion has become more than just clothing. It is now often used to make a statement, rather than its traditional use of providing modesty and warmth.

But it can sometimes get strange. ..

Fashion has certainly had its moments. With clothing brands having such a huge platform, they often go to the extremes just to make a statement.

But men's fashion has taken the real hit this year...

2019 has seen a growth in quirky trends in, not only women's fashion, but men's, too. Men have always had a more "traditional" selection when it comes to fashion, but this year has seen a real change in what is deemed as "trendy" for the boys.

RompHim makes a selection of stylish rompers for men. It was started by a group of dudes who were sick of the lack of "stylish, yet comfortable" clothes available for men on the high-street.

RompHim aims to break down barriers.

With a variety of outlandish styles, patterns, and colors, RompHim is challenging the typical fashion stereotypes that surround men. With rompers traditionally being a female garment, RompHim is fighting to make the item acceptable and, most importantly, stylish, for all genders.

And they're not the only company with this goal.

More and more fashion brands are beginning to cater for more stylish and "out there" fashion garments for men. Long gone are the days in which their choice was simply which shirts and pants to wear - Men's wardrobes are filling up rapidly with kooky items every day.

The part you've all been waiting for - the lace shorts have landed. LA-based company, Hologram City, launched its new collection of see-through, lace shorts - in a variety of different colours, obviously.

Hologram City have already made a name for themselves.

This brand is already popular for its selection of revealing "party-wear," and the label has been sported by the likes of Jordyn Woods, Miley Cyrus and Fergie.

And their lace shorts have taken them to a whole new level.

Here they are, gents - this summer's staple fashion item made entirely out of see-through, floral lace. Little will be left to the imagination.

They come in a variety of colors.

The shorts, which are priced at a cool $49 per item, are available to buy in different shades of pastel green, pink, blue and purple. Though the shorts were initially met with criticism, many people have been praising the company for providing more "feminine" colored clothes for their male audience.

And there are even matching shirts.

Because the shorts just aren't outrageous enough on their own. If you want to look as fresh as these guys, you can grab yourself a matching lace shirt. Perfect for sunny days at the beach, no?

See-through clothes are the future!

It's time to accept it. Fashion has pretty much no boundaries anymore, so we might as well jump into the deep end and don the most outrageous clothes possible. Take these see-through pants, for example. Because having your legs out in shorts just isn't enough anymore.

It's all fun and games until it actually happens, right?

And it seems as if the fashion gurus have heard this conversation and brought the invention to life. Forget lace shorts and make way for these...

If you're looking for a way to upgrade your wardrobe this summer...

I may have the perfect item of clothing for you if you're brave enough.

And this is another one for you fellas...

If you consider yourself pretty trendy or just downright courageous, then "MaverikSwim" has the perfect buy for you. Introducing: the "Berlin Transparent Waterproof Beach Short."

But apparently, these this venture into the fashion industry is about to blow up so grab a pair while you can.

For some people, this might not necessarily be considered "new."

We know transparent clothing has been a weird fetish in other aspects of the fashion industry, but to us normal folk, we're wondering what our reactions would be if we encountered a random guy walking down the street in a pair of these?

"These can't possibly make into mainstream fashion!" But according to reports, retailers have been selling quite a few pairs of these bad boys this summer. They are also available with neon orange trimmings. I'm sure those are pretty popular too... Yikes.

It seems as if men want to walk around showing their underwear with pride...

And who are we to judge? Though I would recommend wearing something underneath them... Going commando might earn you a night in a cell for public nudity. And trust me, you don't want to be wearing a pair of these in prison.

This is the only thing that bugs me about them...

The price-point for these shorts is unreasonable. For $26.99, you would expect to get more than a Saran-wrap looking pair of boxers with neon edges, right? Or am I just being a bit pushy?

It's an interesting concept, to say the least.

With major retailers like Amazon selling and shipping these to the US, I wouldn't be surprised if the invasion of transparent swimming shorts actually caused a national crisis.
Buy Now

And if you're not into these... check out some of these other bizarre fashion trends that will have you reeling.

Oh God, I can't believe how many of these even passed the drawing board, to be honest...