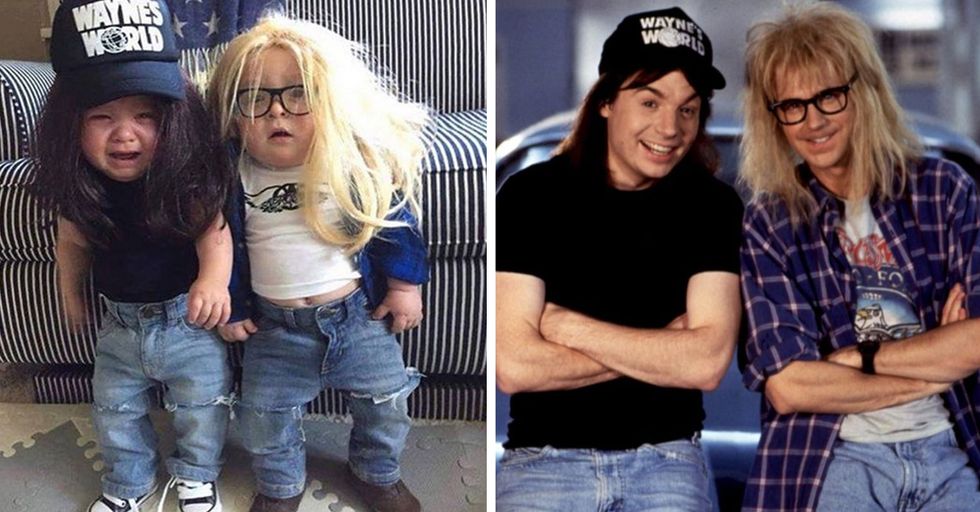 The Halloween season is among us, so if you have not already started hardcore planning your Halloween costume, it may be too late for you. Real devotees of the spooky holiday had their costume on lock months ago. They have planned and purchased, painted and stapled, and they are almost ready to unleash their genius on the world. But does your costume have nearly as much pizzazz and panache as these kids'?

No offense to you, but I kind of doubt it. The kids in this gallery killed Halloween with their creativity and outside-the-box thinking. Sure, some of them were probably too young to come up with their costumes on their own. Some of these kids may have been dressed by some particularly creative parents. But that doesn't matter. What matters is that these kids were along for the ride. They came to Halloween ready to win. "But Halloween isn't a competition!" you may yell. No. Not if you're a loser it isn't.

Get ready for a parade of cuteness.

Halloween is the best because kids everywhere get so creative with their costumes. These costumes are some of the best we've ever seen.

When you can't decide if you want to be Daryl Hall or John Oates, you go as both of them. Obviously. Wow, we started off strong.

Wayne and Garth from Waynes's World is one of the most classic Halloween costumes out there, but something magical happens when you put these clothes on babies who clearly don't want to be dressed up right now.

The kid is a genius and he wanted to go dressed up as a fart for Halloween! Complete with an air horn and everything.

Ooh, this little kid looks so delicious! I just want to slurp her up!

This kills me. That kid wanted to dress up as that character from the insurance commercials. Incredible.

This kid went as a full-on Sharknado for Halloween! Amazing costume from an even more amazing cinematic classic.

When your kid is confined to a stroller for Halloween, you dress it up as a sewer grate and slap a clown wig on your baby. It's just what you, as cool parents, have to do.

I cannot get enough of tiny little children dressed as old people. It never gets, well, old.

Succulents are like, so in right now, and it would be so trendy and cute for your kid to go trick-or-treating on Halloween as a hip potted plant.

I wonder what came first: the idea for this costume or the realization that this little girl looks like a young Drew Barrymore!

Look at this kid with the last minute, minimal effort win! I just hope kids weren't stealing coins off his back all day long.

I mean, just look at the eyes of this little girl. This costume is all about power and strength! You can't beat that.

This costume includes two things I'm a major sucker for:

The dinosaurs from "Jurassic Park"

This is the best dinosaur costume ever because if you are a dinosaur in captivity, you just have to stay put and get rolled around town. It's perfect.

This is very clever. It would be even more clever if inside the trenchcoat were six dogs pretending to be a human man.

Look, she wanted to be a road for Halloween! Her wish came true and she's clearly ecstatic about it. Let her have this!

I pity the fool who didn't have the foresight to dress their child up as Mr. T for Halloween! The belt buckle gets me every time.

When I was that age, The Goonies scared the crap out of me. That kid is cooler than I will ever be.

Dodge, duck, dip, dive, and dodge! Dodgeball is a classic, and this kid dressed up as a roided out Ben Stiller brings me great joy.

Remember Napolean Dynamite? If only like, broke the entire country. This kid plays the role with perfect reluctance.

Again, I cannot stress enough how funny fake facial hair on babies is to me. Do it well. Do it often.

Look, every single one of us is going to end up an old crazy cat lady one day. Love that this young one is embracing it at such a young age.

Most babies are bald, which makes this the absolute perfect costume for them. I can't get over that tiny pair of glasses.

He's even got the glare down pat! Amazing. I love that floating shark in the back too, although if this were my costume, I'd forget about it and scare myself approximately a million times.

Well this is just about the cutest thing that I have ever seen that also somehow makes me hungry.

I reiterate my previous statement: You cannot go wrong with fake baby facial hair. Share this with someone who has a kid to dress up this Halloween!