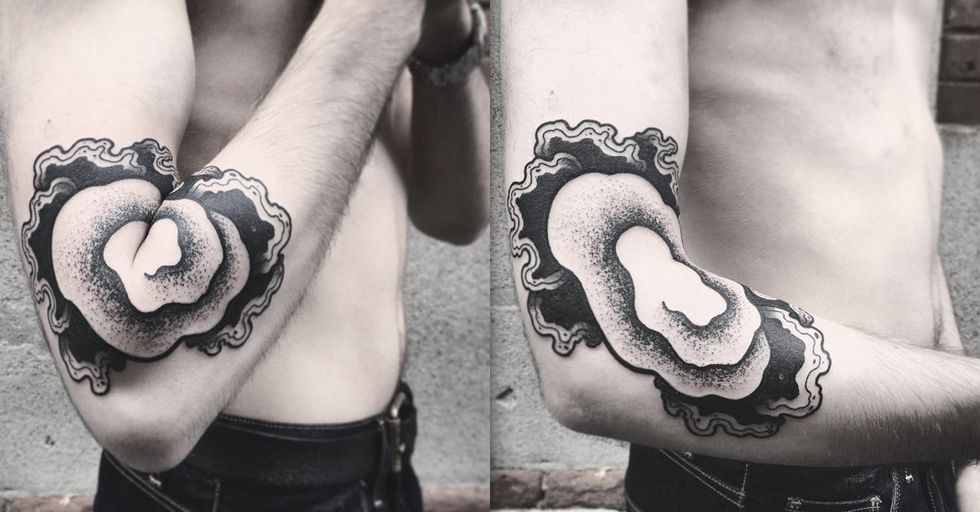 Clever Tattoos That Aren't What They Seem at First Glance

Tattoos are really an incredible art form. There are so many different possibilities when you are working with ink on skin. And although tiny, minimalist tattoos are totally having a moment, this is not a gallery of eensy-weensy cutesy tattoos!

The tattoos in this gallery truly work with the canvas they're on to create incredible illusions and clever designs. For some of these, you will see that when the person bends their knee or their elbow, their tattoo transforms into a totally different picture. This is a far cry from the little hearts or anchors you're seeing on many wrists these days. These are huge statement pieces with something to say.

Some of the other tattoos in this gallery are straight-up optical illusions that will mess with your mind and change what you think is possible for the human body.

It might take you a minute to comprehend these tattoos.

They are wild. They are unexpected. And, they are ridiculously impressive.

This cool design looks like a perfect spiral when this person's elbow is bent, but check out what it looks like when it's extended in the next photo.

There is nothing off or odd about this tattoo. It totally works in both positions. That is no small feat.

That is quite a serious fish, and although you may not realize it at first, its placement on the elbow is quite important.

When you open it up, it is also a fish, but a totally different-looking one! It takes some amazing skill to get the eyeball to line up perfectly.

The bird bursts through.

I love a good tattoo that looks like it's actually emerging form someone's skin. And if that skin looks all cool and futuristic-like because it's made out of squares? All the better.

I know it looks like someone is actually disassembling the skin of a normally-tattooed man, but it is, in fact, more tattoos.

Listen, the Starship Enterprise is all about traveling to places no man has gone before. So could it one day reach the edge of space and actually come out of a man's tattoo? I mean, it's possible, isn't it?

Get out of here, bee.

I don't know what I'm looking at with this tattoo, but I am both transfixed and certain it is an important vessel to deliver the information that will be crucial to the survival of humanity.

"Now YOU get to see the skull."

At first I thought this dude just got a tattoo and then had his finger stretched too far (perhaps from doing the all-time dad favorite "pull my finger" bit?). But then he pointed and it all came together.

This is so awesome.

Levar Burton, who played Kunta Kinte in the movie Roots has a tattoo that can be read as either Levar or Kunta, depending on how you look at it. - rexmons

But how do they do that?

These tattoos change color based on blood pH change and metabolite levels. - _WildForever_

It only looks simple.

Put this SpongeBob tattoo under a blacklight and it goes nuts. Very cool.

All right, that's it. When they're pulled off well, embroidery tattoos are officially the coolest kinds of tattoos.

I would love to get this tattoo, but I'd worry about too many people in my life seeing me typing and throwing water on my laptop to try and extinguish the candles.

Don't stop looking at it until you've solved it.

I actually hate this optical illusion tuning fork tattoo. If it were on my body I would never get anything done, because I would only be staring at it and trying to figure out how it exists.

The notion that some people are secretly walking around made up of book pages is very strange, and now, thanks to this tattoo, it's something I have to consider whenever I meet someone new.

I just want to reach in and grab it.

Does the person who has this tattoo ever wear tank tops? And if they do, are they ever able to get just one moment's peace without having strangers trying to reach inside their arm?

Imagine having a hole like this in your hand. What would you store in it? My first thought was that you could use it like a drink-holder, but then I was like, why wouldn't you just hold that drink? It'd be more cumbersome than it's worth.

This tattoo moves the longer you stare at it. Its either an optical illusion or the tattoo of a wizard (it's fair to assume that wizard tattoos move just like wizard pictures do).

There's something so cool about seeing what appears to be a normal tattoo broken up by expert-level 3D-style tattooing. I never want to stop looking at it.

I am doing my best — my absolute best — to figure out why any woman would get this tattoo, and I am coming up blank. I mean, on a man it'd at least be ironic.

This tattoo is obviously rad as hell, but it does have one drawback — this woman can no longer use the old "hey buddy, my eyes are up here" line.

Rocket Power was such a dope show.

As if having a tattoo of Reggie from Rocket Power wasn't dope enough, the fact that it looks exactly like a stitched patch makes it extra dope.

Snakes. Why'd it have to be snakes?

Without question, the coolest part of this tattoo is how the forearm muscle tricks the eye into thinking the snake is actually coming out of the arm. I spent a good 45 seconds thinking "no way is this a tattoo. There's just no way."

In what is (I think?) a reference to a Pokemon, this tattoo looks like someone took a big steel stamp, skipped the ink, and just pressed it into a dude's arm for six hours.

Um, your robot is showing.

Great, I'd just gotten used to the idea that people might have books underneath their skin, and now I've got to deal with the idea that they might by old steampunk robots? When will it end?!

I wouldn't go near that if I were you...

Sure, it might seem fun to boink the circle on this guy's head, but what are you going to do when you get sucked in like a tissue dropped into an airplane toilet, huh?

You've got something on you there.

If I ran into this girl in real life, I would absolutely try to brush this tattoo off her shoulder, and then be very embarrassed I tried to do so.

This tattoo makes this leg look like it was carved by a master craftsman.

Can you solve the ancient puzzle?

The way that square seems to fit inside that hollow makes me want to pull it out, hold it in my inventory, and look for a square-shaped hollow with a circle inside it, and swap them out.

Obviously this is a super cool tattoo for any Dragon Ball Z fan, but I wish the dude would turn his hand towards camera a little so the optical illusion would be flawless. Right now it looks like Goku is simultaneously trying to give a thumbs up and deliver a palm strike.

Here is another majestic fish that looks perfect when this woman's knee is bent and she's in a squatting position. But what does it look like when she's standing up straight?

Why, an intricate, super cool conjoined fish, of course! What an awesome looking and amazingly detailed tattoo!

You've got to watch the video of this tattoo being revealed. At first, it just looks like an abandoned building with waves crashing into it, but when he bends his elbow, you see its face!

Apparently, this tattoo artist likes drawing fish. Maybe because he's so insanely good at it. But if you think this fish won't translate when the arm is extended...

Do you see that? Now it's a fish with a cityscape in its eyes. Which makes me wonder... is this fish flying through the air?

There is something so wonderfully magical hidden in the middle of this tattoo. Who knew what a fish could be hiding?

I absolutely love and totally fall for designs that work no matter which way you look at them, and this skull castle tattoo is no exception.

On their own, these arm tattoos look like crabs or some crustacean. But the second you bring them together, of course it's a dragon.

That moon has an expression on its face that's like, "Go on, walk up that mysterious staircase. Nothing bad will happen to you, I swear!"

This tattoo is amazing and mesmerizing in every single position. I think it's because of that intense eye in the middle.

No matter what angle you look at this tattoo, you'll see a bunny with a unicorn horn. But if this person's knees are bent, its ears are back!

When the knee is bent, this looks like a beetle with a giant eye on its back. But when the leg is straight, this bug is in flight. How cool!

Eye of the beholder

There's something so whimsically spooky, and cool about this tattoo...in both positions. I think it's all those little eyes surrounding the big one.

Just look at this majestic beast! It looks perfect in both positions. This is so cool. And now, for my next illusion...

It looks like you can just grab a chunk of his arm, right?! What a trip to see a design like this on a human body.

Wow, I cannot look away from this design. It makes the skin look so textured. I just want to reach out and touch it, but that is not acceptable since I do not know this person.

Contrary to what this tattoo makes it seem like, there is no actual hole in his arm. It's just an illusion!

Okay, this tattoo is actually insane. The shadow work is so impressive and terrifying. This looks like something out of The Terminator.

Not only is this a wickedly-clever optical illusion, but also the whole thing happens to be made out of 10,000 dots. Insane.

Sure, at a first glance, that looks like a handprint, but if you look closely, it looks like two people holding hands and walking.

It's a gorgeous, huge owl, but it also looks like a thumbprint, doesn't it? This is one of the most unique tattoos I've ever seen.

How cool is it to have a blurry 3D image tattooed on your body? I wonder if it really works with the glasses. I bet it does.

Honestly, I don't think I understand everything that's going on here. I could look at this picture for hours and not truly comprehend the whole thing.

His skin looks wavy! How?! It's amazing. I don't know if I could have a tattoo like this because I'd be too distracted looking at it always.

Ah yes, the classic optical illusion. I have to stop looking at this elephant's legs or I will never get anything done. Share this with someone who appreciates great tattoos!