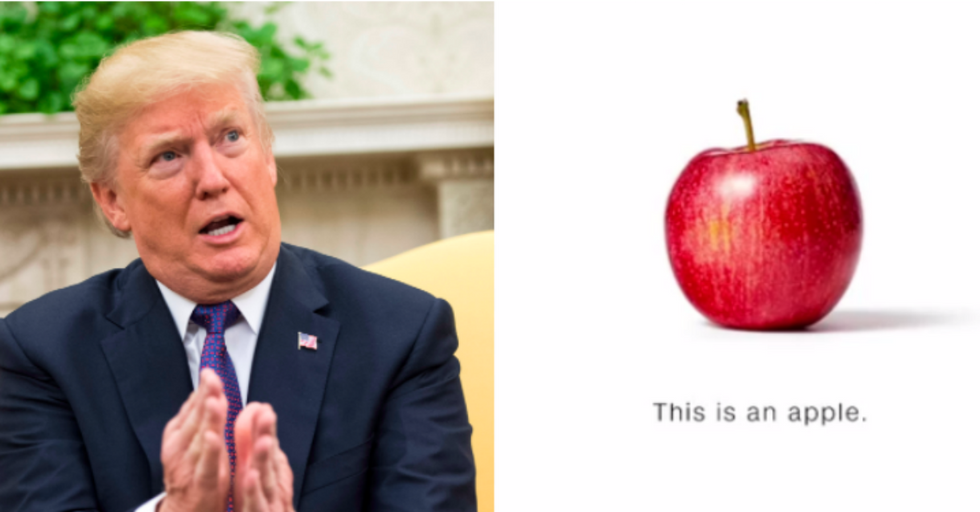 Donald Trump and "Fake News" are like peanut butter and those fake plastic grapes that your aunt has in a bowl on her dining room table. One is tan and probably sticky, and the other is a poor attempt to convince you of class.

Trump's only defense against the horrible things he's done as president (and before) is to yell and scream that centuries-old respected news organizations have tossed all journalistic integrity out of the window to make up stories about him. He's cried "FAKE NEWS!" at practically everything. This is the guy who spewed birther movement lies for years. He's lied to the faces of the American people so consistently for so long, and his "fake news" obsession is yet another manipulation.

CNN has had just about enough of that, so they launched their #FactsFirst campaign and folks, it's pretty great.

There are too many "fake news" Trump tweets to choose from. But here's a recent one:

The true horror of Trump's "fake news" obsession is that there are still people who believe him. We should be able to believe the President of the United States, but we cannot, and now every day has become an uphill battle for news organizations, who are just trying to get a portion of the American public to accept basic facts as truth.

That's why CNN launched its #FactsFirst campaign, which manages to make a whole lot of sense and totally skewer Trump without ever mentioning his name.

On October 23, CNN pinned this video to the top of their Twitter page. The stark white screen showing a lone red apple is eye-catching, sure, but it's what happens when you click "play" that's really juicy: A voiceover and subtitles tell you, "This is an apple. Some people might try to tell you that it's a banana. They might scream banana, banana, banana over and over and over again. They might put BANANA in all caps. You might even start to believe that this is a banana. But it's not. This is an apple."

It's that simple, folks. Trump is constantly trying to tell us that apples are bananas. News publications like CNN are doing their part to make sure that the American people know that apples are, in fact, apples.

Please share with your factually challenged friends, relatives, coworkers. There are plenty around us lately.… https://t.co/SoyAo9KkWN
— Don Lemon (@Don Lemon)1508761767.0

We live in a world in which a White House advisor went on national television and claimed that there is such a thing as "alternative facts." We live in a world in which the president repeatedly publicly disputes the accounts of a grieving military widow and a U.S. congresswoman. Facts matter. Facts are important. Facts are the only thing that will save this nation from crumbling in the hands of a reality TV star.

Another fact that's important to address: CNN and other news organizations are not infallible:

They make mistakes because they are led by and comprised of human beings. But it's so important to believe the people who try to spread the truth and regularly correct their mistakes as opposed to those who deny what's real in order to not take responsibility for their actions.

And that's why #FactsFirst is so poignant.