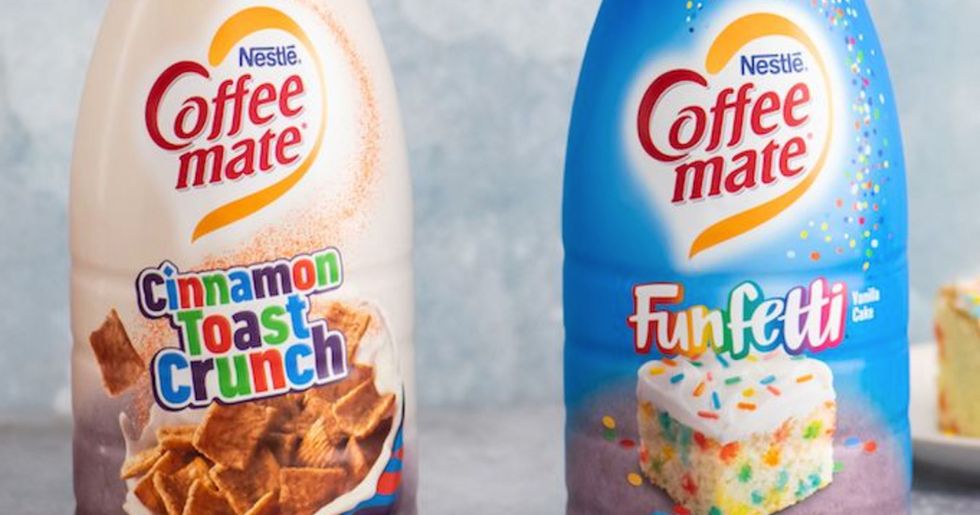 Calling all coffee lovers! There are some new kids on the block that you will wanna check out.

With the festive season just around the corner, it's time to spice up your life with a spiced-up coffee. And what better way to sweeten your day than with a tasty coffee creamer? Frankly, if there was ever a time to join the coffee-creamer bandwagon, it's now.

Coffee-Mate has continuously stayed on top of their game with their slew of impressive and imaginative flavors. Twinkies flavored coffee, anyone? But their most recent release, we think, is by far the best.

Keep scrolling to see some of their most treasured inventions, and the new creamer flavors that have got us very excited for their release...

Where would we be without a cup of coffee?

Here in the U.S. we live and breathe coffee. It's become an important part of our daily culture.

What makes a good coffee?

The secret to a good coffee is all about preference. Of course, good beans and the right creamer helps...

Coffee-Mate has the creamer market covered.

People sure do hold Coffee-Mate's creamers in high esteem. I mean, people on Twitter are even raving about the sugar-free flavors?

Red velvet and coffee are a good combo.

But what about if you could combine the two?

Coffee-Mate has made it happen.

Now you can get red velvet inside your coffee.

This minty, chocolatey, coffee mix sounds a bit much too me...

According to fans of the flavor, this one is a winner.

Well, it's a good job Coffee-Mate is now selling it all-year-round.

You won't have to just wait for the Christmas months to get your hands on this popular coffee-creamer flavor.

Halloween might be over but that means something exciting...

You can probably get pumpkin spiced creamer on discount.

Are you a fan of Snicker bars?

Who isn't right? Snicker bars has everything... from nougat, chocolate, and peanuts, it's the perfect chocolate bar.

But how would it fare as a coffee-creamer?

Well, I wouldn't dip a Snicker bar into my coffee... Then again, it clearly has it's choclatey fans somewhere!

Strawberry cheesecake is a distinct flavor.

Not one you would necessarily associate with coffee...

Those Coffee-Mate inventors really are ambitious when it comes to thinking up new flavors.

But why not try toasted marshmallow creamer in your mocha?

Impress your friends, show off to your colleagues...

Let everyone know that you make the ultimate mocha beverage.

Creme Brulee in your coffee you say?

Never in a million years...

Coffee-Mate made it a reality.

This one is one of the most popular creamers on the market.

The most popular of all Coffee-Mates standard flavors is the classic french vanilla.

If you're thinking of dipping your toes...

I'd recommend you start your creamer journey with french vanilla.

However, if you're looking for something a little different, (and haven't got time for breakfast)...

This new flavor will give you your morning cinnamon crunch fix with your coffee hit.

Or if you'd rather have something a bit more indulgent...

Why not try this delightful funfetti flavor creamer? One of the best things about home-baking is licking the Funfetti frosting mix out of the bowl... Now you can get it in your coffee! Our prayers have been answered by the Coffee-Mate angels.

Look out for these tasty new flavors in a store near you soon.

Get them while you can in stores across the U.S. What other coffee flavors have you tried? Keep scrolling to read all about how you can now get Twinkies flavored coffee...