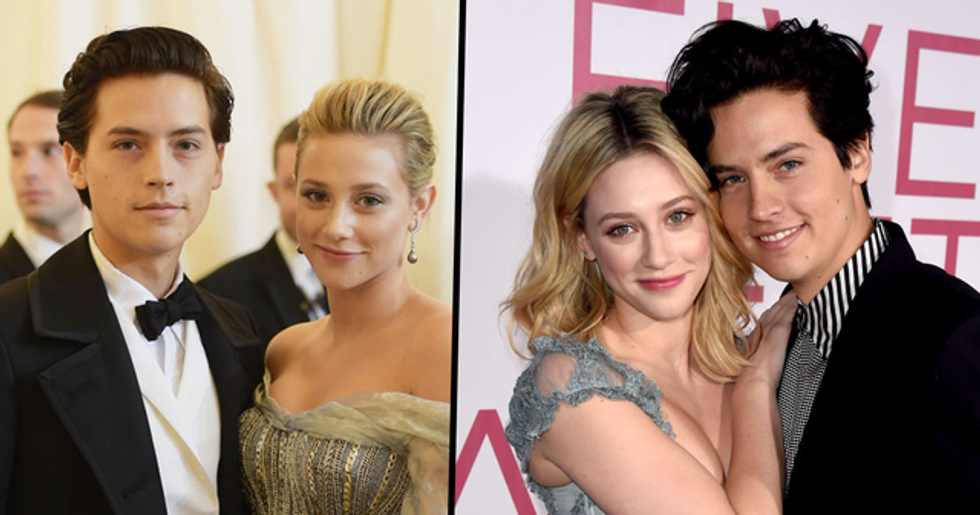 Cole Sprouse and Lili Reinhart Split After 2 Years of Dating

Riverdale fans around the world have been left broken-hearted following the latest news about Betty and Jughead's real-life counterparts. Cole Sprouse and Lili Reinhart met when filming the teen comic-book melodrama and have been dating for two years. But a representative for the two has announced that the pair have finally called time on their relationship. The reasons for the split are not yet known, with sources simply claiming that the two have split and are no longer living together.

But as filming for the next season of Riverdale gets underway, Bughead shippers are hopeful that this isn't the end for the couple.

Cole Sprouse had an early start in the world of acting.

Many of us will remember him for his childhood role as Ross's first child, Ben Geller, on '90s sitcom, Friends.

His best-known role may be alongside his twin brother, Dylan, in popular Disney Channel series, The Suite Life Of Zack & Cody.

But Sprouse is now synonymous with another role.

Based on characters from the original Archie comics, Riverdale is a super successful teen-drama television series by The CW.

The series opened to a fair amount of critical acclaim.

But since the first series, it has attracted some criticism from reviewers, who find the show to be overly dramatic, schmaltzy, and unrealistic. Nevertheless, fans of Riverdale are pretty dedicated, and the show has just been renewed for a fourth season.

Alongside Sprouse, the series features an ensemble cast.

KJ Apa plays the role of Archie Andrews, Camila Mendes plays Veronica Lodge, and Lili Reinhart made her television debut in the role of Betty Cooper.

And there was one aspect of the show that kept viewers coming back.

The blossoming relationship between Betty and Jughead was something that Riverdale fans were here for - even giving the two the "ship name" of Bughead.

Riverdale fans were also intrigued as to whether the real-life counterparts of these loved-up characters were also falling for one another. The rumors began when Sprouse started posting beautiful snaps of Reinhart on his Insta.

Some even had pretty gushing captions.

Which many believed pointed at the real-life relationship between the pair - although both Sprouse and Reinhart remained tight-lipped on the situation.

And soon enough, they'd collected enough information to pretty much confirm that the pair were together - including this jokingly thirsty response by Reinhart to a particularly weird selfie by Sprouse.

For many, this was the first real piece of evidence.

At Comic-Con in 2017, eagle-eyed fans noticed that the pair seemed to be gently caressing one another's hands - presumably assuming that they were out of sight.

For a long time, the pair refused to confirm or deny.

Although last summer, Riverdale co-star, Madchen Amick, told Entertainment Tonight, "It's great. I mean, they didn't talk about [their relationship] the entire time, until just recently. So, it's nice that they're able to now, like, be public with it, so it's not so under wraps. Behind the scenes, they're so sweet with each other and they're both just exceptional people."

And the same year, the two made their first public appearance.

They attended the 2018 Met Gala together - and looked much closer than just good friends during their posing session on the red carpet.

Though it wasn't always plain sailing for the couple.

"Lili was a tough egg to crack, she's very shy at first, reserved, and I think it was about halfway into the first season she started letting people in truly," Cole told Entertainment Tonight. "And she's one of those people that consistently pushes me to be better at the arts that I'm pursuing, and that's just the kind of person she is, she inspires excellence out of everybody she works with."

Reinhart had a similar level of reservations.

"I thought his voice was annoying," Reinhart shared. "That was my first impression, I was like, 'That guy's got an annoying voice.' And now it's grown on me I guess." "Cole is, one of the smartest...the smartest person that I'm friends with. He's incredibly passionate about art, about photography, about acting that."

While the pair were private, they did start to share more about their relationship.

But it seems that the love between the two couldn't last.

This week, a representative for the pair confirmed Bughead-shippers' worst fears. The two have gone their separate ways.

After two years, the relationship has been confirmed to be over.

According to E! News, "Lili and Cole broke-up earlier this summer. The two are not living together this season."

Since their split, the pair had been "intentionally keeping their distance from each other."

However, since the announcement of Riverdale season four, the two are back on "much better terms." "Right now, it's unclear where things stand, but it seems [as though] they could be heading back in the direction of getting together."

And the two have been seen in public appearance as recently as July 21st.

Reinhart and Sprouse looked happy together on the Riverdale Comic-Con 2019 panel in San Diego.

So, is there any hope for the pair?

While the two have confirmed their split, the fact that they'll be playing boyfriend-girlfriend again in the upcoming Riverdale season may push the two back together. We guess we'll have to watch the show and see.