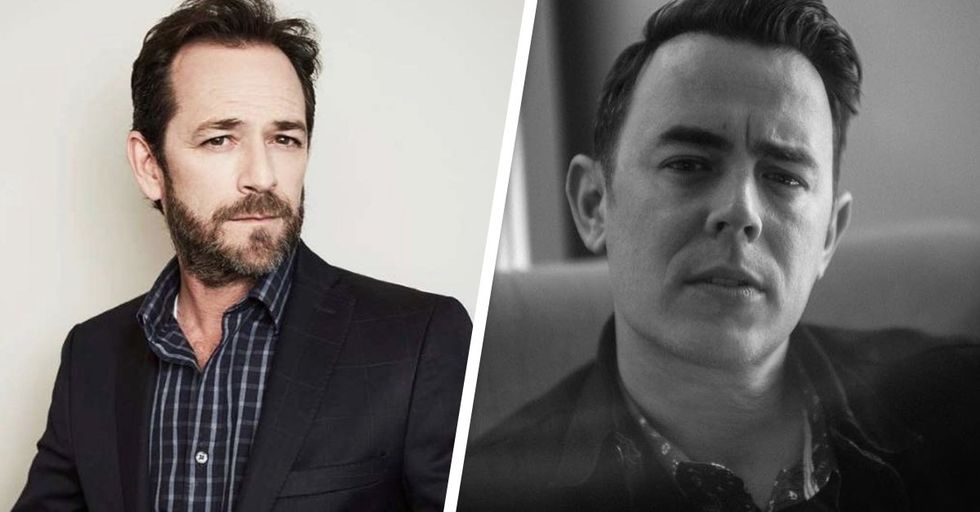 Tragically, actor Luke Perry of 90210 and most recently Riverdale has passed away. The news comes after Perry suffered a massive stroke last week. News of his death came on Monday, as he had died that morning at St. Joseph's Hospital in Burbank. The actor was 52 years old.

Family and loved ones stayed by Perry's side until the end. His children Jack and Sophie, his fiancée Wendy Madison Bauer, ex-wife Minnie Sharp, mother Ann Bennett, step-father Steve Bennett, brother Tom Perry, and sister Amy Coder were all with him when he passed.

So now, condolences and sorrow for Perry's passing have flooded social media. Many are recounting stories of their experience with Perry, and none have anything but kind words to say about him. Keep reading and you'll see what a great person he really was, including a touching story from actor Colin Hanks.

Luke Perry may be gone, but fond memories of him remain.

Perry was a staunch supporter of Hollywood's writers.

And an extremely vocal one, too! Of course, he was there protesting with the writers in solidarity.

Perry was the definition of a good neighbor.

And writer Amy Nicholson responded to the tweet with her own neighborly memory: This is how I'll remember him, too. At your grandpa's birthday being the really nice neighbor who helped with the trash cans. -Amy Nicholson

He was a man of action.

Regarding the heartbreaking news of Luke Perry's passing today, here's my favorite story about the guy: The time a… https://t.co/3t32DVdCan
— Cleuci de Oliveira (@Cleuci de Oliveira)1551740461.0

Theater-goers were lucky that a guy like Luke Perry was in the cast!

This thread by actor Heather Matarazzo is the sweetest.

And who didn't wanna hang with Dylan McKay?!

Here was the best part for Matarazzo:

Luke Perry's kindness is all anybody who met him can talk about.

He visited "One Day At A Time" actor Santina Muha in the hospital.

This is the kind of story that tells you how much Perry really cared about the people he met.

'Riverdale' creator Roberto Aguirre-Sacasa had a great relationship with Perry.

And it shows that Perry truly cared about his work, too.

Did you know that Luke Perry owned land in Tennessee?

These people found out during a massive flood in 2010. And of course, he spent his time during the flood helping people.

He was a model customer.

Not only a model customer but a favorite – because of the kindness and decency he showed the people who served him!

I love how he never lost that 'McKay' coolness!

If something was important to Perry, he seems like he was the type to really go all out standing up for it.

He made his press rounds with grace.

Sounds like he had a lifetime of good karma built up when he passed.

Perry was easy to get along with.

He took time for his fans.

Which not every actor does. But we're not surprised that Perry did!

When Alf LaMont was younger, Luke Perry was a regular at the restaurant he worked at.

And in typical Luke Perry fashion, he really got invested in the young man's life and career.

He was a real gent.

Reporter Tiffany Vogt was saved at a party by none other than Perry. So, we're adding 'gentleman' to his list of qualities.

Take the time to read this full note from author Samantha Joyce:

I wanted to share my story of meeting #LukePerry years ago because I think of it often. He left a huge imprint on m… https://t.co/IsIMcOorex
— Samantha Joyce (@Samantha Joyce)1551725967.0

Fan interactions like this can be so important when we're young. Luke Perry knew that, and it sounds like he did his best to make every fan interaction a positive one.

Now, a story from Colin Hanks is making the rounds.

And rather than remembering Perry's work as an actor, Hanks is among those remembering him for being such a caring individual.

They only met once.

And not on a TV or movie set; the two actors crossed paths while on a flight back from Mexico.

In Hanks's story, Perry intervened when two kids were quarreling.

I only met him once but the story is too good not tell given today's sad events. My wife and I are on a plane back from Mexico. Couple of rows ahead of us, these two brothers, young kids, are beating the hell out of each other. -colin hanks

Their poor parents are powerless to stop the crying, yelling and screaming. If you're a parent you understand. Sometimes there's nothing you can do. It was like this for close to two hours. Then about 10 minutes before landing it starts to get real bad. -colin hanks

But a hero emerges...

Out of nowhere, a man comes from first class. Hat, beard, sunglasses, blowing up a balloon. -colin hanks

He ties it off, hands it off like he's holding out a sword to a king. Kneeling, Head down, arms up. Kids calm down in milliseconds. -colin hanks

And the rest of the passengers needed a break.

Plane damn near bursts into applause. 15 minutes longer and it probably would have started WWIII, but we landed before that could happen. -colin hanks

Hanks then spoke to Perry personally.

We get off the plane, are waiting on line in customs. Finally, get a good look at the guy and I say to my wife "Holy shit. I think that balloon man/hero" is Luke Perry". As luck would have it we end up standing next to each other. Out of the blue he turns to me and says some kind words about Fargo, which kinda blew my mind. -colin hanks

And Hanks was a fan.

I start singing his praises about how long I've admired him and also about the move with the balloon. "That's a pro move! You can't teach that!" I say. -colin hanks

But here was Perry's secret:

He tells me he always flies with a couple of balloons for that very reason, to give to screaming kids. Don't know if that's true, but have no reason to believe it wasn't. Guy seemed like a true gent. Gone way too damn soon. Also, I'll be damned if I don't start traveling with some spare balloons ??? -colin hanks

How many of us can honestly say we've been packing for a flight and thought, 'But what if there are kids on the plane? I should pack something to make them happy, too.'

By all accounts, this is just the type of person Perry was.

Kind and thoughtful, and he didn't help people for personal gain...he just helped them because it was right. Share this story with your friends! A person this awesome deserves to be remembered.