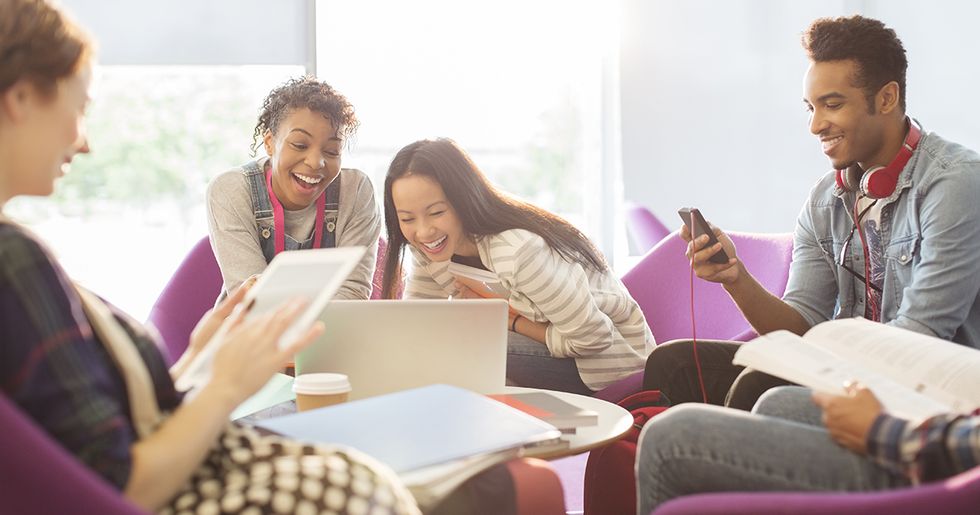 College Student Fails That Will Make You Cackle at Your Desk

College is such a unique time in a person's life.

You go from being somewhat reliant on your parents for everything from food to transportation...to having free rein over your entire life. All of your neighbors are people your own age, and the decisions you make (and the friendships you forge) can affect the rest of your life. Some people really thrive and make the most of their newfound freedoms. Others, not so much.

For some people, college is just another place where super awkward things happen. The only difference is that now they're considered adults and they may have to deal with more of the consequences than they experienced back in high school. I guess the takeaway is that some awkward people are just awkward no matter where they go or what level of schooling they're pursuing.

These college students definitely take the cake when it comes to awkward situations, though.

That's not a laptop.

went to class today really thinking i had grabbed my computer off the kitchen counter https://t.co/tVirXyEOS1
— Abby Dermody (@Abby Dermody)1539113511.0

Eagle-eyed readers will gather that that is, in fact, a cutting board. It's a very useful tool! But not when you need a laptop.

i have some professional concerns about my official school email address https://t.co/rIenQDsn7a
— kass money (@kass money)1536786274.0

Hey, it's not that bad. You can just never send an email to any of your professors or classmates while you're enrolled. No big deal.

To be fair, this pretty much sums up my own college experience. Worried.

Once the clock reads 6:01, you might as well wait until 7 to actually start studying. Next thing you know, it's the next morning.

I want to sound bold, but not cocky. Confident, but not brash. A lot depends on this.

How'd that get there?

I'm so glad none of my friends knew about this prank back when I was in school. I will now protect my resumé with my life.

The new version is much more akin to the way I was feeling upon graduating with tens of thousands of dollars in debt.

This is so embarrassing that even though I have been out of school for years, I panicked for a second imagining this happening to me.

If you ask me, group projects should be illegal. This is unconscionable.

The teachers have become the students. Everyone pack it up and go home. Education is canceled.

I like to imagine that it was an entire leaf of lettuce resting on the top of this girl's head. It's just a funny visual.

Some people have all the luck. Not this guy, though.

College in a nutshell:

This isn't even the most scandalous thing I've heard about when it comes to college campuses. It's actually pretty tame.

I have no idea what I'm doing.

Just pretend! Fake it to you make it...or flunk out.

I think even the strictest professor would excuse this absence. Good thing you thought to snap a picture!

This video is long, but so, so worth it.

I am so impressed with this kid's ability to keep a straight face. I almost believed him!

One of those days.

Honestly, any day that goes by that you don't see someone in a costume is considered kind of a weird day when you're in college.

I would love to see that presentation on red pandas. They really are the best animal.

If I had to grade papers during my off-hours, I would also definitely have a beer.

The best part about this question is that you really can't get it wrong! That'll be good for your grade.

As long as no one shows up to his office hours, this is pretty darn brilliant. I bet the other professors which they had thought of it.

You might think you can surreptitiously browse the Internet during class. You cannot.

I assume he wears this shirt every day and just waits for the chance to show it off. That's what I would do!

I don't know what happened to this professor, but I would definitely give him plenty of space for a few days.

You know what they say! If at first you don't succeed, change your major.

It must be finals week.

When you're a broke college student, you don't have money for fancy tools like ice scrapers. You just use what you've got!

There are mistakes, and then there are MISTAKES. This was one of the latter. Share this with someone who's currently in college!