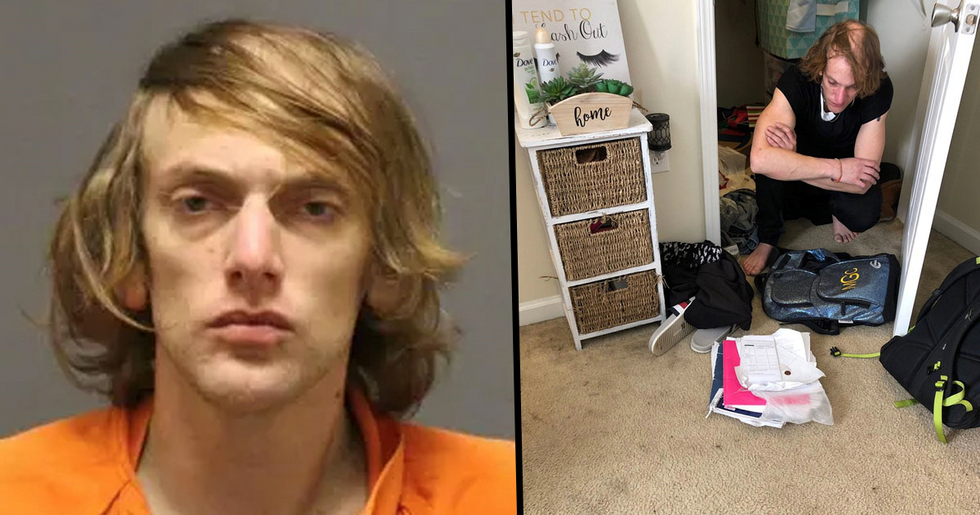 College Student Finds Man In Her Closet Wearing Her Clothes

A student from the University of North Carolina at Greensboro came home for her lunch break last Saturday to find a strange man hiding in her closet.

The 30-year-old male has been identified as Andrew Clyde Swofford who already had, at the time of arrest, several outstanding charges against him including previous breaking and entering, larceny and failure to appear in court.

Andrew, who refers to himself as Drew, was found by the student wearing several of her clothes and holding a bag with more of her belongings in it.

How do you think she reacted to this weird (and slightly terrifying) incident?

{Spoiler: It's not how you would expect.}

When you find something unexpected in your closet.

You open your closet and expect to find your clothes, shoes, maybe a bit of dust but instead you find something super weird and unexpected. And sometimes a little bit frightening.

Who put these things here?

When you go to clean out your cupboard after several years and find stuff that is 100% not yours. How the f*ck did these things end up here?

Because you just never know when you are going to get locked in your bedroom with the munchies. Let's just hope they found a tin opener too.

Oh dear husband, why? Why for the love of god are you doing that?

You can always blame it on an Ambien but seriously, no-one wants to see their life partner taking a whizz on their best shoes. Put it away please.

When you think you are married to a clean freak but actually they have everything they have ever owned stuffed in one hidden closet. Monica, how could you?

When you make an error of judgement when drunk and of course claim that sober you would never do a thing like that. To be fair to this dude, we once hid a 20 inch meat feast in our closet. Drunk us didn't want to share.

Well, there are definitely worse things you could find than this.

Yes, a life size dream catcher is a bit strange but at least it's designed for good and not evil.

Promotional condoms and an ex boyfriends license are amongst the weird things I found in my closet today.
— Steph (@Steph)1328826246.0

Firstly, well done for practising safe sex. Secondly, apologies, but you sound like a bit of a stalker. We really don't believe you just happened to have your ex's licence. But you can't have everything so still, good on you for the rubbers.

Possibly the scariest thing we have ever heard.

@RadioBethany @Lorraine_Ruth Used to play on a Ouija board as a teenager. Weird things happened. We snapped the boa… https://t.co/sAPSmooYja
— Jay (@Jay)1522864194.0

Surely this is the supernatural at work? Ouija boards should not be messed with, let alone snapped in half and buried. The spirits are definitely messing with you now.

It could be rats.

Or it could be your broke-ass roommate stealing your stash and blaming it on a rodent. You weren't very specific on what these hidden pills in your closet are actually for. Tut tut.

But this is definitely the weirdest by far.

This is Andrew Swofford. A UNCG junior got home on Saturday, to find him in her closet, wearing her clothes. @myfox8 https://t.co/n4PFMhtW2b
— Hayley Fixler (@Hayley Fixler)1549307604.0

A college student from the University of North Carolina at Greensboro came home for lunch to find a 30-year-old man hiding in her closet.

At first she thought the noise was a raccoon.

Obviously he must have been scratching and scurrying around in there. Perhaps looking for something in particular? Or maybe he was just lost.

Having previously heard weird noises coming from her closet, the student suspected she was being haunted.

She then tried to communicate with whoever was in there.

When she opened her closet she was confronted with Andrew Swofford, who was wearing her clothes, socks and her sneakers as well as holding a bag containing several other of her belongings.

The student, who has asked for her identity not to be revealed, then calmly contacted her boyfriend using her Apple watch.

She's definitely a braver girl than us, as we'd have been screaming the place down and throwing anything we could find at this guy invading our personal space.

And then it got even weirder.

Drew then asked if he could use the toilet, which he does so wearing one of her hats! And when he comes out he tells her she's pretty and asks if he can give her a hug. Obviously she declines this kind (read terrifying) offer.

Unsurprisingly Drew fled the scene when the boyfriend arrived.

Although we imagine it was a lot less exciting and macho than this. He probably just jumped out of his skin and then ran out of the door, tripping as he made his escape down the hallway.

She later explained to the police that she was not scared and that he did not act violently or threaten her in anyway.

Maybe not. But finding a 30-year-old man wearing your clothes in your closet is surely intimidating enough? Well, it would be for us. We would be sh*tting our pants. Literally.

Drew is being held at Guilford County Jail and it is yet unknown whether he has hired any legal representation. It seems unlikely that someone will pay for his bail.

He was already a wanted man.

Even before this incident, Drew had several outstanding charges including identity theft, obstruction, failure to appear in court, possessing stolen goods and breaking and entering.

To add another twist to the tale...

Despite her initial bravery, she remains scared and wants to move.

The student has since been sleeping in her roommate's bed as she is too scared to sleep alone and has complained that her closet stinks. Maybe there was a raccoon in there after all. Or Drew just needed a bath.

If my closet spoke back to me, I'd be out of there pronto.

Seriously, who in their right mind asks if there is anyone in their cupboard and when someone replies, doesn't immediately get the hell out of there?

But she took the time to take a picture!

Smile for the camera. I mean, we know that people want to update their social media accounts with every detail of their life, but priorities please! There is a man in your home!

I mean it's the stuff from nightmares, isn't it?

Monsters under your bed. The boogieman in your closet. Except this boogieman is a 30-year-old, long-haired man with a fetish for women's clothes and closets apparently.

Really that's your take from this story?

We get that being house proud is important but; a. She is a student b. We think she has more pressing matters to deal with, don't you?

Seems like some teenage angst to us. Except the dude is 30 years of age.

We can just imagine the lyrics now. "I hid in your closet. You thought I was a ghost. And now we're a couple. But I still love you the most."

Or maybe a cross dresser? Whatever his sexuality or gender preference, why not just buy your own clothes rather than hide in someone's closet and steal theirs??

And some soft souls, even feel sorry for him.

Lots of people have bad sh*t happen to them, but not many deal with that by hiding in poor, unsuspecting young girl's closets.
20%