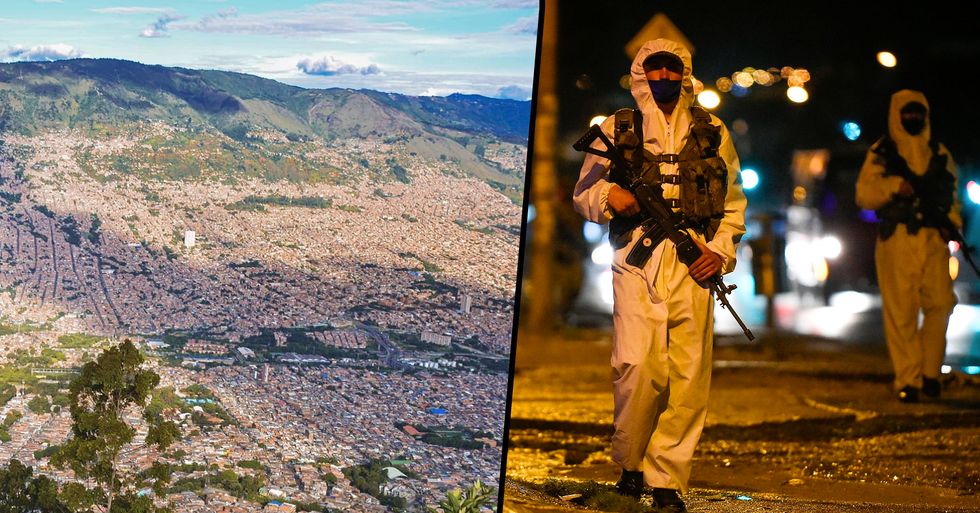 During the coronavirus pandemic, the use of face masks, as well as other social distancing rules, has been the center of an ongoing debate but now Colombia has taken things to the extreme.

According to many sources, cartels are taking care of lawbreakers...

Some countries have taken things to the extreme now...

For people not following lockdown rules.

The pandemic has fully taken over.

For example, in some retail stores like Costco, customers are required to wear one. And not to mention public transport. It can be annoying but it's something we all have to do for the greater good.

They can also make it hard to breathe.

But there are some people still not following any of these rules.

But Colombia has taken things to a whole new level after there have been multiple deaths linked to the cartels patrolling the streets.

Human Rights Watch have warned that there have been at least 9 people involved in these incidents.

They have claimed that these individuals have all been "assassinated" in 3 separate incidents for either refusing to wear masks or not social distancing.

A town on the Pacific coast has even been taken over by gangs who have enforced their own rules.

@MailOnline Extreme but effective. No problem with social distancing in Columbia
— MrUpperty (@MrUpperty)1594889901.0

They have banned local residents from fishing and have enforced a 5 PM curfew which is much harsher than government-imposed curfews.

At one point, even one community leader was murdered last month.

This was because he sent a written letter that alerted authorities to illegal activity occurring in the area. Edison Leon sent a warning out to members telling them about a group called "La Mafia." He was killed.

Another community leader spoke to The Guardian about the issue:

The article talked about how the area has been completely been taken over: "They have shut down transport between villages, and when someone is suspected to have Covid-19 they are told to leave the region or they will be killed."

"And people have no choice but to obey because they never see the government here." So count yourself lucky you're not there. Wear a mask. Stay socially distanced. Keep scrolling to see what happens to people that don't wear facemasks in this country...