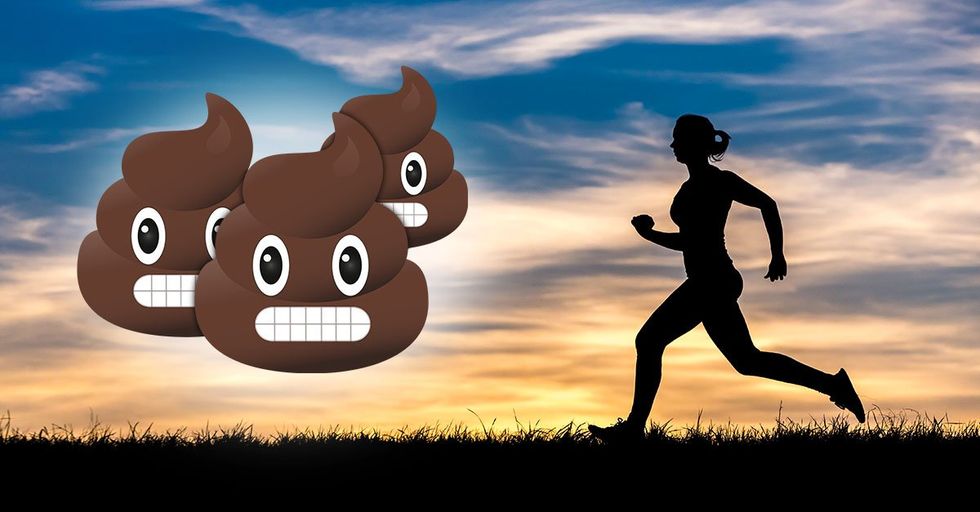 Last week, the frightened screams of her own children summoned Cathy Budde into her front yard. The kids shrieked that a woman was pooping in plain sight.

At first, Cathy didn't believe them, but she quickly found that the kids were not mistaken. There was indeed a woman squatting and defecating in front of her house. Cathy told KKTV that she thought it was just a bizarre, one-time incident. She assumed that the lady would surely never show her face in that part of town again.

But oh, was she wrong.

The lady, who has since been nicknamed 'the Mad Pooper,' has been showing a lot more than her face.

She's been showing her behind all over town. The woman has been pooping in public places around town in the midst of her daily runs. Runs as in jogging runs. Not, uh, the other kind. Sorry, we had to doo-doo that. Sorry again.

At first, Cathy assumed that the woman had to relieve herself so badly that she pooped on the sidewalk as a last resort.

That was not the case. The lady, seemingly unfazed and unashamed, keeps coming back to poop in front of Cathy's house week after week. There is a public bathroom right across the street, and the Mad Pooper is making a clear choice not to use it.

The family has found a human poop in their front yard at least once every week for the past seven weeks.

That's seven unwanted piles of feces, people. Seven poops too many. Cathy said she has caught the Mad Pooper in the act at least three times.

Cathy has tried leaving notes for woman, asking her to stop, but they haven't worked.

“I put a sign on the wall that’s like ‘please, I’m begging you, please stop,’ Budde said. “She ran by it like 15 times yesterday, and she still pooped." Cathy snapped a picture of the perpetrator as she fleed the scene. The Mad Pooper is a middle-aged brunette woman, who has been seen wearing a spandex running outfit.

It seems like the spandex would make things difficult...no?

Like, if you're pooping in a speedy, high-stakes situation, where you may need to pull up your pants any moment, wouldn't you want to choose something a little more breezy? Cathy's front yard isn't the only place the Mad Pooper has used as a public toilet...

People have seen her unload excrement all over town.

She brings toilet paper or napkins with her, and leaves them - along with the crap - wherever she scats. The pooping is premeditated.

Neighbors have seen the Mad Pooper doing her thing in backyards and by a Walgreens.

There were public bathrooms near all the places that the Mad Pooper has been a-poopin'. She's been known to make multiple scat-stops on a single run. What kind of fiber is this lady eating, and why and how much and what and how and WHY? We have a lot of questions.

Is this a revenge plot? Did someone at Cathy's house wrong the Pooper?

What about the other houses? Is this a drawn-out plan, or simply a pastime? We're not sure why she's doing it, but we are sure the behavior is unprecedented in Colorado Springs.

Cathy and other residents talked to the police about the incidents.

Sargent Johnathan Jarketti said, "It’s abnormal, it’s not something I’ve seen in my career... for someone to repeatedly do such a thing ... it’s uncharted territory for me."

People had a lot of reactions to the news.

This guy was not expecting the Mad Pooper to be a woman. Would it be less gross if the perpetrator were a man? Well, surprise surprise sir, females poop too. Some of them more than others. People have a lot to say about this even quirkier version of Forrest Gump...

Tristan here thinks the Mad Pooper is the biggest story of 2017.

A lot of things have happened this year, and its almost over, so that's saying a lot! It's all a load o' crap, if you ask us... see what we did there?

Mike wants to rename the criminal...

We've got a few ideas of our own: the Clandestine Crapper, the Secret Sh*tter, the Ninja Nasty-doer, Public Enemy #2, the Furtive Feces Expeller, Al Crappone, Pooplo Escobar, and Bowel-ly the Kid.

Someone loved the story so much, they made the woman her own fan T-shirts.

...which you can find in here, in case you were curious. Are you a fan of the Mad Pooper? You've gotta hand it to her: she is consistent and dedicated to her cause. She gets out and runs every day, and that's more than we can say for ourselves. We're sure her neighbors would appreciate it, though, if she'd cut the crap.