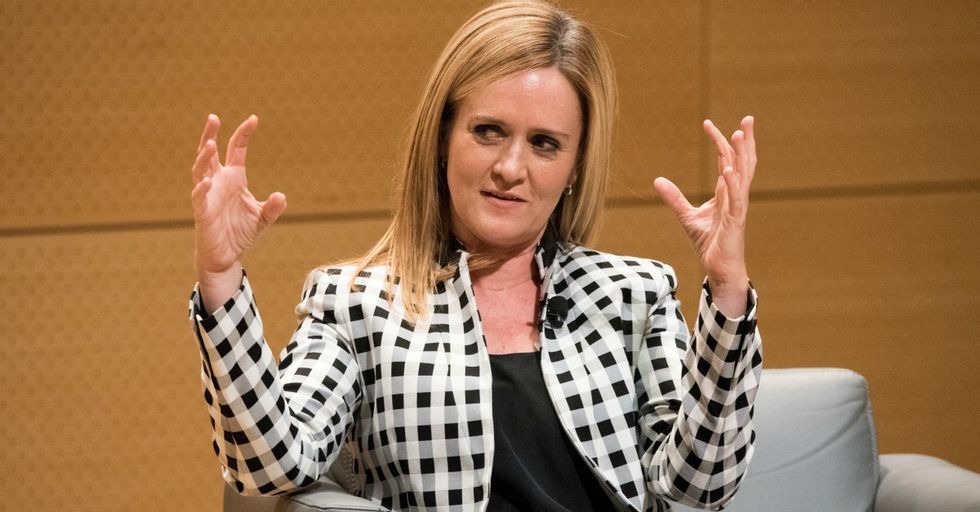 Protesting – it's our God-given right as Americans, alongside gift with purchase and five dollar foot-longs (no matter what Subway says). Recently, a very specific type of protesting has been storming the media – kneeling. On Friday September 22, Donald Trump ignited a furor when he went on a tangent during a stump speech for senate hopeful Luther Strange, stating, 'You know what's hurting the game –when people like yourselves turn on television, and you see those people taking the knee when they are playing our great national anthem.

Then he uttered the words that lit a thousand fires. 'Get that son of a b**** off the field right now, he's fired. He's fired!'

Everyone knew he was talking about Colin Kaepernick.

The outspoken quarterback had been quietly blacklisted by the NFL for protesting ongoing violence against people of color by taking a knee, and was enemy number one of conservative football fans. But he had a lot supporters. In response to Trump's statement, Stephen Curry of the Golden State Warriors doubled down on his refusal to visit the White House, and NFL players joined Colin Kaepernick in taking a knee during the national anthem.

This, of course, was not taken well by Donald Trump.

In the opening salvo of what would become a raging Twitter debate, he uninvited Curry from the White House, breaking with tradition, which demands that NBA champions visit the White House to celebrate title wins. Curry, a two-time MVP,  expressed disappointment with the President's statements. 'I don’t want to go,' he said. 'That’s kind of the nucleus of my belief… [...] That we don’t stand for basically what our President has – the things that he’s said and the things that he hasn’t said in the right times, that we won’t stand for it.'

He was quickly supported by LeBron James.

As another vocal detractor of Donald Trump, LeBron James waded in with a timely tweet, reminding everyone that you can't actually uninvite someone when they've already declined the invitation. This was not the first time James has spoken out about the president. In remarks following the events at Charlottesville, James tweeted, 'Hate has always existed in America. Yes we know that but Donald Trump just made it fashionable again! Statues has nothing to do with us now!'

These comments fanned the flames of a growing Twitter controversy.

Journalist and activist Shaun King had long been advocating a boycott of the NFL over the organization's blacklisting of Colin Kaepernick. When Trump's comments exploded the Twittersphere, he urged players to join Kaepernick in his silent protest.

But Trump waded in again, stoking the fire.

In a tweet-storm early Sunday afternoon, Trump lambasted the protesting athletes, suggesting that their protest was not about race, but about disrespecting the American flag. He pivoted the protest into a war-cry for his supporters and urged them to boycott the NFL. Thankfully, comedian Samantha Bee was standing by with the perfect response...

On Monday, Bee tweeted a list of all the acceptable ways to protest.

It was a classy clapback that perfectly illustrated the crazy double-standards people of color faced when protesting. In fact, it was something of a manual - an explanation of the surefire strategies to get conservatives protesting your protest.

No way! This is pretty much number one in the anti-protest playbook. Gather in loud numbers, break a few things and your protest will be derided as a riot courtesy the conservative press. Unless, of course, you're white and belong to a militia in Oregon.

Wait, you say you want to turn an awards ceremony into a protest?

Certainly not! That's the type of thing that will get you condemned by those pearl-clutching purists who think entertainment should not be sullied by politics. They'll call you a 'finger pointer' who 'throw[s] around hate.' Unless, of course, you're not a person of color.

Take a step back. Way, way back. This is uncalled for, and quite frankly, unwanted. Make this type of mistake, and you'll have trolls swarming out the woodwork crying foul. 'This is just another stupid social justice warrior stunt,' they'll howl. 'Why can't we just have good clean commercials?' Because any commercial that deviates from the heteronormative, white prototype is certainly not "good" and "clean."

What about school walk outs?

Surely those have to be kosher. Who among us hasn't left classes in the middle of the day to play socially responsible hooky complete with signs and microphones? Nope. Unless you're protesting the rising ungodliness of the American school system, fall back. All the way back. Just drop off the face of the earth, while you're at it. But that's not all...

Word? What about speaking out after Hamilton?

Nope. Before Hamilton? Not even. Duri- Dude, no means no, alright!

But surely, a little light kneeling during the anthem is okay.

Not unless you're Tim Tebow. Taking a knee during the anthem is sacrilegious, even if the whole standing for the anthem thing only became a thing in 2009. So is making a hashtag about it, and forget inviting your friends. Matter of fact, don't even think about the word knee, because the football gods will strike you down with arthritis and mess up your rheumatism for good measure.

What about sitting during the anthem?

Sitting is okay, right? It's like, the basic human position that's not standing. Wait what? Also not okay? Copy that.

What about declining White House invitations?

What if you're feeling sick, and you just don't want to go out? Or maybe you're just not into the guy who lives in the house and just sort of want to chill with your friends? What about that? Wait, not even Steph Curry can do that? Damn.

Okay, so violently demonstrating with tiki torches, not okay, right?

Wait, what? Both sides? They're fine people, you say? Ohhh, finally we get it...