If These Things Happen at Your Workplace, It Might Be Time to Leave | 22 Words 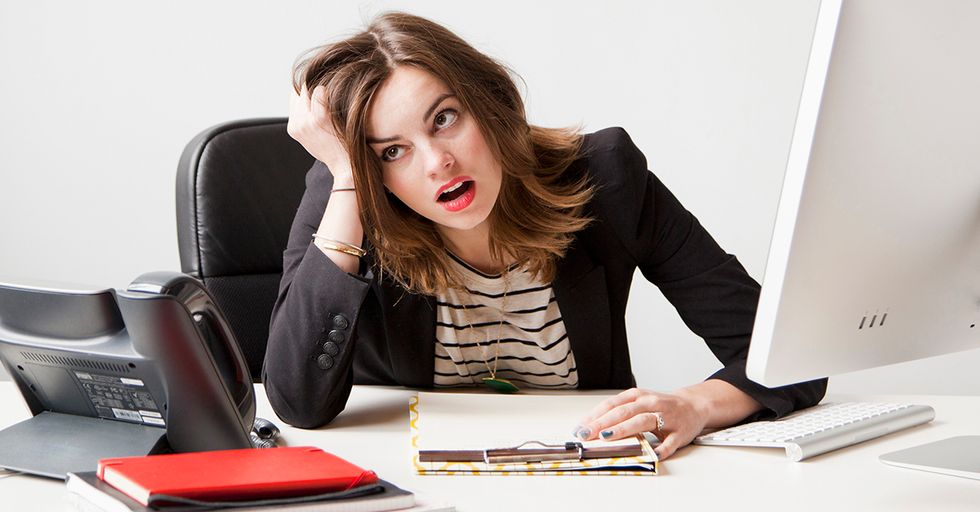 If These Things Happen at Your Workplace, It Might Be Time to Leave

It's a fact of life that everyone has to suffer through some awful jobs before they find the one, right? I'm sure we're all familiar with the infamous line-up of jobs that we've all held at some point in our lives. There's the standard fast food job, the retail job, or the ever-popular choice of "working for mom or dad."

The more jobs you have, the better you'll become at noticing which workplace characteristics will make you happy, and which will leave you desperate to get out. One Redditor (FlamesofIce) figured that the Internet has some experience with bad jobs and asked the all-important question: what red flags do you look for when you're finding a new workplace?

The question we all want to ask.

One of the best parts of the Internet is that you can combine the wisdom of thousands of people to answer questions. "What is a massive red flag about a new workplace?" is one that we definitely want to know the answer to.

This is one you may not have thought about but makes total sense.

People are either there forever or they leave immediately. What does that say about the workplace?

Redditor, dopkick, explains that those who have been there forever do their own thing, while new hires are left in a sink or swim mentality.

But it's about more than just the turnover– it's why the turnover happens. Other users pointed out that if a company doesn't provide real training they're going to lose tons of employees.

Have you ever been at a job where they appeared to have forgotten you were starting? Oof.

Who are you again?

Even worse than forgetting to train you is forgetting that they even asked you to come in for an interview.

Maybe it's not that they forget about you. Maybe it's that they're too interested in you. So interested that they ask for the login info to your social accounts. I don't even share that with my husband!

"The look of defeat"

Once you make it past the interview, you're then able to get a read on the environment and the employees. If they're all miserable, chances are you will be too.

A few users had some really dark stories, which seem to be a common occurrence for those who've worked at a call center.

Others pointed out that the phrase "work hard, play hard" is just a way to say everyone's an alcoholic.

Protip: if management thinks that the solution is for you to fake it harder, you should probably leave.

Sometimes they're not actually interested in solutions, like when you're told "but that's not how we do it!" once you suggest another option.

The solution is more notes

Somehow we all know exactly what kind of note they're talking about here.

Let's get into the REAL stuff

Ok, we've made it past the interview, the training, and the basic passive aggression. Here's where the true nastiness comes out. See? Pay is based on sales.

I can't imagine working somewhere where they lie about hours, don't follow policies, and change your job after you've started. Ick.

We've all had a boss like this! They need to be in control of everything, but they get irritated when you don't show initiative. Tell me what you actually want!

It's all about the culture

And if the culture says "you're stuck with us and all our lack of boundaries" then you should run.

Some drama for your mama

Speaking of office culture, you KNOW that if your coworkers are giving you mysterious warnings about who to trust and who not to trust it's a bad sign.

Wait, who's my manager?

For some companies, unclear expectations are a way of life. If you end up with a cool "double manager" situation it's time to get out.

Or perhaps the expectations are TOO clear

And those expectations are that the manager needs to know everything all the time including when you go to the bathroom. We're not children here, we can manage our own bodies.

Things get way worse though

When you start getting into money problems is where it all goes really bad. If they can't pay you? Run for the hills.

Always have it in writing

Somehow a paycheck mysteriously disappeared. That's a hard pass from me.

Wait, is this a red flag or the best job ever?

Just kidding, it's clearly a total cluster of a situation that you should not be a part of!

Seriously, what kind of a boss complains to their employees ABOUT other employees?

Can I have some pills?

We've found the worst boss ever, and it's this loser who asked for some leftover pain pills.

Apparently, it's normal for employees to be full on sobbing in the office. Carry on, there's nothing to see here.

The sweet smell of nepotism

Maybe the bosses aren't awful, but they are all related.

But what if employee pays employer instead?

I truly hope none of you have fallen for the B.S. that is paying someone else to hire you. It is a Bad Sign with capitol letters.

Sometimes you just have to laugh

Methinks the company doth protest too much.

If this feels all too familiar

Maybe it's time for you to start sending out a couple of resumes.