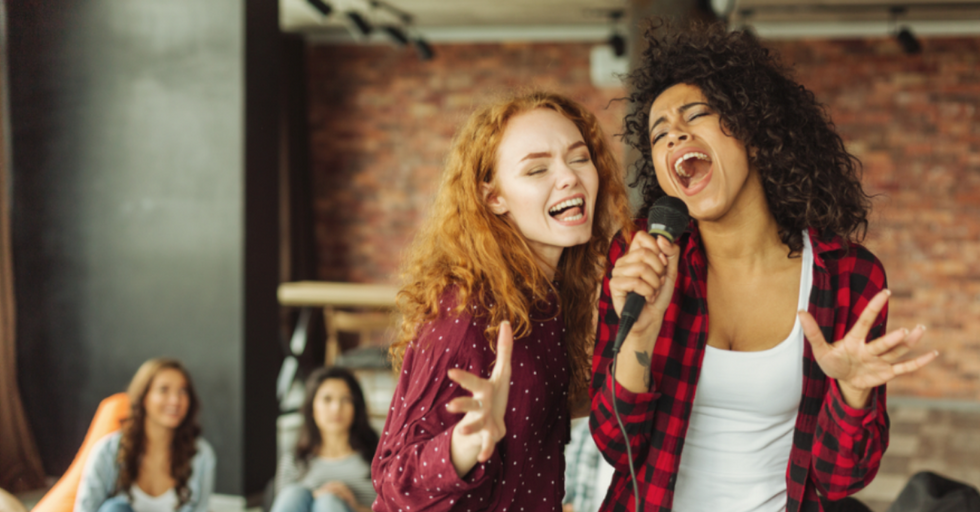 Commonly Misheard Song Lyrics That Will Make You Laugh Hysterically

Dancing alone in your room, cruising down the highway, abandoning your inhibitions in a karaoke bar—there really is no bad place to belt your heart out. Singing along to your favorite song can motivate you to run that extra mile, mend a broken heart, or give you a healthy outlet for those feelings you just couldn’t find the words for on your own. Even if you don’t remember exactly how that song goes.

Lyrics are only one piece of any song, but they’re often the biggest clue into its message, tone, and the artist’s intention. Sometimes that intention can get lost in translation, and fans have come up with some pretty interesting misinterpretations of hit songs over the years. Here are some of the most bizarre, outlandish, and unbelievable things people have heard and repeated while listening to popular songs new and old. At least they made them their own?

“See that girl, watch her scream, kicking the dancing queen"

No, thankfully Abba’s “Dancing Queen" isn’t about a young woman kicking and screaming. The real lyrics from the disco hit are, “See that girl, watch that scene, dig in the dancing queen." A little worried about everyone who thought they were grooving to a song about a girl fighting for her life!

“Excuse me while I kiss this guy"

In Jimi Hendrix’s hit “Purple Haze," he politely asks for permission to “Kiss the sky," not “this guy." He did, however, embrace the misunderstanding and poke fun at it during a few of his live performances.

“All the lonely Starbucks lovers"

Taylor Swift’s “Blank Space" is about seeing your crush while you’re waiting in line to order a Venti Soy Chai, right? Wrong. Despite many hearing an ode to Starbucks lovers, T.S. actually sings, “Got a long list of ex-lovers."

Nope, Bon Jovi is not famous for a nudist anthem. The lyrics to his classic “Livin’ On A Prayer" are actually, “It doesn’t make a difference if we make it or not." At least the misheard lyric is halfway there. Get it???

“Here we are now, in containers"

It checks out that the non-conforming grunge trailblazers in Nirvana would sing about their disgust being put in a box, but their hit “Smells Like Teen Spirit" is not about containers. “Here we are now, entertain us," is the correct line, and by far not the only one misheard in this mumbled tune. Often sung as, “I’m a lion, I'm a vinyl, I’m a Skittle, I’m a beetle," the chorus actually goes, “A mulatto, an Albino, a mosquito, my libido."

“Bleedin' with your eyes, gonna make you zombie someday"

Is Queen’s classic “We Will Rock You" about an undead apocalypse?? Nah, just a regular old case of a misheard lyric. Freddie Mercury actually sings, “Pleadin' with your eyes, gonna make you some peace someday." Far less terrifying.

“Need a lot of cheese up in my egg"

Don’t feel too bad about mishearing this one. Sean Paul turns out melodic bangers, but ones that lyrically tend to give us a bit of trouble. “Like Glue" is, unfortunately, not an ode to the omelette. The actual lyric, “I need a lot of trees up in my head," refers to smoking marijuana.

"It's not fair to deny me, with the cross-eyed bear that you've given me"

Alanis Morissette is known for her emotionally charged vocals and poetic lyrics. However in her breakup anthem “You Oughta Know," the Canadian songstress is not longing for a ‘cross eyed bear.’ Morissette actually sings, "It's not fair, to deny me, of the cross I bear that you gave to me."

"I wear goggles when you are not here"

Macy Gray’s hit “I Try" is an emotional earworm that’s been featured in a slew of TV shows including “The Office" and “The Last Man on Earth." But is she singing about a secret desire to wear goggles all alone?? Not quite. "My world crumbles when you are not here," are the actual lyrics in a song about trying to play it cool in front of your crush while you’re dying inside.

“So much to do, so much to see, so much wrong with Nick from the Backstreet"

Whoa, did Smash Mouth call out Nick Carter in their timeless hit “All Star"?? Sorry to disappoint the gossip lovers out there, but the Backstreet Boys and Smash Mouth don’t have beef. At least, not in this song. The real lyrics are, “So much to do, so much to see, so what's wrong with taking the back streets?"

“Living with a lover with a red iPhone"

No, Def Leppard did not predict the invention of the iPhone in their 1987 hit “Pour Some Sugar On Me." The hair metal rockstars are actually singing, "Living with a lover with a radar phone." What’s a radar phone? According to an interview with MTV News, not even Def Leppard frontman Joe Elliot knows.

Madonna’s pop hit “Like A Virgin" wouldn’t make much sense with this misheard lyric. The Queen of Pop is actually singing, “Like a virgin, touched for the very first time." Get it… because.. well, you get it.

Conspiracy theory alert: did this Van Halen song include subliminal messaging planted by Victoria Secret? Nope, we can debunk this one pretty easily. The real lyric, “Panama," is literally the title of the song. Oops!

“And the last known survivor stocks his bread in the night"

We all remember “Eye of the Tiger," the song made famous by Rocky III that tells the story of a man stockpiling loaves of bread by moonlight. Just kidding! The Survivor song is all about fighting for your life and defeating anyone who comes in your way. The actual lyrics are, “And the last known survivor stalks his prey in the night."

John Lennon’s timeless ballad, “Imagine," is not a tune in which he denies being the Star Wars character Obi-Wan Kenobi. The actual lyrics, “You may say I’m a dreamer, but i'm not the only one," are a call for global peace and unity in the wake of the Vietnam War.

“There's nothing that a hundred men on Mars could ever do"

In their unforgettable song “Africa," Toto isn’t challenging the inhabitants of the 'Red Planet' when they say, “It's gonna take a lot to drag me away from you." The real lyric, “There's nothing that a hundred men or more could ever do," describes songwriter David Paich’s love of the titular continent.

Despite the song beginning with a story about a “small town girl" and a “city boy," Journey’s widely loved hit “Don’t Stop Believing" has nothing to do with a gestating baby. If you’ve ever been to a karaoke bar in your life, you’ll know the actual lyric is the inspiring phrase, “Don't stop believing, hold onto that feeling."

“In all that body lotion, somewhere there's a loving flame"

No, the Berlin love song that soundtracked Top Gun’s famous love scene wasn’t an ode to skincare. The real lyrics to “Take My Breath Away" are “Haunted by the notion, somewhere there's a love in flames."

When John Travolta strutted his stuff in Saturday Night Fever, he wasn’t getting down to a song celebrating deception. The lyrics to the Bee Gees’ song “Stayin’ Alive" are, famously, “Ah, ah, ah, ah, stayin’ alive, stayin’ alive."

It’s a pretty darn romantic sentiment, but unfortunately the Rolling Stones’ soul ballad “Beast Of Burden" isn’t about ensuring the one you love never has to eat burnt pizza. There is, however, some debate as to the meaning behind the actual lyrics, “I'll never be your beast of burden." Not even the Stones’ Keith Richards remembers what it’s about.

“Guilty penis got no rhythm…"

This is just… yeah. I would actually love to meet the person who thought this was the lyric, and have a long chat about all the life choices that led them to this misunderstanding. Do I really have to explain that the line in “Careless Whisper" following, “I’m never gonna dance again" is actually “guilty feet have got no rhythm"?? Come ON y’all.

Unfortunately, I do kind of get this. A song called “Get Lucky" could conceivably include this reference. But Daft Punk isn’t singing about a legendary penis. The real lyrics, "Like the legend of the Phoenix," make a lot more sense if you consider the next line - “All ends with beginnings." Context clues, guys.

“You ain't never pornographic and you ain't no friend of mine"

“Hound Dog" would be a very different song if it were about Elvis Presley denying someone friendship because they weren’t “pornographic." Released in 1956, it’s pretty unlikely that any song would be so explicit. The real lyrics are “You ain't never caught a rabbit, and you ain't no friend of mine."

“Take your pants off, and make it happen"

Some of these alternative lyrics really give you a peek into the listener’s psyche. Made famous by its appearance in the movie “Flashdance," Irene Cara’s “What A Feeling" is all about feeling a rhythm so deeply that it makes you “dance for your life" -- which you can totally do with your pants on. The actual lyrics are, “Take your passion and make it happen."

"I got my first real sex dream"

Look, with a song titled 'Summer of 69,’ it’s not totally out of the realm of possibility that a lyric or two could refer to something a little scandalous. But in reality, Bryan Adams was simply singing about getting a new guitar when he said, "I got my first real six-string."

Almost everyone knows the Jay-Z and Alicia Keys classic “Empire State of Mind," so it’s particularly weird that so many people have misheard the chorus since it was first released. Especially considering the phrase “wet dream tomato" is complete nonsense. The real lyrics are, “Concrete jungle where dreams are made of" -- but listen again and tell me you don’t hear wet dream tomato.

What if I told you that you’ve been singing the Baha Men classic, generation defining “Who Let The Dogs Out" wrong since its release in 2000? Although this misheard lyric makes complete sense, the iconic chorus is actually "WOOF! WOOF! WOOF! WOOF! WOOF!" Because that’s the sound dogs make. Can’t believe these guys were a one-hit wonder.

Missy Elliot’s “Work It" is a gorgeous puzzle of a banger that has perplexed bump and grinders for decades with questions like, “Is it worth it?" I’m here to tell you, the answer is a resounding yes. If you don’t know by now, the lyric that follows “I put my thing down, flip it and reverse it," is actually THAT SAME LINE BACKWARDS (or put down, flipped, and reversed, if you will). “Ti esrever dna ti plif nwod gniht ym tup I." Missy Elliot has never lied.