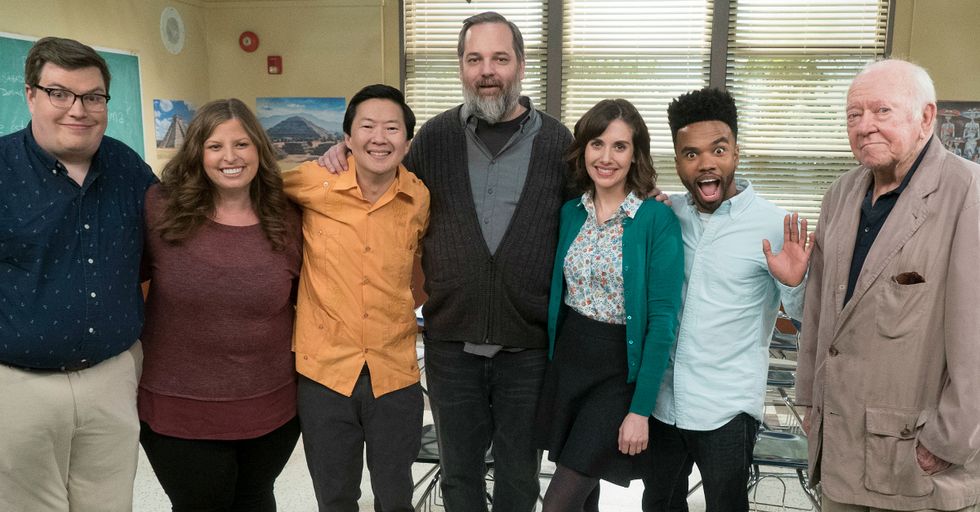 In the last few months we’ve seen a lot of powerful men taken down for allegations of sexual misconducts. And we’ve seen almost as many terrible apologies from those powerful men. There was Kevin Spacey using his apology as a way to come out.

There was Louis CK sort of apologizing but also emphasizing that in case we didn’t know, he was a comedy genius while using the word “dick” as inappropriately as possible.

There was Mario Batali apologizing while simultaneously releasing a recipe for cinnamon rolls.

It’s basically been a parade of terrible apologies, but this week on his podcast Dan Harmon issued an apology to one of his former writers that was actually good (and did not involve any baked goods).

Megan Ganz is a television writer who has worked on Community, Modern Family, and Last Man on Earth.

She was also an editor for The Onion. She’s basically an all around hilarious, talented human.

Recently, she called out Dan Harmon, her former boss, for sexual misconduct in the workplace.

She said he “treated her like garbage" and “crossed lines" with her when she worked on the TV show Community with him.

Dan Harmon is creator and producer of the TV show Community as well as the co-creator of Rick and Morty.

He also hosts a podcast called Harmontown (because like cartoon cities, it’s basically illegal for podcasts not to end in the word “town").

In his podcast this week, Harmon responded to Ganz's accusations, and he took a very different approach than most of the men in Hollywood.

First of all, he actually apologized. Sincerely. But not only did he say he was sorry, he took a few minutes to explain what happened and why he was wrong.

According to Harmon, he had a crush on Ganz when she worked for him.

He said that at the time, he didn’t realize why this was problematic. He was in a relationship with someone else, and had a hard time even admitting to himself that he had feelings for Ganz. And Ganz wasn’t interested in him.  So what went wrong? Well...

While there is nothing inherently wrong with having feelings for a co-worker, or even flirting with a co-worker, the problem here, which Harmon acknowledged, was the balance of power and that his advances were not welcome.

Harmon was the showrunner, and Ganz was a writer, and a young one at that. At the time she was in her twenties and just starting her career. Which meant that it was almost impossible for Ganz to know: was she good at her job or was she only there because Harmon had a crush on her and liked giving her extra attention? He said:

The most clinical way I can think of to put it is that I was attracted to a writer who I had power over, because I was the showrunner," he says. “I knew enough to know that these feelings could affect peoples’ faith in my judgement, her faith in her talents as a writer, the other writers’ respect for me, the production, the audience ... So I did the cowardly, laziest, easiest thing I could do when you feel these kinds of feelings: I didn’t deal with them. And in not dealing with them. I made everyone else deal with them. Especially her.

He admitted that he didn’t listen to Ganz when she tried to express that she wanted him to stop.

I just didn’t hear it, because it didn’t profit me to hear it.

This may be the first time a man publicly accused of this kind of behavior has really stepped up and admitted they were really, really wrong and decided to consciously make an effort to stop doing what they were doing instead of trying to justify it or deny it.

I lied to myself the entire time about it, I lost my job, I ruined my show, I betrayed my audience. I destroyed everything.," he says. “And I damaged her internal compass. And I moved on. I had never done it before and I will never do it again, but I never would have done it if I had any respect for women, on a fundamental level.

And and amazing thing happened: Ganz accepted his apology!

In fact, Ganz was the one who brought the podcast to everyone’s attention. She tweeted that people should listen to his apology. You can see her tweets about it above.

Ganz acknowledged that she wasn’t trying to bring Harmon down for his behavior, just that she wanted to be heard, apologized to and believed.

It’s not a lot to ask, but it seems very hard for a lot of men who are accused of sexual misconduct to actually do: give an apology that doesn’t deflect blame, he doesn’t try to justify what he did. He even conveys in the apology he is trying to just say what happened and take ownership of what he did, not explain why he felt he was right at the time. It doesn't excuse what he did, but Ganz said that this apology should be a masterclass in how to apologize, and we agree. You can listen to the whole podcast here. The apology starts at 18:30.