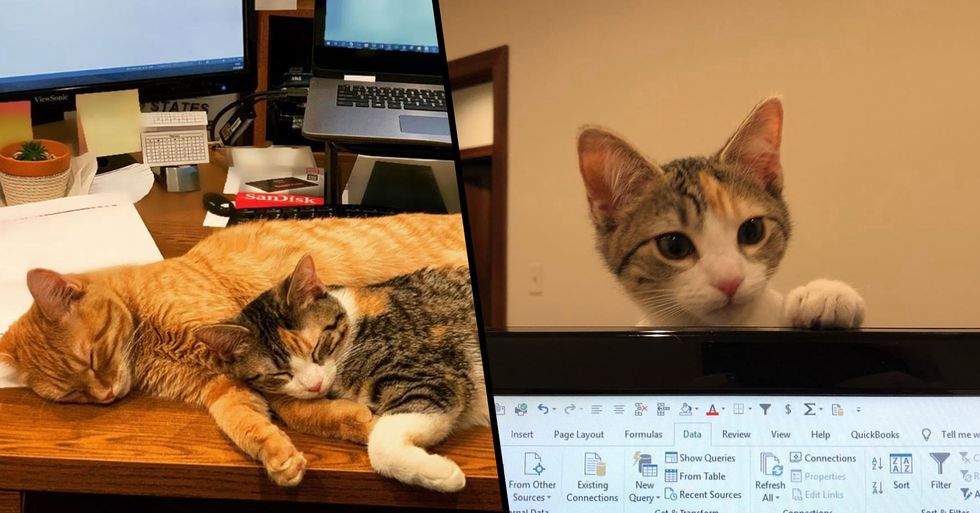 Anybody who works in an office can relate that it isn't always the best of environments.

Being cooped up in an office 5 days a week can truly test a person's patience, and this can ultimately slacken employee morale.

But one company has decided to tackle this problem by adopting 2 office kittens.

Working in an office space isn't always fun and games...

Being in an office generally means you have to get hard at work, and being cooped up in the same environment for 5 days a week can certainly take its toll.

Offices can be generally quite dull places to be in.

But many employers go to extra lengths to brighten up the workplace...

Little things like having picture frames on the walls, plants, furniture, a lick of paint on the walls, and even having the radio playing can instantly improve the atmosphere in an office space.

And a better atmosphere means...

But there's another thing that has been proven to improve office morale...

And that's the introduction of pets.

Having an office cat or dog is a great way to reduce stress...

A study found that when you stroke a dog or a cat, you produce a hormone called oxytocin that makes you feel a lot more relaxed and happy - exactly what we need when we are receiving a grilling from our bosses!

More and more companies around the world have been taking this idea onboard...

And they are all realizing the amazing benefits of having a furry companion in the office.

One company in Ohio decided to join in...

And they adopted 2 office kittens, ironically named Debit and Credit.

And they have become global sensations.

They rose to fame after an employee posted a video of them on Reddit...

And the mischievous little kittens instantly captured the hearts of the internet.

The kittens don't need much to be kept entertained...

And when they aren't napping, they are taking full advantage of the office equipment that is left lying around.

They now even have their own personalized collars...

Which, we must say, are just too adorable.

Their Instagram page now boasts an impressive 45,000 followers... and it's not hard to see why.

And what's even cuter...

The kittens seem to be the best of friends and they are always together.

Keep scrolling to learn about the stray dog that looked after a group of stray kittens in the snow...