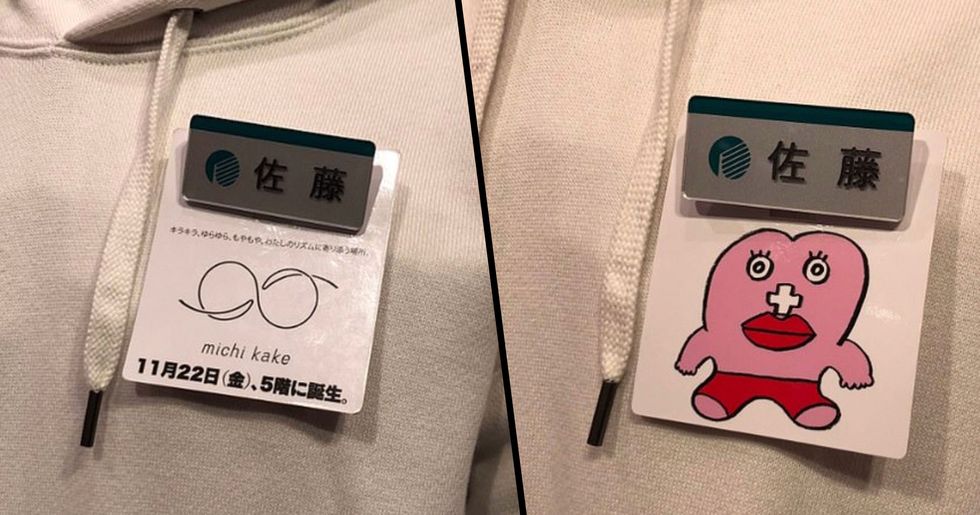 When it comes to discussing the "time of the month", a lot of people get rather uncomfortable over the subject.

But it is a fact of life that women get periods every month, and we shouldn't feel ashamed to talk openly about our monthly occurrences.

One company in Japan has decided to tackle the stigma of periods by encouraging their female employees to wear "period badges" to let others know that it is their time of the month.

Sadly, there is a stigma surrounding the topic of menstruation.

On any given day, around 800 million women and young girls are menstruating... so why is this natural function so stigmatized?

A lot of women feel embarrassment and shame over their time of the month...

In 2017, girls' rights charity Plan International UK spoke to 1,000 U.K. girls aged between fourteen and twenty-one in the U.K. and found that nearly half (forty-eight percent) felt embarrassed about their period.

It has been conditioned to be an uncomfortable subject...

It was also found that only one in 5 girls feel uncomfortable talking to a teacher about their period, and less than a third feeling okay talking to their fathers about it.

This stigma comes with serious consequences.

The silence that engulfs menstruation means girls learning a is reduced to an awkward lesson in middle school, where boys make jokes and girls are introduced to the idea that periods are disgusting and should remain private.

A lot of girls don't even know what is happening when they get their period...

It was found that 1 in 7 girls don't know what is happening when they start menstruating and more than a quarter don't know what to do. There has to be a serious failure somewhere for this to be the case.

Women should embrace the fact that they get their periods...

And a company in Japan has created a way for its female employees to do this.

An attempt has been made to diffuse the embarrassment around periods...

The Michi Kake store, which is in the Japanese city of Osake, sells female sexual health products and they want to tackle this growing stigma.

And these badges are there to tell customers that they are currently on their period.

Of course, the staff aren't forced to take part...

It is a completely voluntary movement and those who decide to take part will wear the little badge next to their name tags.

The company wants people to realize that periods aren't a bad thing.

The badges have Seiri-chan on them - a cartoon character which is known as a symbol for periods and the menstrual cycle in the country.

In Japan, periods are something that aren't spoken about.

Speaking to Japanese news outlet WWD, store manager Takahiro Imazu said: "In Japan, there is a tendency for women's sexuality and periods to be subjected as 'not to be mentioned.'"

Of course, not everyone will be on board with the movement.

"Not all customers will react positively to [this shop], but the fem tech boom is growing, and the values of young people are changing with it."

The people behind the movement are feeling hopeful for its impact...

"I might be going a little far in saying this, but I am excited for it to become a shop for solutions for women's sensitive needs, and to be an asset to the marketplace."

They want people to be more educated on the menstrual process...

All staff, regardless of whether they opt in to the new scheme, will show customers around the shop which is split into four areas - each one corresponding to the stages of the menstrual cycle.
The different sections of the shop include a blue section - this is where products for women who are on their periods will be stocked.

There is also a glittery section...

This section has sparkly decor and is specifically for 'post-period' items. There is also a turbulence section for the time before women's periods start. This, probably related to pre-menstrual tension (PMT) will have products for when some women feel irritable just before their periods start.

It has been designed so women don't feel alone...

Because not everyone experiences smooth sailing when it comes to their periods.

Many find it very strange and a little invasive that people are wearing badges to announce that they are menstruating.

Japan is copping a beating for the Daimaru female employee's idea of women wearing a badge indicating they're on th… https://t.co/zVFeBqAhcY
— KangaeRoo (@KangaeRoo)1574990761.0

Many people strongly support the movement, and many also feel that periods and menstruation should be openly discussed more.

The stigma around periods should end.

At the end of the day, having a period is one of the most natural things in the world, so why on Earth should it be stigmatized?! Dealing with our menstrual cycles safely is super important, so keep scrolling to read about some women that have been warned to not use a vacuum cleaner to "stop" their periods...