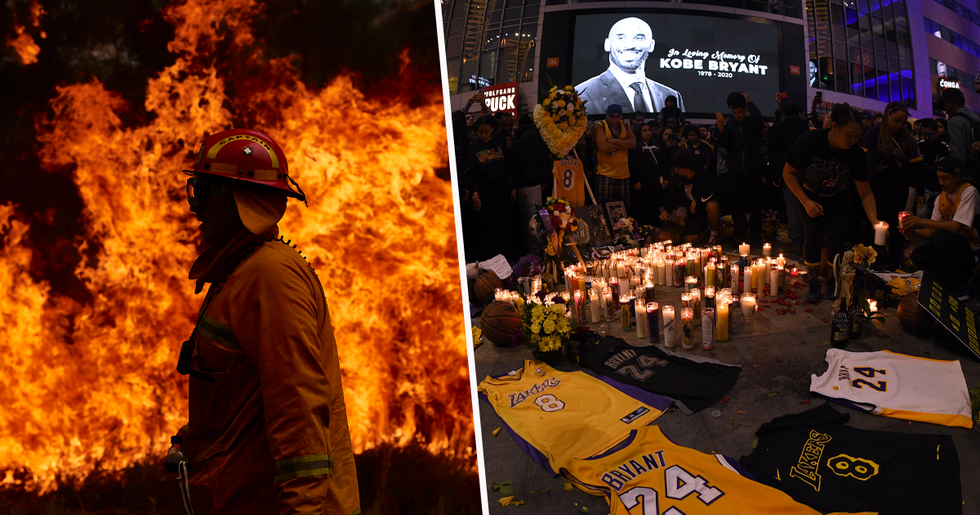 Complete Recap of 2020 So Far Is So Painful to Read

What a rollercoaster 2020's been, and by "rollercoaster", I mean a downward spiral of endless heartaches and sadness. I don't know about you, but I'm ready to throw this year into the trash and put an end to this misery once and for all. But for those of you that want to see it through, this article might crush that last bit of hope as we plan to recap the past 7 months of hell.

A much simpler time for us all... Well, kind of.

Tensions between the United States and Iran reached an all-time peak.

After a US drone strike killed off Army General, Qasem Soleimani, on January 3rd, we were all left fearing for our lives as Iran promised to "make America pay" for their reckless actions. It was rather frightening.

And then came the dreaded Impeachment of Donald Trump.

That whole fiasco lasted a few weeks before it died down the following month.

The United Kingdom left the European Union with a heavy heart after 3 years of constant back and forths.

And on the opposite side of the world, wild bushfires were destroying an entire country.

Thousands of acres of land, as well as millions of animals, were burned in the process.

But while all this was taking place we were unaware of a mysterious disease brewing in China.

But the world went about its day like it wasn't happening.

The first week of February saw Donald Trump acquitted of all of his alleged crimes but that's as good as news gets... If you can even call that good news.

Because right after that basketball legend Kobe Bryant and his daughter died in a tragic helicopter accident.

The news of the horrific accident sent shockwaves across the world as people mourned all the victims' deaths. As well as the Bryants, 7 others lost their lives.

And finally, the word "coronavirus" started spreading as fast as the actual disease...

But it still remained pretty hush-hush until next month.

The entire world went into mass hysteria because "some guy in China ate a bat."

As economies crashed and thousands of people lost their lives, this month was only a pinprick of what was yet to come for the rest of the year.

By the end of the month, our worst fears were confirmed:

We were in the midst of a global pandemic and it was here to stay.

Even though most of the world was in lockdown, spring breakers continued to rally around on beaches, making them prime hot spots for spreading the disease. Not to mention far-right "activists" took to the streets to demand their freedom. Losers.

The phrase "social distance" was coined but that doesn't mean people adhered to it.

Cases of the coronavirus soared nationwide and hit a million worldwide, yet the President was just coming to terms with accepting it as a real disease... Yikes.

Now, if you thought those 4 months prior were anything to go off, then what happened in May should not have come as a shock to you. There was a different kind of political unrest brewing and after the savage murder of Ahmaud Arbery, all hell broke loose and rightfully so.

Then came the death of Breonna Taylor who was shot 8 times while she was asleep.

This was closely followed by the brutal killing of George Floyd, a black man who was killed by a police officer who used his knee to restrain him.

The whole of the world lit up in anger, with many taking to the streets to protest against the treatment of black citizens.

Clashes between protestors and police officers saw multiple deaths across the country. Businesses were destroyed and hell became a place on earth. Racists were exposed, but most of them cried when they were called out. Talks about police reformation started. New training guidelines were in the process of starting and celebrities donated less than 5% of their overall wealth to the cause.

While all this was going on, rather than focussing on the problem at hand, governments started re-opening their countries...

Yeah, I know, you can't write this stuff. 100,000 people in the United States had died and with the pandemic showing no signs of slowing down, governments were forced to pick between the safety of their people or money. Guess what they picked?

Oh, and I forgot to mention that Kim Jong-Un died...

But he didn't really. Next!

In this level of the terrifying 2020 game we're all stuck in, protests continued, with anger continuing to rage across the world. The United Kingdom, Germany, South Korea, were just a few countries on the list that had seen thousands of people take to the streets to fight against racial inequality.

People took problems into their own hands.

Statues of slave traders and confederate figures were slammed to the ground and dumped into flowing waters, never to be seen again. Thank God.

But with the election only months away, Trump started his trial rally in Tulsa, Oklahoma only to have it hijacked by K-Pop stans.

Along with the notorious hacking faction Annonymous, K-Pop stans booked seats to Trump's rally and then didn't turn up. There were so many empty slots that I bet the president had flashbacks to his inauguration. Yeah, sad times.

Puerto Rico was being hit with multiple earthquakes and locusts were swarming the Middle-East...

But that only got 5 seconds in the headlines because who cares about the rest of the world, right?

In Britain, a well-known missing person case found its way into the press again...

But died down quickly when people started accusing the government of using it as a distraction tactic. It really wasn't looking good for Boris Johnson, AKA "a Walmart version of Donald Trump."

Karens and Kens started finally getting called out for their s***.

But they continued being the idiots that they are, refusing to wear masks and calling the police when their lives were being "threatened." Okay, pipe down, Karen.

And finally, health experts warned the world that a second wave is on the brink of coming...

Because we all want to go to bars and clubs so badly.

Out of all the months, July was probably the tamest.

Well, it was reported that Russia was up to no good again...

Firstly they were accused of putting bounties on US troops and then the Brits also found records that they were paying extremist groups to kill British troops too. What the f***?

But it doesn't matter because that's Trump's bestie, he'll stand by him until the end.

Oh and I forgot to mention, Trump's other bestie Elon Musk (and NASA) ended up sending 2 lucky guys into space to get away from all the crap happening down here.

On the topic of friends, Kanye West attended his first-ever rally to endorse himself as President...

But he ended up having a major mental health breakdown and admit he was going "to kill his own daughter". After that, he went off, ranting and raving around on Twitter about how his wife must have cheated on him and something about Shia LaBeouf. Yeah, I'm not sure either.

And I know we're only 5 days into August but we're already done with it.

An ammonium nitrate explosion has just hit Beruit in Lebanon and it has completely devastated the city. Reports state that 100 people are dead while another 4,000 have been injured but that number is set to rise as more and more people are discovered amongst the rubble. So yeah, great news (!)

After all that, any good news?

Well, we're 4 and a half months away from finishing this goddamn year. That's some good news for you. Keep scrolling to see something that might cheer you up... Probably not.