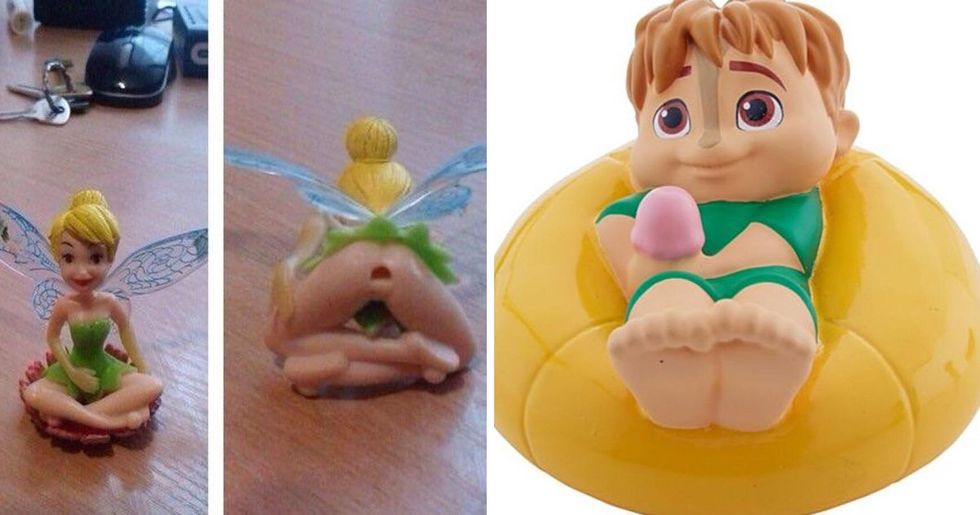 Children's toys should be cute and fun and not at all nightmare-inducing. I know. It is a novel idea. But children tend to like toys that do not seem like they could murder them in their sleep. The toys in this gallery are not the fluffy, happy toys that children love and cherish. These toys are the nightmare-inducing demon toys that you wouldn't want to encounter. They will make you scream, "What were they thinking?!" at no one in particular.

Only the bold and the brave will be able to make it all the way through this list of horribly designed toys without weeping for kids everywhere. I want to meet the people who are responsible for these inappropriate and horrifying toys and let them know what they've done. They have to know.

Toys are an important part of children's lives.

We love toys because they provide fun and comfort to kids everywhere. But not these toys.

I don't know what world the people who designed this toy live in, but that is not a "real life expression" anywhere I have been.

If you're not aware, Sandy is the squirrel from Spongebob Squarepants. You probably couldn't tell from this nightmare of an object.

Maybe Gollum is so annoying because he was traversing Middle Earth in fishnet underwear this whole time. That has to be uncomfortable.

So, this toy encourages arachnophobia and only works if children are screaming. This is possibly the worst toy ever created.

I think this toy is trying to recreate the thing where elephants hold their tails when they're walking in a line. Unfortunately, this toy went too far.

I didn't know that wizards could magically get rid of their own necks. What a talent, this Hermione Granger is!

Um, this is a lot. I guess the idea is that you hug the bear and the ball pops out of his mouth, but there are so many reasons why that's terrible.

Twenty-five balls! That's not enough balls! They didn't even pretend to lie about the number of balls in the picture.

Yeah, I don't think that's what baby kangaroos look like. I'm pretty sure they have limbs and stuff.

I'm sorry, but that does not look like a twisty bread roll. That is a pile of poo and there is nothing you can say to convince me otherwise.

Wow, these proportions are wildly off. This toy should be marketed as "Woody how he looks if you are looking at the bottom three-fourths of him through a fun-house mirror."

I don't know what this is. All I know is that it's looking surprised while you put your hand in its hole, and that's all I need to know to say, "NOPE."

Is that an errant zebra tail? Or is he just happy to see us?

Don't make inedible slime look and feel like a food product! Kids already eat toys that can't be mistaken for food. This is such a bad idea.

This is what I look like when I'm in the middle of a work meeting and suddenly I get a migraine. Smiling on the outside, suffering on the inside.

Put the hole somewhere else! This is highly inappropriate.

IKEA! This hanging pet cemetery thing is not the greatest way to display your stuffed animals. In fact, it might be the worst.

Poor beaver bear was made fun of his whole life for having two large teeth growing out of his chin. All he wants is a home where he'll be loved by someone who won't judge him for his deformity.

Spongebob looks like he's addicted to hard drugs. That sea sponge has seen some stuff.

This is what happens to Pokemon when they are bound and tied and forced to be a ride for small children. It's Pokemon cruelty, I'll tell ya!

This is the look of a panda bear stuffed animal who has been locked in a glass box for years with little to no hope of escape.

Devil in a girls' toy

Mirrors don't work like that unless either the mirror or the person sitting in front of it is possessed by the devil.

What's so bad about this? Fairies poop too, you know.

I suppose that is supposed to be an ice cream cone in his lap, that he is holding with both hands– but I'm not buying it.

Hey, Spider-Man should team up with Tinkerbell! I think they'd really fit together if you know what I mean.

Fun fact: This specific arctic fox was the result of an insane amount of inbreeding. Like, way more inbreeding than you could ever even imagine.

I don't understand what's so bad about this! You get a two-for-one: a place to put the batteries, and a terribly realistic canine butthole.

Dog with a brain

If that's not a dog with its scalp ripped off and its brains exposed, then I have no idea what that is. Share this with someone who you want to scare the pants off of!