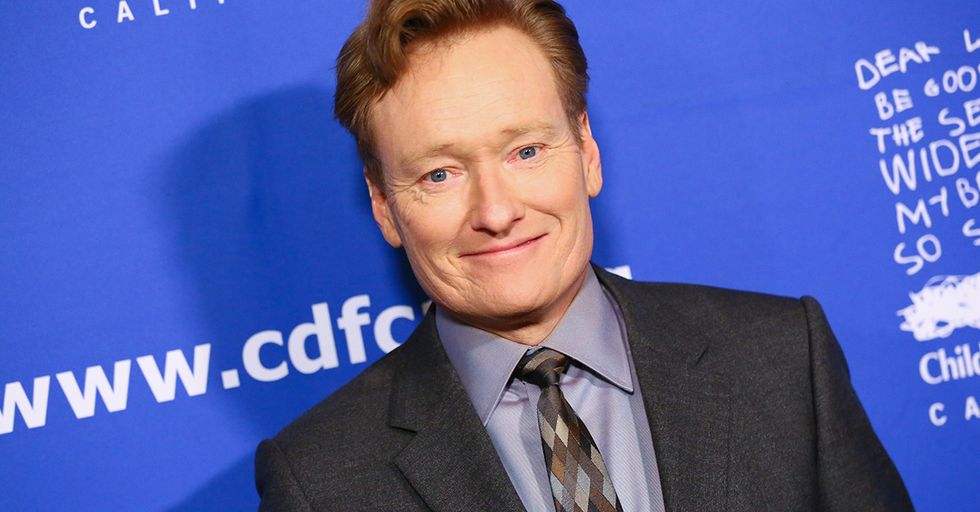 Famous parents are just like regular parents. They are constantly vacillating between being fascinated and impressed by their kids, being stressed out and tired, and trying to embarrass the heck out of their children. It is hard to be a parent, even when you are famous late-night host Conan O'Brien.

Conan is known for his sort of curmudgeonly persona, one that he brings to Twitter and to discussions of his kids. He's the parent of two teenagers, which cannot be easy. I remember what I was like when I was a teenager, and the description that comes to mind is "Nightmare. Hellish nightmare person with no redeeming qualities whatsoever."

Conan does what a lot of parents do these days. He airs his frustrations and the hilarious moments of parenting on Twitter. Here are some of the best "tips" (a.k.a. things not to do) from one famous parent to the rest of us.

Conan is one cool dad.

But if I know teenagers, his kids probably don't feel that way. Good thing he's getting back at them by tweeting all about parenting.

Distraction and misdirection is an effective tactic used by parents and musicians everywhere. It works.

Even Conan O'Brien, a professional comedian, can't get a high-five from his kid for a silly dad joke.

Of course not! Kids need to learn how to stand up straight in the face of humiliating defeat. It is a parent's duty to help them learn to do that.

I can't repeat what he actually said. The next one is too good...

I can think of nothing worse. This would make me do my homework and brush my teeth in an instant.

Every generation just wants their kids to have a better “Spiderman” reboot than they did.
— Conan O'Brien (@Conan O'Brien)1460739329.0

It's true. And at this rate, each generation will have like, three Spider-Man reboots to choose from, so we're good.

Unless you're me, and you win a goldfish in a plastic bag at a carnival, and it lives for 10 years and becomes a beloved pet. RIP Fred, the best fish ever.

I am not a parent, but I have parents, so I know that parents go out of their way to embarrass their kids on a regular basis. Conan is clearly no exception.

Having your ice cream stolen is remarkably similar to what it really feels like to pay taxes. The next one is for all those millennials out there...

I don't remember when avocado toast only cost $7. I must have been a wee little baby back then.

Aw. It's America's beer. And now it's Conan's kids' beer.

This is a pretty good idea. We all try to do what our own parents did, but better.

I guess the real test will come when he takes a shower. If he shorts out and stops moving, he was probably a robot.

There are so many things a parent will do that will send their kid to therapy. Making stupid puns is definitely on the list. Conan's jokes keep coming!

I thought it would be funny to stuff my kids’ Christmas stockings with actual stockings. I’ve never heard crying like that.
— Conan O'Brien (@Conan O'Brien)1293314060.0

You know who wants actual stockings? No one. No one wants stockings. Dad ruined Christmas.

Snake eggs are a great way to vary the Easter experience, you know? Makes the whole yard hunt a little more exciting.

I think it's silly that we try not to curse in front of little kids. Curses are some of the best words, and it's hilarious when little kids say them.

It's the greatest show in the universe! Except for maybe The Fall. And Killing Eve. And Parks and Recreation.

That would be nice, wouldn't it? Conan's dad jokes just keep getting dadder and dadder.

The Gerald Ford Presidential Museum is closed due to the shutdown. Where’s my daughter supposed to celebrate her 10th birthday now?
— Conan O'Brien (@Conan O'Brien)1381266115.0

This might actually be worse than my 16th birthday, which I spent at my grandfather's funeral. Fun times.

Kids need all sorts of devices these days to keep up with the other kids and to potentially keep them off the grid if they have to go into hiding.

What does this mean? Was Conan banned from all Victoria's Secret stores? Or did he just not want to bring his children around all that comfy underwear?

I'm with Conan on this one. The only way to properly enjoy a school play is trashed out of your mind.

Too bad this will never happen. I wonder if Conan's kids know how much he tweets about them...

HA! What a funny prank! It was hilarious when he woke up in the hospital with a concussion, too. Just top notch joking.

Honestly, in the age of Google, kids shouldn't have to ask you any questions ever. They should figure it all out by themselves.

This is the only want they will possibly learn what really happened in our nation's history.

Vacation is for unethical hunting of large, peaceful sea creatures! Obviously. What do you do when you go on trips?

With the kids off at camp, my wife and I finally have some precious time to check Facebook in separate rooms.
— Conan O'Brien (@Conan O'Brien)1530817291.0

When the kids are away, the parents will...sit silently and look at their phones. Share this with someone who needs a laugh!