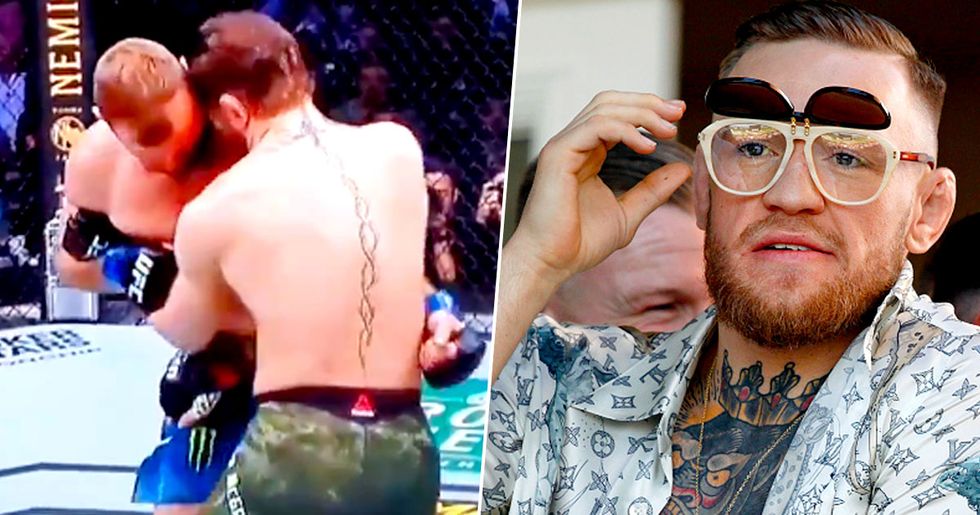 Conor McGregor's highly anticipated return to the Octagon occurred just hours ago and nobody was too sure what would go down.

But the Notorious came into the Octagon and totally decimated Cerrone in just 40 seconds.

But how exactly did he do it? Well, keep scrolling to find out!

Things seem to be getting better for McGregor.

Just hours ago, the aptly-titled Notorious, made his highly anticipated return to the Octagon. And what happened?

He destroyed Cerrone in less than a minute.

Yes. 40 seconds is all it took for McGregor to totally dismantle Cerrone in what many were expecting to be a tough fight for the Irishman.

And he did it with a totally new move.

There's a lot of things you can in MMA, but nobody has seen anything like this before. When Cerrone got ahold of McGregor's arms to prevent the onslaught of punches, McGregor hit him countless times in the face with his left shoulder, and that's what ultimately ruined Cerrone's face. Check it out.

Speaking after the fight, Cerrone said:

I was like 'oh man, this happened this fast'. I got my ass whipped early!' He got me with his elbows right away and distorted me. Then he head-kicked me. I've never seen anything like that. He caught me way off guard. He busted my nose, it started bleeding, then he stepped back and head-kicked me.

What's next for Conor McGregor

It seems McGregor is back on track to dominate the UFC. Let's hope there's no more sparring partners in Dublin pubs for him.