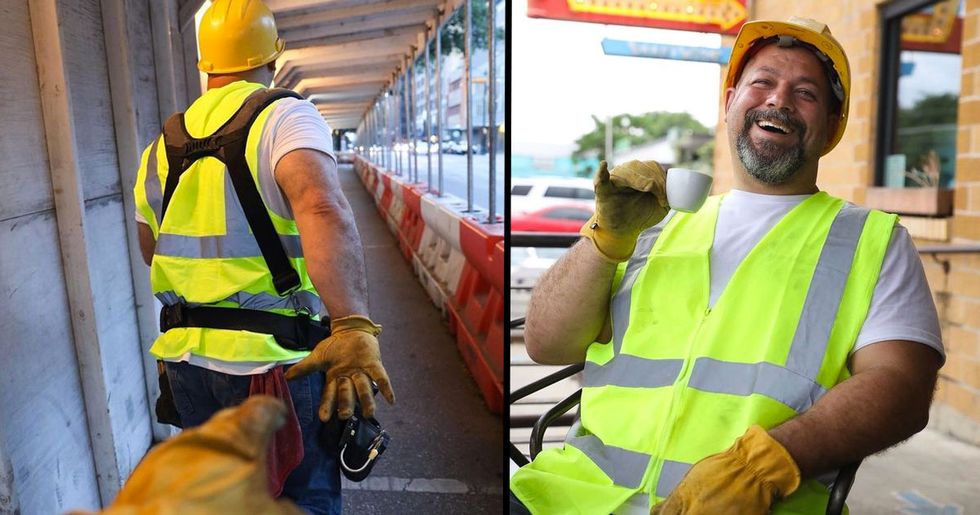 Many of us are familiar with the term "influencer" - whether it's on Instagram, YouTube, or pretty much any platform wherein you can update your followers on your life, it seems like there's an increasing number of people making a living from posting on their social media pages.

It's a topic that creates endless debates over whether being a full-time influencer is just "easy money," or if it's a genuine career choice.

After one dad from Texas found out what an influencer was, he took it upon himself to try out the "profession" for himself.

The pictures are pretty hilarious, but there's also one thing that's a little odd about his account...

Rise of the "influencer."

The term seems to be the biggest buzzword at the moment. One scroll on social media and you are bound to stumble across a so-called "social media influencer" - and it seems to be on the rise.

The textbook definition is pretty vague, but, essentially, anyone with a substantial audience online and, therefore, holds some form of credibility, is an influencer.

It's a fairly new phenomenon...

Until a few years ago, being an influencer was pretty unheard of and far from as common as it is now.

Some of the brightest stars of the industry are making the big bucks.

Many influencers are now making money from sponsorships with brands - they're paid in exchange for creating content for a company. Anything from a singular Instagram post to a dedicated YouTube video can earn some of the most famous influencers thousands of dollars per post.

But it goes beyond the odd sponsorship...

Industry favorites like YouTube's Zoella (aka Zoe Sugg), Miranda Sings, and James Charles have gone on to write books, go on tour, and even have their own lifestyle/makeup ranges after running highly successful YouTube channels (we're talking tens of millions of fans between them). It's serious stuff.

Is it a good or a bad thing?

Surely people should be able to make money through social media if they want to, after all, with our time spent on social media increasing, it sort of feels like a natural progression... right?

But, some influencers have faced criticism for being, well, a bad influence...

A select few have come under fire for promoting products such as unhealthy weight loss teas and popsicles to their audiences. But it's not just social media influencers, celebrities like the Kardashians are regular culprits too.

If all it takes is a social media post or video, is it an "easy" job?

Many people are still reluctant to admit that being a social media influencer is a job in the first place, let alone that it can be difficult.

Many people have been speaking out against the backlash, taking to social media to defend influencers.

To put the job to the test, one dad has set out to become the next biggest Instagram star.

After finding out what a social media influencer was, Omar, a construction worker dad from Texas, launched his own Instagram page. Just wait until you see his pictures...

Apparently, it was a conversation with his daughter that sparked his interest in becoming an influencer. "Pssh, I could do that."

Omar set up his Instagram page and it skyrocketed to popularity...

His snaps may not be "Pinterest-worthy" and don't exactly feature him laying on a yacht or posing by the beach, but this dad has become a huge hit online.

Omar has gained a huge fanbase.

There's a new influencer on the block.

After becoming an Instagram sensation, Omar rakes in tens of thousands of likes on his "construction site" posts. It's certainly a new take on the typical influencer posts that we are used to scrolling past.

News surfaced yesterday that the account may not be all it seems.

Did you notice something odd about the page?

There's one coffee brand that keeps on making an appearance and, no, it's not just Omar's daily dose of caffeine. It turns out that the account is part of a marketing stunt for Cuvee Coffee - a brand that regularly featured on the page and was tagged in almost every photo.

According to Buzzfeed, the account is run by Mike McKim, the owner of Austin's Cuvée Coffee. He told BuzzFeed News that the idea for the account came from a "creative brainstorming session" about a month ago. This led McKim to have the idea to make an influencer page that will also promote his coffee shop brand and products. "We started talking about construction guys, and so [Bandolier Media] reached out to Omar and said, 'Do you want to have some fun?' And he said 'What’s social media? Instagram? Huh?' He said, 'I don't know how to do it,' so we said, 'All right, we’ll help you; let’s just have some fun with it.'" he said.

It's pretty clever, you have to admit...

Although we're (very) disappointed that the whole thing was an ad campaign, there's no denying its success.

But all is not lost. Despite the news, it seems that "Omar's" fans are still loving his content.

"An icon, a legend. I appreciate you," one user wrote. Another said, "You have killed the influencer game. It’s killed. Everyone else can stop now." So, marketing ploy or not, it seems that this man's Instagram days are far from over. And speaking of hilarious moments that turned out to be publicity stunts, let's talk about Hugh Jackman and Ryan Reynolds for a second. While the actors have been developing their unique friendship since they appeared alongside each other in X-Men Origins: Wolverine, their feud has also been slowly escalating over the last few years with the emergence of public pranking opportunities on social media. Although Jackman and Reynolds recently announced a truce, their latest stunt suggests the feud is far from over...