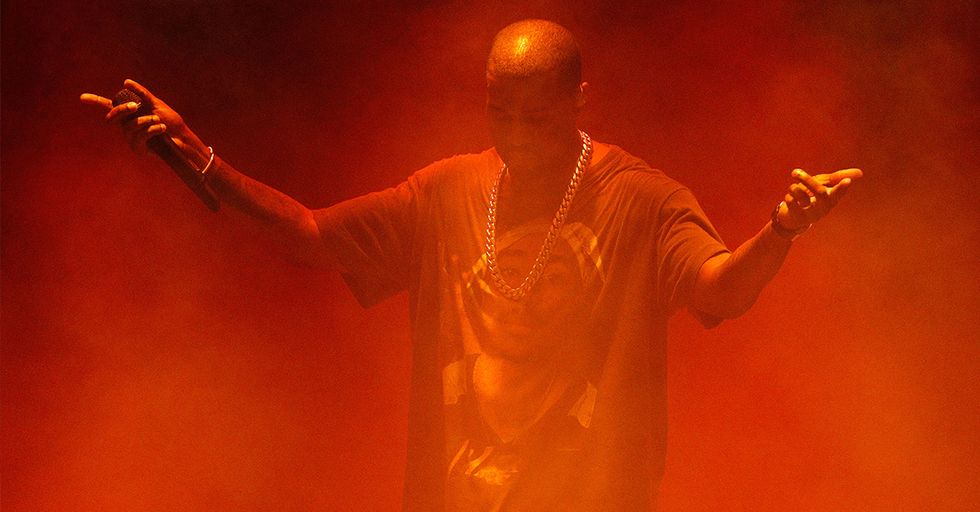 19 Controversial Things You Need to Know About Kanye West

Regardless of how you feel about Kanye West's music (or fashion line...or political stances...), you've got to admit: The guy is a fascinating human.

As it turns out, there are quite a few facts about Kanye which actually make him even more interesting than you probably realized.

Lucky for you, you're about to learn those facts today.

So sit back, relax, maybe crank that new album, and read on. Here are 19 of the most interesting facts about Kanye West.

Let's start with his infamous interaction with Taylor Swift at the VMAs.

You remember this, right? Well, after Kanye stormed the stage, he became something of a pariah. His friend and fellow rapper Mos Def urged him to fly under the radar for a bit in order to clear his head. Kanye took this advice to heart and traveled around the world before finally setting in Hawaii. Eventually, that's where he recorded My Beautiful Dark Twisted Fantasy.  So it all worked out eventually.

In fact, he became the first artist to go platinum just from digital streaming. That happened after The Life of Pablo was released in 2016.

This guy is the mascot from Kanye's first three albums. You might have already known that, but did you know the bear has a name? It's Dropout.

Kim Kardashian and Kanye got married in Florence, Italy.

That's not the interesting part (although it's a lovely place!). What's interesting is why they decided on Florence. Apparently, that's the city where they conceived their first child. Good to know. Speaking of their wedding, there was almost a very special performance at the celebration...

And it involved Seth Rogen.

Kanye was apparently so smitten with Seth Rogen's and James Franco's spoof of the "Bound" video that he invited the two of them to perform their version at his wedding. (Eventually, Kanye realized that this maybe wasn't the best idea and the performance didn't happen.)

He wasn't born in Chicago.

Although West considers Chicago to be his hometown, he was actually born in Atlanta, Georgia. He spent the first three years of his life there before moving to the Windy City.

How much do you think Kanye is worth?

Current estimates put his net worth at approximately $145 million. Not bad, eh?

What's in a name?

Kanye's first name means "the only one" in Swahili. His middle name — Omari — is also Swahili. It means "God the highest."

Have you heard the track "Through the Wire"?

It was his claim to fame, released in 2004. After being involved in a near-fatal car crash, Kanye wrote and recorded the song — while his jaw was still wired shut. And speaking of that track...

You may have noticed that it samples Chaka Khan's "Through the Fire."

Chaka Khan originally refused to clear the sample, but that didn't get Kanye down. Rather than pushing back, Kanye invited Chaka Khan's son to a barbecue and played the track for him. Just a few weeks later, Chaka Khan relented and approved the sample.

Do you know the name of Kanye's first-ever recorded rap song?

It was "Green Eggs and Ham." He recorded when he was 13 years old.

Here's something else that happened in his teens:

Kanye crossed paths with No I.D., one of hip-hop's most legendary producers. The two actually met through their moms, who worked together as teachers in Chicago. No I.D. was 19 when he first met the 14-year-old Kanye.

Kanye also lived in China for a time when he was young.

When he was 10 years old, his mother Donda participated in a teaching exchange program in Nanjing, China. Kanye lived with her there and even picked up the language (though he has since lost fluency).

He had an interest in painting.

In fact, he attended the American Academy of Art in Chicago on a painting scholarship in 1997. Eventually, he transferred to Chicago State University to study English and ultimately dropped out of school at the age of 20. But that didn't stop him from getting a degree...

In 2015, Kanye received an honorary doctorate from the School of the Art Institute of Chicago. The university awards degrees like this one to people who have produced work that is "imaginative and aesthetically rich, and sometimes also provocative and controversial, shifting the cultural landscape in significant ways."

Which makes sense! She's phenomenal! He apparently even sought out her producer in order to make songs that were "like the rap version" of her work.

He had an interesting dream job.

This is a sensory phenomenon in which two senses are connected. Some people are able to taste sounds, where others can smell different words. In Kanye's case, it means that he sees colors when he hears music.

Yet another career path?

When Kanye was growing up, his mom expected him to get a job and contribute the household. One of his jobs was as a telemarketer. Imagine getting a phone call from Kanye West! Share these facts with a fellow Kanye fan!