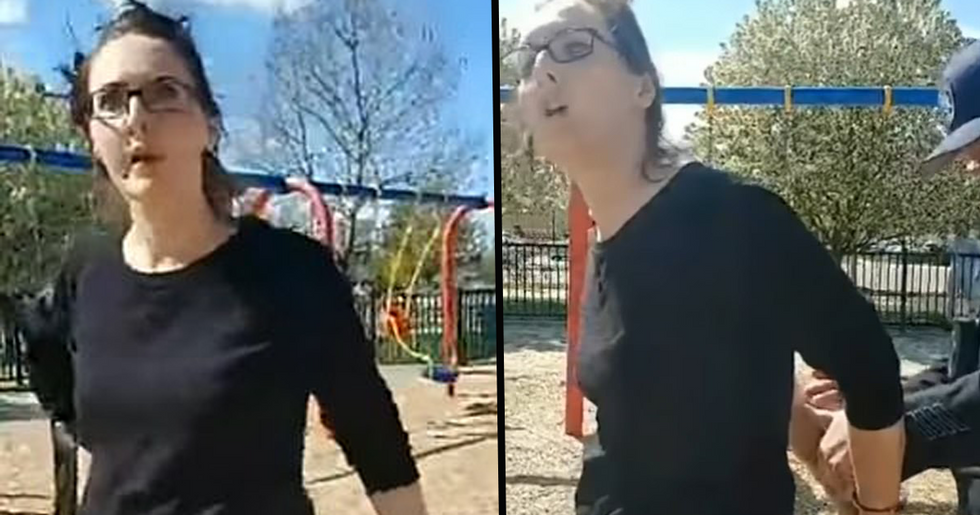 Shocking footage has emerged this week of a woman being arrested after forcing her way into a closed playground with her children in protest against the lockdown regulations.

And, since her very public arrest, an online controversy has erupted...

All across the county, controversial demonstrations are taking place.

Thousands of Americans are currently breaking the lockdown regulations to take to the streets in protest.

These people believe that the lockdown is causing "unnecessary harm" to citizens.

Despite the U.S having over 761,000 cases and more than 40,000 deaths, protestors have been fighting against the lockdown rules set in place.

They are protesting for an array of different reasons.

While some are standing up against the "conspiracies" surrounding the virus, others are exercising their basic "right to freedom."

Some even believe that the virus has been made up by the media.

Many of these protestors are claiming that the regulations set in place by the government are an "overreaction"...

But most are concerned that, if these restrictions remain in place for too long, they will cause long-term damage to local economies.

It is understandable for people to be worried.

As of last week, the unemployment number across the country surpassed twenty-two million, completely overturning decades of job growth.

But does this excuse the fact that they are potentially putting thousands of lives at risk?

By taking to the streets in large groups, these people could be inadvertently fueling the spread of the very virus that they're protesting against.

And that means we could remain in lockdown for a very long time.

The whole ideology behind these protests doesn't seem to make much sense to me.

These lockdown regulations are in place for a reason.

So most of us would imagine that, by breaking them, more harm will be caused than good.

And, in some extremely shocking cases...

Parents have been taking their own children out of lockdown.

Several parents have been spotted out and about with their children...

Despite the strict lockdown and tremendous risks of infection.

It all seems completely barbaric, doesn't it?

But now, the police have made an example of one reckless mother, and people are seriously divided.

A mom of 4 from Idaho was recently arrested for taking her children to a closed park.

Sara Brady, forty, was in the shuttered playground section of Kleiner Park with her children just before 4 pm along with other people to protest against the state's stay-at-home order.

She was asked to return home by the police several times...

But she refused to leave and continued arguing with the police officer, prompting him to give her "5 seconds" to clear the playground area. When she failed to leave at the end of the count down, she was arrested and escorted from the premises.

Speaking to the station KBOI, she said:

Sara, who is also a vocal anti-vaxxer, was booked into the local jail on a single count of misdemeanor trespassing...

But was released in time for her to attend another anti-lockdown protest.

Both protests were organized by the Idaho Freedom Foundation.

The Idaho Freedom Foundation is a conservative group dedicated to "depleting the power of special interests and free people from government dependency."

They have sparked a total uproar.

The group has been incredibly vocal about their disgust over her arrest...

And stated that they continue to "support those who peaceably assemble to protest Idaho's senseless stay-home order as well as related orders from local government officials."

But not everyone is too impressed with her actions.

A Facebook group titled, "Idaho Against Sara Brady" has been made, and has so far gained over 3000 members. Their bio reads: "United we do not stand for this BS! All these pro-covid Karen's out here, thinking vaccines are bad for you and COVID is great. Needlessly putting our communities and our officers at risk with their crazy pro-covid stances. This group is dedicated to making sure people know how dangerous COVID-19 is, supporting our officers having to deal with these people, and roasting pro-covid, anti-vaxxing Karens!"

Can this madness end now?

It really is simple - Staying at home saves lives.  For more on these shocking protests, keep scrolling to see just how 2 medical workers stood up to the crowds...
20%

$17.81 $14.25
Buy Now
See More Deals
We hope you find these deals as awesome as we do! Just an FYI: we may receive a share of sales from links on this page