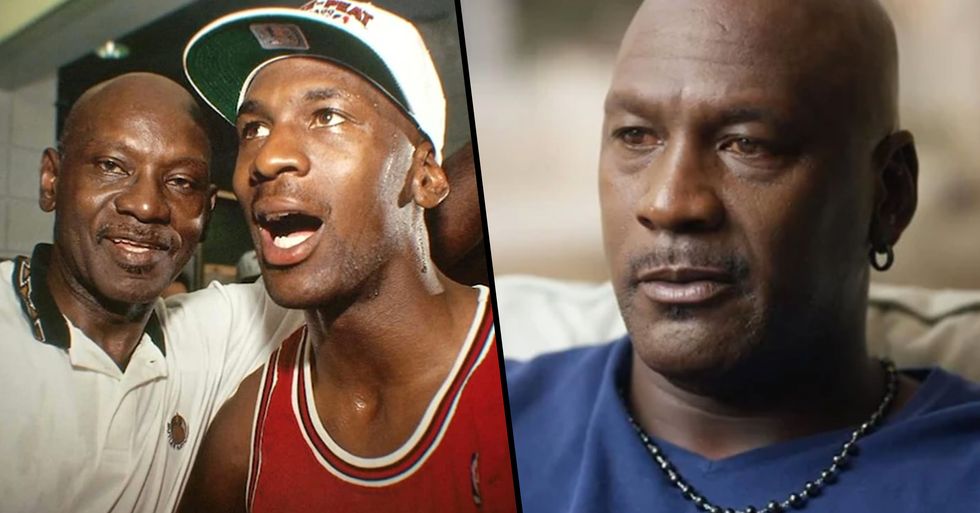 Michael Jordan has led a life that's veered hugely between triumph and tragedy. But the murder of his father is undoubtedly the biggest tragedy the star has faced.

Now in a new announcement, one of the men responsible has been granted parole.

In 1993, things were looking sweet for Michael Jordan.

The incredible athlete had the world at his feet.

As his dad and hero, James, was brutally murdered.

Thanks to his father, Jordan had developed a competitive edge at an early age...

And wanted to win every game he played - and make his father proud.

The star had grown up with a stable family life...

His mother, Delores, was a bank teller who has since gone on to write several books, while his father, James, was a maintenance worker turned manager at General Electric.

It was James who introduced his son to sport...

And even built a basketball court in their backyard... and well, it's all history from there.

James was murdered when 2 teenagers shot him in his car in an apparent robbery as he was driving from Charlotte to Wilmington.

Until his body was found in a swamp in McColl, South Carolina.

The teens involved were later tried and convicted of the crime.

And they both received life sentences for first-degree murder.

By this point, Jordan was well established in the basketball world.

The star well and truly dominated the sport from the mid-'80s to the late '90s.

Jordan began his professional basketball career when he was drafted by the Chicago Bulls in 1984.

Jordan soon proved to be a stand out on the court.

His talent was proven when he helped the team make the playoffs and scored an average of 28.2 points per game that season.

And it didn't go unnoticed...

Jordan received the NBA Rookie of the Year Award and was selected for the All-Star Game for his spectacular performance.

Jordan's second season, however, was marred with injury.

Nevertheless, he proved he was one to watch - breaking new ground during the '86-'87 season.

By the late '80s, the Chicago Bulls were quickly becoming a huge force in the basketball world.

And Jordan was credited for being one of the main reasons for the team's rising success... and it was truly up from there.

Following a short stint in minor league baseball, in March 1995 Jordan returned to basketball for the Chicago Bulls.

And he came back stronger than ever.

Jordan lead the Bulls to a then-record 72 regular-season wins...

Safe to say, he has a gleaming basketball resumé.

Over the years since beginning his professional basketball career, Jordan retired from the sport 3 times.

But this week, Michael has received some tragic news.

Which has likely stirred up some long-buried emotions surrounding his father's murder. Many on the internet are not happy.

@TMZ If you had killed Michael Jordan’s dad, why would you think walking around in public is a good idea? And how d… https://t.co/oOlWq08haR
— Truman Capoeti (@Truman Capoeti)1597786091.0