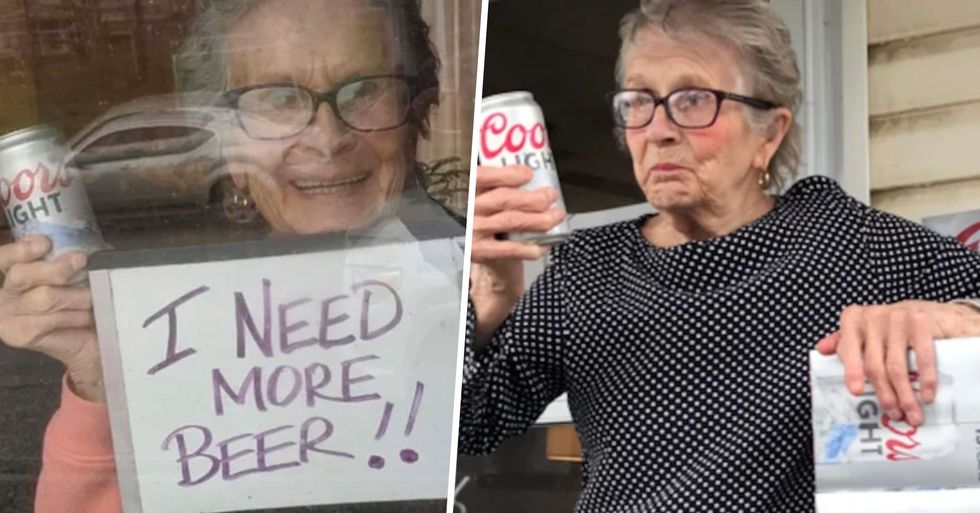 A ninety-three-year-old woman took the internet by storm when she used a sign to plead for more beer during self-isolation.

Now, it looks like she's had an unlikely special delivery. Keep scrolling for the hilarious photos...

Self-isolation is the new reality.

As the pandemic rages on, most of the world is practicing the art of social distancing and self-isolation.

But the biggest thing that people seem to be longing for...

Is a refreshing beer.

Of course, we can always pick up a few from the local store...

But for those who are having to self-isolate completely, such as the elderly or the vulnerable, getting their hands on these essentials is almost impossible.

So, one woman went the extra mile to make sure her beer-related needs were met.

Ninety-three-year-old Olive Veronesi from Pennsylvania was pictured by a relative holding up a hilarious "need more beer" sign along with a Coors Light can in hand.

And when the images reached social media...

After seeing the snaps, tons of people offered to buy Olive her beloved beer.

But that's not how the story goes...

And being their number one fan and all, decided she deserved her fix.

So, the company sent her a staggering number of the beers...

The company annouced the delivery was made on April 13.

And of course, all safety precautions were followed.

And Olive made sure to show her appreciation.

She's got a new sign! This time it reads "got more beers."

Here she is enjoying her delivery.

This is the type of content we all need right now.

Keep scrolling to check out Ina Garten's giant homemade cosmopolitan cocktail... We couldn't believe what we were watching.