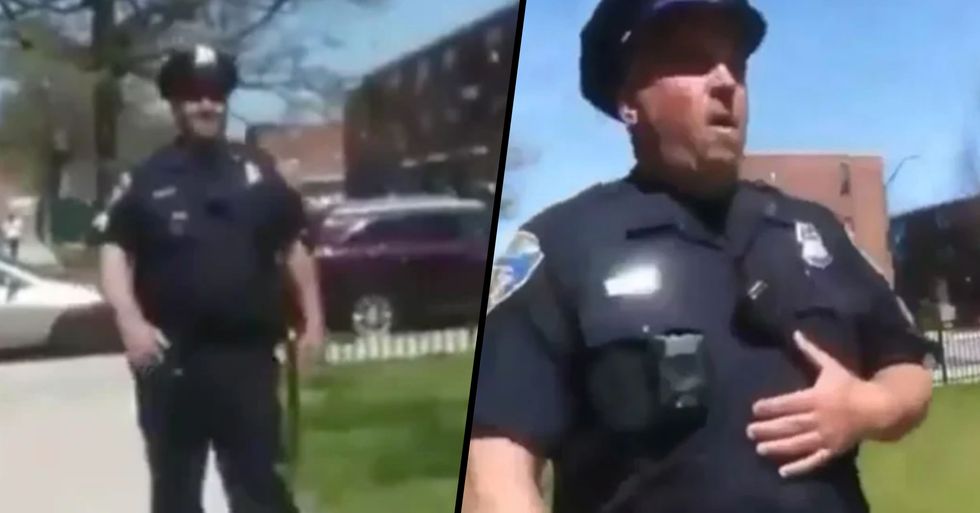 Cop Appears to Intentionally Cough at Residents in Shocking Footage

Emergency services have been stretched thin during this crisis, with many receiving abuse from the public over protocols they can't control.

This has caused a rift between key workers and civilians, which has come to light in shocking new footage.

Now, more than ever before, we need to be looking out for our emergency services.

•Cops in surgical masks •A sobering reality •Do your part •Stop the spread •Flatten the curve •We got this New York https://t.co/ofEjuTVvRe
— NYPD Transit (@NYPD Transit)1585795854.0

While we are in the midst of a devastating medical crisis, key workers across all sectors are working tirelessly to keep the public safe.

Our emergency workers have been stretching themselves to breaking point.

The ongoing medical pandemic has put a tremendous strain on our hospitals, where doctors, nurses, and caregivers are selflessly putting themselves out on the front line in the fight against the devastating illness.

While medical researchers work tirelessly to find a vaccine for the new virus...

Hospital staff have been pulling inhumanely long shifts to keep up with the influx of patients.

Police services have also been put under extra pressure during the pandemic.

While the rest of the world remains isolated within their homes, our police officers have been bravely taking to the streets to make sure the public is still safe.

Our officers are risking their own health and safety every day in order to do their jobs.

"You’re killing people!" New footage shows a police officer repeatedly shouting at a man who claims to have corona… https://t.co/vYhnYMAEjV
— The Telegraph (@The Telegraph)1585333586.0

Countless footage of these brave officers has been posted to social media, which shows them confronting potentially dangerous and contagious individuals in the street.

And, sadly, some have already lost their lives.

Heartbreakingly, thousands of emergency workers have contracted the virus themselves, which is why it's so important now more than ever to support those risking their lives by staying home.

So far, most people seem to be complying.

ADVICE: Thank you for two weeks of staying at home It’s two weeks since strict measures were announced to slow the… https://t.co/7dk0b1mAFi
— Notts Police (@Notts Police)1586169417.0

The streets seem to be less crowded, and although self-isolation might be taking its toll, it's the best way to save lives.

The guidelines are not optional.

The law still stands even for those who think they might be above it.

People from all over have been showing their support in unique ways.

In times like these, we all need someone to stand by our side, albeit virtually in some cases. We’d like to exten… https://t.co/ea6IEBtB2F
— The Kingdom Choir (@The Kingdom Choir)1586114717.0

Some have been clapping outside their houses, while others beep their horns for the healthcare workers.

Showing our appreciation and support for all @NHS and other key workers #ClapForCarers here @Gatwick_Airport this e… https://t.co/YcfkqN2syP
— Gatwick Police (@Gatwick Police)1585854764.0

But people seem to be banding together more than ever before.

Sadly, the pressure put on key workers is still great.

And not everyone agrees with the strict policing.

But it seems now that one cop has ruffled a few feathers...

A law enforcement officer from Baltimore had grown tired of the jeers of residents, causing him to do something seriously unexpected. Keep scrolling for the shocking video...

He can be seen loudly coughing at people outside the housing complex.

The cop can be seen walking through the Perkins Homes complex in East Baltimore.

The cop was clearly receiving abuse from the residents.

It can be assumed that this is what provoked him to purposefully cough on the woman recording the video.

The woman immediately fired verbal abuse at the officer, before he walked away. There was no way he was going to be let off for that...

His actions have caused criticism of the force.

Baltimore PD spokeswoman, Lindsey Eldridge, said: "We have viewed the video, in its entirety, and believe it warranted being forwarded to the Public Integrity Bureau for an internal investigation."

The police sergeant is still on active duty despite the incident.

It's not yet known if he's been tested for the virus. As disturbing as his actions were, the woman taking the video can be heard saying: "I ain't worried about that s**t. Y'all get that s**t, black people don't." This ignorant comment shows the lack of information people seem to have about the virus. Scroll down for the video...

Twelve Baltimore cops have already been tested positive for the virus.

Over one hundred officers are still in quarantine, which highlights how irresponsible his actions really were. It's not all bad news for the police though. Scroll on for the call-out to stop a huge game of hide and seek.