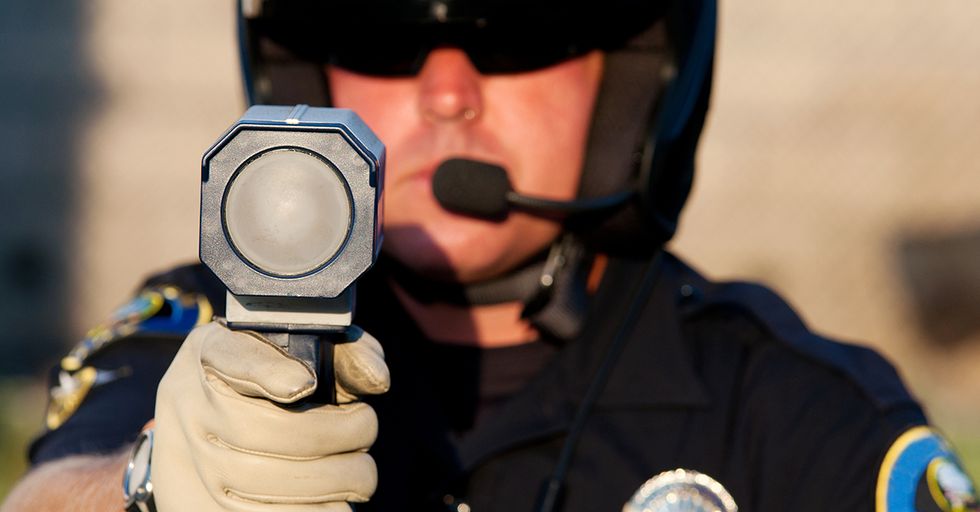 While it is very important to follow the law, some laws are...well, they're just more important than others.

No, you definitely shouldn't drink and drive. But accidentally having an "open container" because you're bringing an unfinished bottle of wine home from a dinner party?

Sometimes, cops are nice enough to look the other way.

Of course, the crime has to be minor and harmless to others. Here, 19 people who work in law enforcement tattle about the illegal things they usually let people get away with if they see them doing it.

Public urination. As long as you make a halfhearted attempt to be hidden, I’m gonna let you go. Lord knows I have peed outdoors plenty of times in college, at concerts, camping, etc. The only time I actually cited someone for it was when he was on the shoulder of a major highway, peeing INTO traffic. –gomets6091

You don't smoke weed, do you?

When I was in patrol, weed. I’m in a gang unit now, and we only really deal with violent offenders. They don’t get any breaks. That sounds cooler than it is, since, in reality, I spend six hours a day writing search warrants. –Six_Wolf_Shirt

Drunk students putting traffic cones on the heads of statues. Take it down and put it back dickhead, I have burglars to catch. –ham_shank69

A frequent one: Once the seal on your bottle of alcohol is broken it is an open container. Meaning, if you're bringing home what's left of a bottle of wine from a dinner party and have it in your car with you it can be a misdemeanor even with the cork in. Bottom line: if you have open alcohol, leave it in a bag if you're walking or in your trunk. It's worth the extra effort. –jakesjanger The next one is super common...

In my state, you're supposed to signal your turn/lane change for 100 feet (300 feet on the highway) prior to executing it. Nobody does that. –Chrysmere

The polite weed smoker doesn't get in trouble

Cannabis use. In a quiet, out of the way area? Not giving me or anyone else any shit? Yeah, throw your joints on the floor and walk away please boys. –Chips-n-cheez

Sex in cars? Just be discreet.

Sex in a car, in a secluded area. Cops always let me go with a little sly grin on their face when I was younger, I don't have it in me to write them up. –dix2long

Leslie Knope would not be happy

Violation of park rules and noise violations. If you're not being an asshole you'll be given a warning and a chance to fix yourself. Doesn't help that in my city parks technically close at midnight, I'd be writing several tickets a night. –Chrysmere

Tinted windows all the way

Window tint, none of our local departments carry the meters to tell the tint percentage. You could have 5% tint and still be fine. –IllinoisBlue The next one will have you nodding in appreciation...

You shouldn't use your cell phone while driving, but...

Not law enforcement, but one officer told me that if he sees people on their phone he doesn't pull them over if (and only if) they notice that he's there when he pulls up next to them. He follows the same policy with speeding when he's lurking in a speed trap-type thing. He says that tells him they're paying attention to their surroundings. –hey-ass-butt

There was a cop here who would refuse to arrest people for DUI in certain situations. Unless they were blatantly drunk or being a dick etc. he would have them call roadside assistance to tow their car home and have them get home safe. He kept a log too and if he caught them again they would go to jail. He just didn't feel that one bad decision was worth tieing up the courts or affecting someone's record for the rest of their life was the solution. –zismahname

Seatbelts are for winners

Seatbelts. If you don’t wanna wear it I could care less. It’s your right to die. I’ve seen people killed by seat belts before. Failure to secure your children will get you a ticket though. They can’t make decisions for themselves yet. –Pretorian1200

So many traffic infractions

The 7 million traffic infractions we see every day. Also, people screaming and arguing in the street. Just STFU you go that way and you go that way. Have a nice day!!! –Duckanoos

My uncle was chief of police and he told me usually ignored sex workers hustling in the streets. It was because he was also a pimp and ran a pretty strict regime and everyone knew the girls that worked for him. –theboyintherocks The next one is just plain funny...

The police want to be pirates

Not in law enforcement but I have a friend and cousin who both are though at different levels. They've both asked me for advice for pirating things (Though they never use the word) and I know for a fact that they've spread my advice to their colleagues. –LordLoss01

I don't think it's so much a matter of the cop "letting them get away with it" as certain police departments set policies and prioritize their officers' time for which offenses to pursue. An example of this is, I'm in the city of Seattle where marijuana is legal for private recreation. Just as you're not allowed to drink in public, you also can't smoke pot, however, the Seattle Police Department has stated it's not a priority as long as you're discreet. –mote0fdust

Not really law enforcement but if someone is illegally burning in their backyard then its fine. If there are no complaints from anyone else then burn away. –ReceivedKO

I was a young and dumb car salesman working for a dealership. They gave me a new Trans Am to drive. I was on a desolate highway in western NY state going to a Pontiac retreat and there wasn't a car around me in front or back as far as I could see. Of course, I wound that fucker up to see how fast I could go. I saw the cop parked up ahead when I was doing 135, I slowed down as best I could. He pulled me over, laughing his ass off. Said it was the best one he'd ever had. Said he clocked me at 115, then asked how fast I was going before I started breaking. I told him the truth - 135. He laughed harder. I'm shitting my pants thinking I'm going to get arrested and the car will get impounded. He asks to see under the hood, starts asking me questions about the car and what not. Then he laughs and tells me to get the f**k out here and slow down, the Deputy in the next county is an asshole and he will definitely arrest me and impound my car for those speeds. Best warning I ever got. –_Phreedom

When cops are your friends

I grew up in a college town and as townies, we got away with some of the most ludicrous shit. Personal favorite was when my buddies were out on the road with joints in their nostrils smoking them and a bong. Cop pulls up gets out and just about keels over laughing his ass off as he attempts to yell at them to go back inside the house. Granted it was someone we all new and several of us golfed with weekly but still lol. –thepoohser55 Share this with someone who could use this vital information!