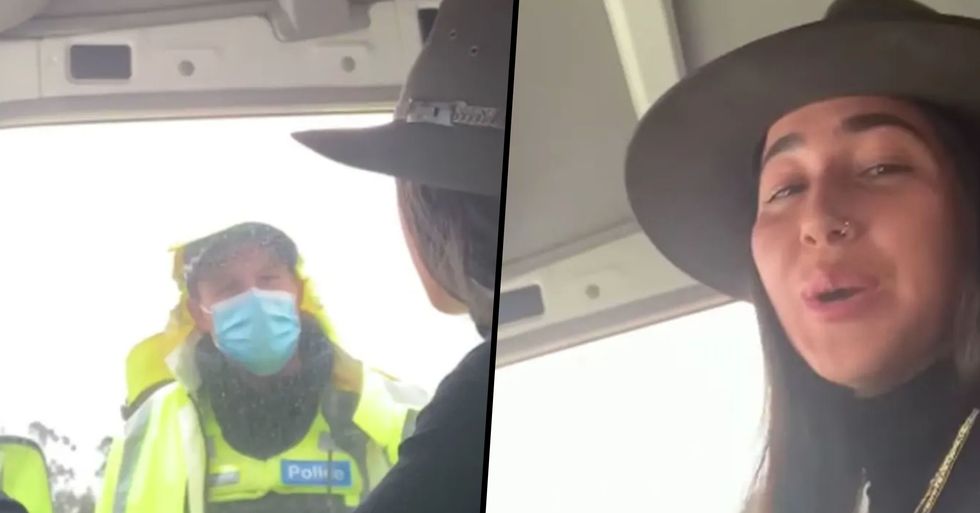 The Australian conspiracy theorist Eve Black, who believes that the coronavirus is a hoax, has been dramatically arrested by police.

Where would we be without them?

We all love a good conspiracy...

But the majority of us don't actually believe in them, right?

Whether it's a conspiracy about aliens in Area 51...

Or a theory that Michael Jackson is actually still alive... they're usually not very believable and they're more than often just a publicity stunt.

But many conspiracy theorists have been known to take things one step too far...

And one of those is the notorious, Eve Black.

Eve Black, who is from Melbourne in Australia, has been making headlines over the last few months...

And that's because she believes that the coronavirus pandemic is just one big conspiracy theory.

The coronavirus pandemic, which has so far resulted in more than 664,000 deaths worldwide, is just one big hoax according to the young Aussie woman.

Eve isn't the only one who believes that the pandemic is a hoax...

Groups of conspiracy theorists have been holding gatherings all around the world to protest against social distancing and to prove that they won't be controlled by the government.

These people are delusional, to say the least...

And Eve has been pouring even more fuel on the flames recently with her outrageous behavior.

Eve went viral last week when she filmed herself driving through a coronavirus check-point in Melbourne...

The twenty-eight-year-old uploaded the video to her now-suspended Facebook page...

And when a police officer is seen asking her questions at the checkpoint, she asks him, "Have I disturbed the peace today?"

And when the officer politely asks her why she's traveling...

She then continuously asks the officer if she's committed a crime...

To which he gives up and lets her drive away.

Eve originally captioned her video, "It's a SCAMdemic. You're being taken advantage of by a system designed to fail you. And they've done such a good job, that you don't even see it." And trust me when I say this, people weren't impressed.

People have slammed the young woman as "stupid"...

@theadamsamuel I have no words for this type of stupidity in the middle of a pandemic...we are doomed!
— BomberBoss (@BomberBoss)1595563393.0

And her complete disregard for those who are suffering from the pandemic is sickening.

Will Eve ever understand the severity of the virus?

Well, in more recent events, it seems that she may have no choice but to start taking the pandemic seriously!

Reports have come in that Eve has been arrested in Victoria.

In a statement to 9News Victoria, police said: "Upon being intercepted, she was asked to provide her name and address which she refused to do."

"Police then directed her to produce her driver's license and explain her reason for travel, which she also refused to comply with," they explained. "This led to police arresting her. During the arrest, police were forced to break the woman's car window as she refused to speak to them, wind down her window, or step out of the vehicle."

According to the news outlet, police had to break Eve's car window because she refused to wind it down or step out the vehicle to speak to them.

She will be charged with "traffic offenses, failing to produce her license, failing to provide her name and address and breaches of directives from the Chief Health Officer," the 7news.com.au reports.

Many feel that Eve had it coming...

And her attention-seeking behavior was bound to land her in trouble eventually.

Her behavior has been putting lives at risk...

And it's about time that the young woman got a reality check.

Sadly, the bodycam footage from Eve's arrest hasn't been released...

@smhussey @7NewsAustralia I really hope they release the footage of this. In times like these we all need a good laugh
— nordico (@nordico)1596015494.0

And I'm confident in saying that we're all eager to see it!

But you can watch Eve's original video here...

Let's hope she has learned her lesson this time! Keep on reading to learn about Woody Harrelson's conspiracy theory about the 5G phone masts in relation to coronavirus...