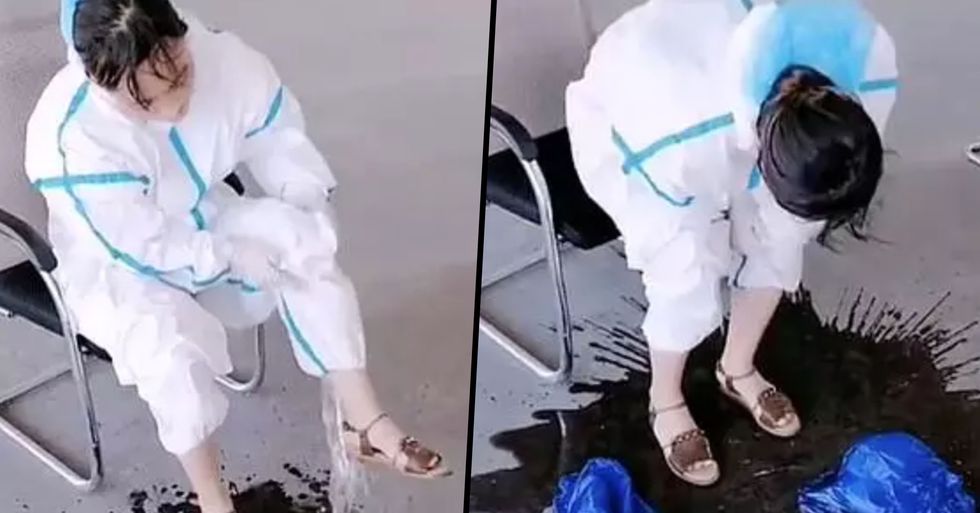 Eye-opening footage has gone viral of a coronavirus medic pouring out "buckets of sweat" from her hazmat suit halfway through her shift...

It's no secret that PPE is pretty uncomfortable for medics to wear...

But it a necessary part of treating patients during the pandemic.

But, with summer upon us and temperatures soaring...

These hazmat suits are more uncomfortable than ever.

It's hardly a surprise that these medics must be extremely hot under all those layers.

And a video has emerged proving this in the most extreme way.

The footage came from China...

And viewers have been left shocked after watching the nurse taking her PPE off.

It's a truly unbelievable watch.

If you think wearing a mask during warm weather is bad, just wait until you see this clip...

According to the World Health Organisation, more than 100 vaccines are currently being developed...

With at least 4 in their Phase III trials.

But, sadly, many experts believe that we may never have an official "cure" for the virus.

Despite the high number of drugs being tested, none have yet proven to hold the capability to save lives.

A video has gone viral this week of a nurse in China removing her PPE after working with coronavirus patients...

The video footage was reportedly filmed in Urumqi, the regional capital of Xinjiang in north-western China, while the woman was taking her break during her shift.

The average temperature in Urumqi that day was 84.2 F.

And the nurse had been having to cope with these scorching temperatures under her hazmat suit.

The video sees her removing some of her PPE...

Only for buckets, and we mean buckets, of sweat to come pouring out.

And to make matters worse...

Because she was only on her break, she would have had to return to work, putting her full PPE back on.

The clip was originally shared by the People's Daily, the official newspaper of the Chinese Communist Party.

"On 8 August, Urumqi, Xinjiang, medical staff took a break from epidemic prevention. When the medical worker lifted her trousers, sweat poured out from inside," they wrote.

"All the medical staff, thank you for your hard work! "

After watching the shocking clip...

Many have been hailing the woman as a hero.

This is hard and grueling work.

And it's truly amazing that people like her and willing to put themselves through this for other people.

For more like this, scroll on to watch the emotional moment a frontline medic reunites with her daughters after 9 weeks of saving lives...