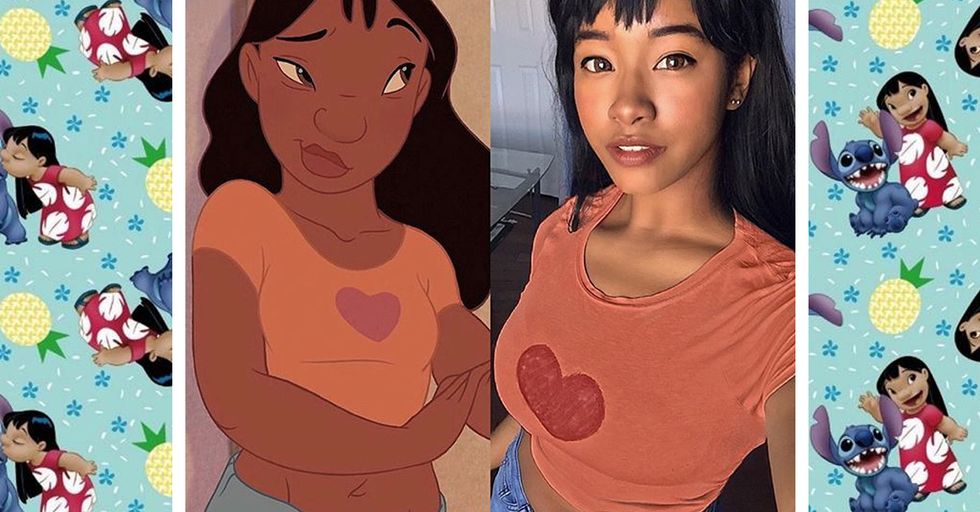 Cosplay is the art of dressing up as a character from a movie, book, TV show, etc. But it is not merely playing dress up. This is serious business. Some cosplayers are professionals who go to great lengths to achieve the most accurate looks they possibly can. Unique Sora is one of those incredible cosplay artists.

Unique Sora is a cosplay artist and college student with over 80,000 followers on Instagram. She is a 23-year-old fine arts student who has decided to put her artistic ability out into the world using her incredibly accurate and amazing looking cosplay. If there's a classic character from a cartoon or a movie or a comic book, Sora can recreate that character in real life using wigs, makeup, and elaborate costuming. Seriously, this girl is beyond talented. Honestly, she's amazing. Just wait until you see her transform into Domino from Deadpool 2. It's bonkers good.

This is Unique Sora (a.k.a. Jasmine).

She is a self-professed "queer, black/PoC cosplayer" who has amassed a following of over 80,000 on Instagram. Her cosplay is next level.

Um, Rocket Power was the best show and Reggie, tomboy extraordinaire, was my hero. Sora plays this cool gal flawlessly.

Let's talk about how Nani is the real hero of Lilo & Stitch. The girl is 19 and raising her little sister all on her own.

This Storm costume is so fierce. Look at those strange, clouded contact lenses! The commitment Sora puts into her costumes is beyond amazing.

Remember Game of Thrones? It was a show that used to be on HBO, but then it took like a two-year break between seasons and everyone forgot about it until it won a bunch of Emmys. Anyway, Missandei is one of the coolest characters on the show.

Urd is a character from Oh My Goddess!, which is a popular manga and anime series. Sora's costume, makeup, and hair are so on-point.

This may be the most insanely accurate costume in the bunch. How did she make herself look so much like her?

Oh my goodness, Recess was the best. I pretty much worshipped Spinelli even though I was nowhere near as cool as she is.

This is the Jasmine you rarely see! This is what she's wearing when she's been captured by Jafar and made to be his slave, a.k.a. the scariest part of Aladdin.

Remember Monique from Kim Possible? She was the badass bestie of Kim. I wonder who's going to play her in the upcoming Kim Possible movie!

Almost every girl I knew growing up dressed as Esmeralda from The Hunchback of Notre Dame at some point for Halloween. It's because she's awesome. Unique Sora gets it.

I loved The Proud Family! What a good show. They should bring it back. I'd totally watch a reboot.

A Goofy Movie is a total classic. Like, I don't think you understand how much this movie means to kids who grew up in the '90s. If you weren't in love with Roxanne, you wanted to be her.

Sora wrote that she loves all of Nani's outfits and she will always be one of her favorite characters. I concur with both of those notions.

Princess Kida, if you don't remember, is a character from the Disney movie, Atlantis: The Lost Empire. And I think Sora totally nails it.

Bulma is a character from Dragon Ball, which I haven't watched, but according to the show's Wiki, she's a brilliant scientist so now I want to know everything about her.

The Life and Times of Juniper Lee was a Cartoon Network show that ran from 2005 to 2007. It's full of monsters and demons and magic. Basically, Juniper is the coolest character ever.

Clementine is a character from The Walking Dead comics. Look at the lines Sora recreated on herself. Her devotion to the character design is insane.

GoGo is a superhero from the 2014 Disney movie, Big Hero 6. As if you couldn't tell from this photo, she's super cool.

Stevonnie is a character from Steven Universe, a show currently on Cartoon Network. Sora even got the hair totally right!

Remember The Road to El Dorado? It's a totally underrated animated movie. Well, this is Chel, and Sora knocks it out of the park.

Sora couldn't dress up as Esmeralda without putting on her classic, most well-known outfit. Those green contacts are hypnotizing!

Enid is a character from Cartoon Network's OK K.O.! Sora will go to amazing lengths to find and make the costumes of the characters she recreates.

Black Rose is a character from the .hack/Games. Sora definitely built her own armor for this costume. It's incredible!

This is Alex, one of a trio of badass women spies from Totally Spies! How does Sora get the colors of her costumes to be totally accurate and on point?

Sam from Danny Phantom definitely has a signature look. And Sora crushes it. There's no mistaking her for a different character.

Courtney was a character on Total Drama Island. Sora wrote that she "just happened to have" this whole perfect outfit in her closet to throw together. Amazing.

Amanda (Manda Panda) is a character from Dream Daddy, a video game. Sora especially nails the makeup in this one; her freckles are perfect.

Allura is a character on Voltron: Legendary Defender. She's a princess, and she is a majestic being. I'm talking about both of them. Share this with a cosplay fan in your life!