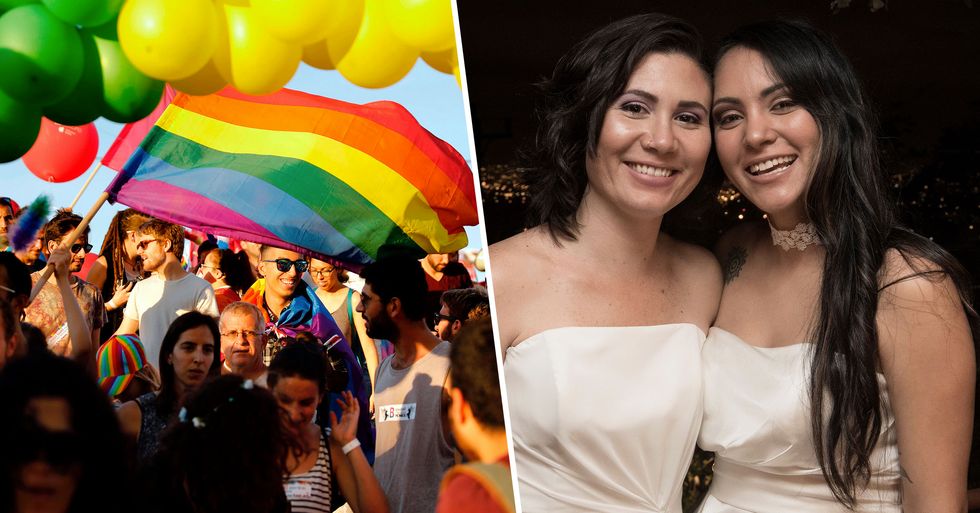 Incredible news has come in today that Costa Rica has become the first Central American country to legalize same-sex marriage.

This is a huge step. But it hasn't been an easy journey...

Despite Costa Rica’s reputation as a socially forward-looking nation...

Issues such as reproductive rights including IVF and abortion as well as same-sex marriage have not been widely accepted.

According to a 2018 survey, barely thirty percent of Costa Ricans favored same-sex marriage.

It's statistics like this that truly make you question have far we've really come.

That being said, LGBTQ+ rights in Costa Rica have evolved massively over the past decade.

But, of course, it hasn't been without its struggles.

Homosexuality first became classified as a "grave sin" and criminal offense during the Spanish rule.

Being in a same-sex relationship remained a crime in the country until the liberal presidency of Tomás Guardia.

In 1971, same-sex relationships were decriminalized.

But of course, there was still a long way to go, especially since same-sex relationships at the time still had to be kept behind closed doors, with public displays of affection being a huge no go.

In 2013, another step in the right direction was made.

Same-sex couples could register for a domestic partnership, however, the legislation only offered this in a limited form.

But one fact remained.

But that was all set to (finally) change.

On 19 March 2015, a bill to legalize same-sex marriage was introduced to the Legislative Assembly by Deputy Ligia Elena Fallas Rodríguez from the Broad Front.

2018 was a huge year for LGBT rights in Costa Rica.

Why? Because on 9 January 2018, the Inter-American Court of Human Rights ruled that countries that are signatories to the American Convention on Human Rights are required to allow same-sex couples to marry.

What exactly did this all mean?

Well, it meant that a majority decision had been made to legalize gay marriage, with the court backing the opinion of the San Jose-based Inter-American Court of Human Rights. The court stated that the ban on same-sex marriage "was unconstitutional" and gave parliament eighteen months to legislate or the provision would be automatically nullified.

Legalizing gay marriage was also a major campaign promise by President Carlos Alvarado Quesada, who took office in May that year, according to Reuters. On 1 July 2018, President Carlos Alvarado Quesada issued a public apology to members of the LGBT community. The President stated that the state had in the past "promoted and executed persecutions, raids, arbitrary arrests, and beatings" towards LGBT people.

He also spoke of the Stonewall riots...

And that, despite legalizing same-sex relationships 2 years later, discrimination and violence continued for the following decades. "On behalf of the Government of the Republic, I ask your forgiveness and I renew my commitment to fight so that this shameful chapter of our history will not be repeated."

In the eighteen months since the ruling...

There has been considerable opposition from religious groups. At the time, the Catholic Church’s Episcopal Conference of Costa Rica criticized the ruling, stating: “In the natural order of things, that basic family nucleus of society is based on monogamous and heterosexual marriage," in a statement.

In fact, earlier this month, more than twenty lawmakers tried to delay the marriage ruling.

But, the push back failed.

Meaning at midnight, the ban was officially lifted...

And Costa Rica became the sixth country in Latin America to allow gay marriage – after Ecuador legalized it last year, and the first country in Central America to lift the ban.

Today's news is a historic moment.

The three-hour Costa Rican live-TV celebration of, and countdown to, marriage equality on Channel 13 was really qui… https://t.co/N4JMXbMyGK
— InterPride (@InterPride)1590500665.0

"It allows thousands of people to marry in front of a lawyer to recognize a couple’s rights such as inheritances, pensions, medical decisions and among others. The people who will be able to access this right are not strangers. They are sons, daughters, friends, family, colleagues, and coworkers," he said. "They are people who, when they decide to get married, will do so for love, stability and because they have a vision for the future. They have the same motivations that anyone could have."

"To the LGBTQ community, whose rights will be recognized, I reiterate my ongoing compromise. Over decades you were offended, humiliated, persecuted, but you never gave up the fight. "You persisted with pride and determination. You did so with the three unstoppable forces that should guide the 21st century: Liberty, equality, and democratic institutions." He added: "Thanks to your work over decades, Costa Rica recognizes the rights you always deserved and returns a little of the liberty that so often was limited. You, your partners, your families, your children will have the same rights as any other person, couple or family in this country."

"Costa Rica is celebrating today: marriage equality has become a reality in the country – the first one in Central America!," they wrote. “We rejoice with you: congratulations to all those who worked so hard to make it happen!"

The Supreme Elections Tribunal said it will begin processing/registering the fifty-five declarations of marriage it has received from same-sex couples.

Such amazing news! For more good news, check out this adorable lockdown marriage. Nothing can stop love!