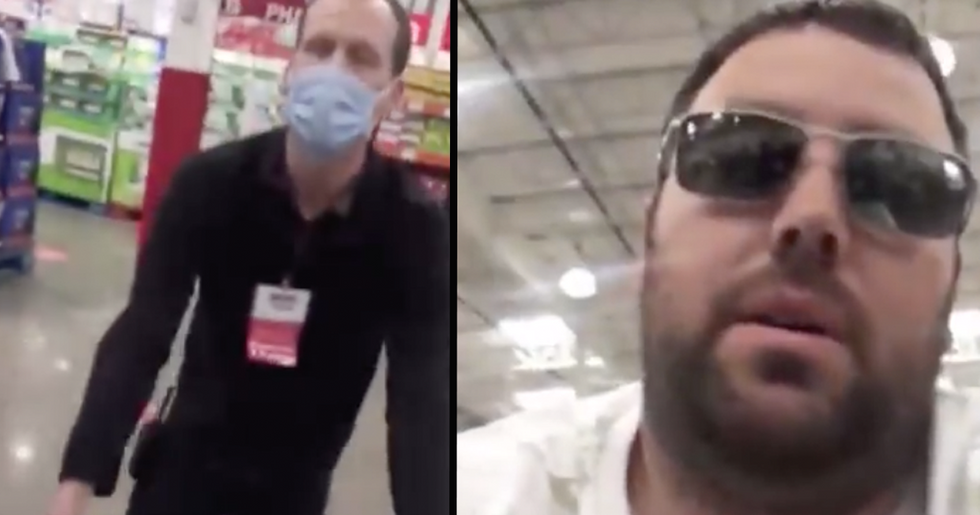 The face mask debate has long been a hot topic during the pandemic. But one Costco employee got a little bit aggressive in terms of enforcing the rule.

The virus has taken our planet hostage, and is showing no signs of letting go anytime soon.

Hospitals around the world are buckling under the pressure...

Hospitals in a region of Italy are already running short of ventilators...

One of the biggest problems we're facing is this lack of equipment.

Healthcare workers have been struggling hugely due to a lack of PPE.

Meaning many essential workers are having to put their lives at risk.

Which is a truly horrific thing.

It's a huge failure by the powers that be.

Especially since now the USA is calling for all citizens to wear masks.

Since they're in short supply, many are making their own.

People have been hugely creative in this worthwhile pursuit.

All over the world...

People have been making masks not only for themselves, but to provide for key workers who are also in need.

And the hard work looks set to continue.

I am making more PPE masks this week so if anyone knows of any care homes in need around the Croydon/Sutton/tandrid… https://t.co/Qp4dyYyyFu
— Emma (@Emma)1588414297.0

Many countries are still struggling to provide the right PPE to those who need it most, let alone the rest of the population.

But there is a problem with many mask designs.

It can feel a little bit uncomfortable or be difficult to breathe while wearing one.

A small price to pay for health, you might think.

But it seems for some they just don't seem worth the discomfort.

And one infuriating video has gone viral this week.

As one Costco shopper seems very reluctant to follow the rules.

A man is shopping at the superstore...

Without a mask - clearly in violation of the rules.

And one employee was not having it.

He calmly explains that the customer is against store policy, and takes his cart and products away.

Here's the video that's got everyone talking.

The man keeps his cool while the customer starts ranting and raving.

Why is wearing a mask such a huge problem for some?

If you can save a few lives in one simple act, why wouldn't you?

But this man is adamant.

He even made this follow up video to complain further about his "mistreatment." Fancy a more heartwarming mask-related story? Scroll on ...