Costco Is Refusing to Accept Returns for Toilet Paper | 22 Words 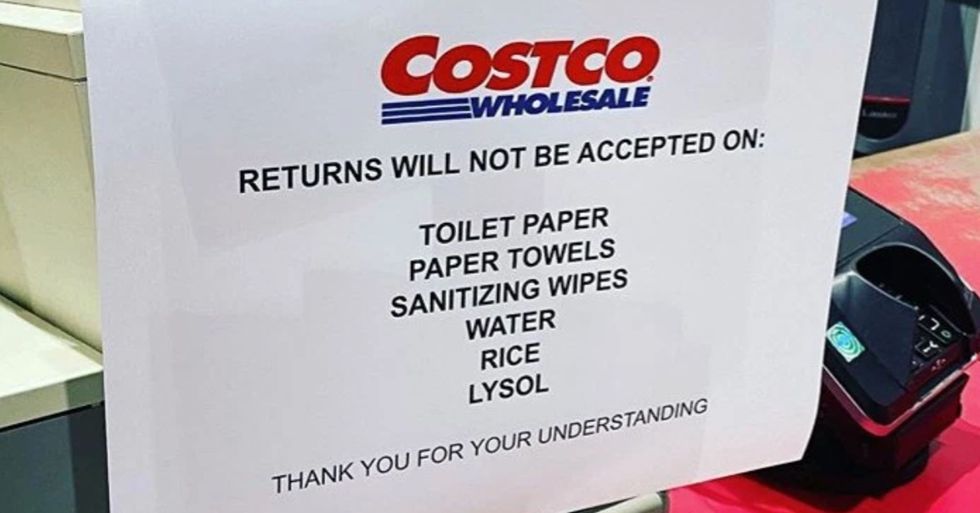 Costco Is Refusing to Accept Returns for Toilet Paper

Sadly, it's the elderly and vulnerable who are suffering as a result of this selfish behavior and things don't seem to be getting any better.

And amidst the panic buying, Costco has announced that they are refusing to accept returns for toilet paper.

And it doesn't seem to be slowing down. Originating from the Chinese city of Wuhan, a deadly virus known as the coronavirus has been rapidly spreading across the globe.

With a range of symptoms, including fever, coughing, shortness of breath, breathing difficulties and severe cases of pneumonia, severe acute respiratory syndrome, and kidney failure, it has been confirmed by Worldometer that 14,757 people have now died globally. A further 341,816 people have been found to carry the virus and be infected.

The virus continues to rapidly spread, and traces of the disease have already been discovered and confirmed in many other countries including here in America, the U.K, Italy, Thailand, South Korea, Taiwan, Saudi Arabia, Japan, and Australia.

Everyone has been asking the same thing...

People all around the world are in a mass panic right now...

And Australia is just one of the countries who has been hard-hit by this panic. According to the Australian health department, there are currently 1,709 confirmed cases in the country with 6 people now dead from the virus.

Sadly, this is not just a one-off case of selfishness.

Are you going to wait until the vulnerable start dropping in the streets from hunger? End panic-buying hoarding and… https://t.co/u01c46MfpV
— George Galloway (@George Galloway)1584703489.0

It's been happening all over the world and hundreds of thousands have been left unable to buy their weekly groceries.

But one thing that is obvious...

Is that those foolish individuals who have been bulk-buying to the extreme will soon realize that they have bought way too much.

People have actually been trying to return some of their bulk-bought items.

But it seems that some supermarkets are having none of it...

And Costco is one of these.

The membership-only supermarket is known for its incredible deals and cheap buys...

And the people behind the megastore have been putting their feet down on refunds.

Costco put up this sign in a store in Pentagon City outside of Washington D.C...

The store is refusing refunds on items such as toilet paper, paper towels, hand sanitizer, water, rice, and Lysol.

People have been expressing their opinions...

And this Twitter user feels that Costco should stick to online sales only after 1 employee has already died from contracting the virus.

Another user feels that the store should be open 24/7...

And they feel it would ease the frenzy of panicked shoppers.

Hopefully, this will encourage people to put a stop to this ridiculous stockpiling.

It is unnecessary, greedy, and selfish... and it is about time that we start thinking about others instead of ourselves. Keep scrolling to learn about how Harvey Weinstein has been tested positive for the coronavirus...