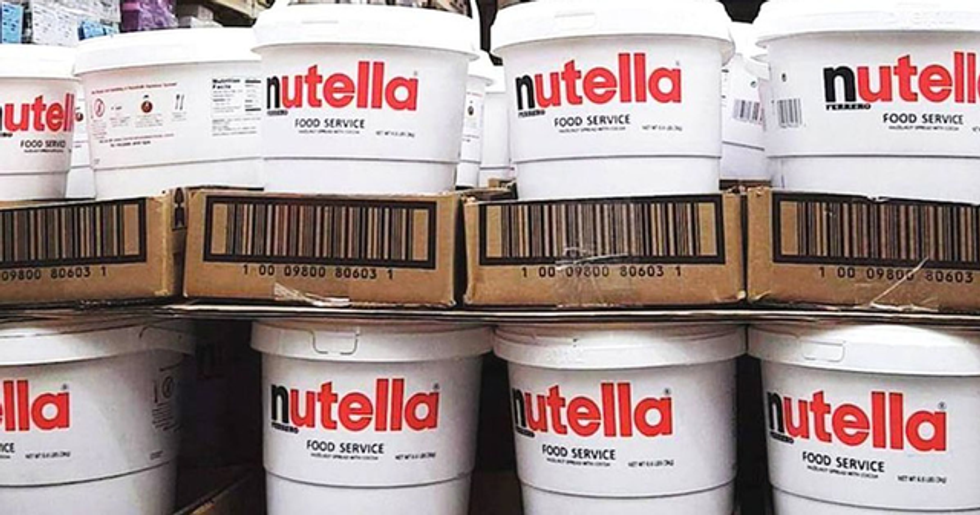 Costco Is Selling A 7-Pound Tub Of Nutella For $22

For those who love a bargain, it's safe to say Costco is a pretty magical place. Whether you're shopping for vats of salsa, crates of sodas or industrial sized jars of mayonnaise, stocking your larder from its plentiful shelves can really save you some serious cash. Plus, there's something oddly satisfying in having your favorite products in giant, wholesale size.

The newest addition to the giant-sized and low-priced Costco family? A jar of Nutella that weighs in at almost 7 lbs. That's literally the weight of a newborn baby, except this is a jar of delicious, chocolatey, hazelnutty goo. For Nutella lovers, this is a dream come true, and could prevent any "running out of Nutella" related emergencies. We can't help but want to dive head-first into this delicious tub.

Costco is a place we all know and love.

Shopping at Costco is a pretty exciting experience.

It's designed to sell to other wholesale retailers, though average Joes like you and me can get a membership and enjoy stocking our homes with industrial sized products. It's a great way to make savings and stock up on essentials that'll last for ages.

A Costco trip can feel a little bit "supermarket sweep."

When the cost-per-use is so low, it can seem totally rational to buy a year's supply of toilet paper or a jar of mustard to size of your head.

Getting a Costco membership is a pretty big deal.

Finding someone who wants to share one with you is basically a bigger commitment than marriage. Potentially more useful, too!

Of course, there's another big benefit to Costco.

The free samples are pretty incredible - you can basically enjoy a meal while you're browsing, just in twenty small courses. You may wish to implement a disguise in order to make the most of their generous sampling system.

Costco culture is a treasure trove of Twitter jokes.

Some users point out the "savings" you make shopping at Costco come at a much larger cost. Although, if you break things down into cost-per-use, plus take into account the fact you don't have to take as many annoying trips to the grocery store, we're still very much pro-Costco.

Those giant-sized products can be a little deceiving.

But there's something so satisfying about having the very biggest version of your favorite items. Comforting, too, since the chances of running out become minuscule!

Yep, it's safe to say Costco has a very special place in our hearts.

If you want to save money, prepare for the apocalypse and marvel at feats of modern engineering, there's really no better place to go.

Look at all these big, huge products!!!

It's consumerism at its finest - and you can truly find anything within its four magical walls.

Nutella has been around since the 1960s. It even has its own special day, World Nutella Day is February 5th.

It has since garnered a cult following.

And if you're wondering why - well, just look at it! This creamy, chocolatey, hazelnutty spread is pretty much what dreams are made of.

The tasty spread is designed to be spread on toast.

Although many Nutella connoisseurs favor a "straight from the jar" eating style.

Which leads us to the latest Nutella-related news.

The store will soon be stocking a 6.6 pound tub of the good stuff, which will cost just $22. For those who count themselves as Nutella-holics, this is truly excellent news.

Our faces when we heard the news.

Based on the recommended serving size for Nutella, this ginormous jar contains 81 servings - or, in our minds, about a week's supply.

This has always been a private dream.

Now, thank to Costco, we can (sort of) make it a reality. The next biggest size on the market is 33.5 ounces. This new venture is basically three times the size of that, at 105.6 ounces. It basically comes in a bucket!

People are pretty excited about the news.

After all, it combines two things that people on the internet love: Nutella and Costco. What's not to like?

Although some are a little less thrilled with the news.

In fairness, this story does basically seem to be a meme come to life. But when that means 70 lbs of liquid chocolate, we're not complaining.

We're just thinking of all the different ways we can incorporate more Nutella into our diets.

This isn't the only "Costco creates giant product" news story.

Just before Christmas, the company came out with an eight foot teddy bear which took the internet by storm.

At the time of writing, he has over 1,000 followers, and is well worth checking out if you're into Costco related content. Find him here.

Can we say cute?

The bear is still available through the Costco site - though he's not as much of a bargain as the Nutella bucket, coming in at $289.99.

Oddly enough, this also isn't to only bit of Nutella / Costco crossover content.

In 2015, a young man reportedly punched a senior citizen who was getting in the way of his Nutella samples.

The senior citizen was left in hospital with a one-inch cut near his eye.

The man in question was charged with assault in what seems to be one of the weirdest news stories of the year.

Internet Nutella fans had something to say on the matter.

A 24-year-old California man punched an old man over free Nutella samples at COSTCO? I dont condone his actions but, have you tried Nutella?
— Cyrus McQueen (@Cyrus McQueen)1444405916.0

We told you, this chocolate treat has something of a cult following!

While the incident isn't funny, this tweet sure is.

Although we would never condone violence, even if Nutella is at stake.

Us, hugging our new best friend.

The best part? You don't have to punch anyone in the face to get your hands on the 7 pound Nutella jar.

You can purchase the Nutella right now.

It's available through the Costco site, and costs $21.99 with $3 flat rate shipping. For under $25, you won't need to buy Nutella for weeks!

We're glad we're not the only one who had this idea.

Although, let's face it, Nutella is primarily good for one thing: eating. And it's extremely good for that.

We can't wait to make our purchase.

Although rather than face the mayhem of a Costco store, the online option is looking preferential. We might just add an eight foot bear to our cart while we're there...

Costco, what will you think of next?

If your recent launches are anything to go by, we're very excited to see what's in store for the future!