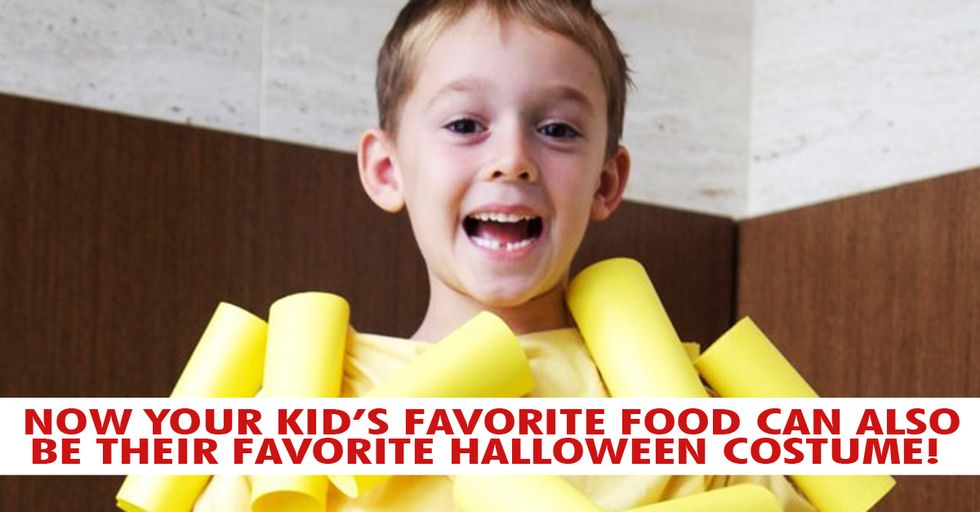 Even though adults like Halloween, let’s be real — it’s really for the kids. And even if they run around in Power Ranger or princess clothes all throughout the year, Halloween is the time when they want a new costume and a new look to go with all that new candy.

Have no fear! With a little elbow grease and some creativity — yes, you can make these yourself — you don’t have to spend tons of money to create a good look.

Need proof? Use these clever suggestions for inspiration.

This dad cut the wood and mounted it to a wagon, welded on the metal hardware, and made the back half of the mouse to work as a cushion for the child's back. Adorable!

Who ya gonna call?

This adorable little Ghostbuster. Just be careful and watch out for slime...

You're only as old as you feel.

This mom used hand made clothes, stuffing for saggy boobs, and a costume beard that she turned into a wig with a bun. Add in a walker cut down to size and you're all set!

What's on your iPod?

With a little paint, minimal artistic talent and a few supplies you will find around your home, you can easily create an iPod costume for your budding music man.

A box, some paint, and a few Solo cups and you have yourself a LEGO. Everything is awesome!

Two peas in a pod.

Everyone will be green with envy when you show up with these two little cuties in a stroller that serves as the pod.

All it takes is a headset, a red polo shirt and of course, the khakis, and you have yourself your own little agent.

via: A Party Style

Everyone knows that iconic image. So this mom dressed her adorable daughter in a tan leotard and tights, then reconstructed the backside to reflect the logo, puppy dog, and all!

Now that's using your noodle! All it takes is some yarn and creativity.

via: Crap I've Made

This mom found a Slurpee font and downloaded it, the “cup" is cloth automotive headliner fabric, and used lots and lots of patience and paint. Oh! And the straw is a pool noodle. So creative!

Who doesn't love the blue box? All it takes is a small round plastic laundry basket about 2 feet tall, 3 sheets of poster board and acrylic paint in blue and yellow.

Make yourself a walk. Blow up some balloons. Before you know it, you're a star!

This one might take a bit more work, but you have to think outside the box. Actually, stuff yourself inside the box, get crafty with your paint, and you're good-to-go.

Care to go for a picnic?

Basket? Check. Food? Check. Adorable baby stuffed in the basket? You know it!

Dwight from The Office.

It's everyone's favorite person at the office, as long as you don't have to work with him. Then again, it would never be boring there.

This costume is super simple, requiring only a bike with a basket, a red hoodie, and an E.T. stuffie. And maybe some Reese's Pieces.

Talk about airing your dirty laundry!

This mom used a large box, spray painted it, cut holes in the top and sides for head and arms, and used a deli tray with bubble wrap and blue cellophane for the front part. Then she used portion cups and the spray paint lid for the nobs. The laundry basket is held up with sock suspenders and filled with old clothes, and she also glued socks and underwear to cheap head bands.

This costume starts with a basic black leotard and matching opaque tights. Dress up the leotard with yellow tape and adhesive letters, and for the wings, you’ll need to hit the recycling bin and your closet.

And an even smaller octopus.

You can pretty much do the same exact thing here — stuff some tights and attach them to the onesies. Don't forget the cute hat!

This one takes some sewing, but once you pop, you can't stop! Instructions here.

This one only takes ten minutes and requires a clear umbrella, ribbons, leggings, and a shirt. Full instructions here.

The key to a good Frida costume is the flowers in the hair and the unibrow and mustache. Get the full DIY here.

Care for a snack?

This requires a number of cardboard boxes, lots of spray paint and duct tape, nine slinkies, a piece of plexi-glass, and some candy. Full DIY here.

The best part? No fishy aftertaste.

All this takes is a box, some paint, and a jacket and hat. Full instructions here.

Basically just dress your little dude in dapper duds and you have the most popular ad exec on the planet.

Not only is it cute, but it's also a great source of Vitamin C! What more could you ask for?

It doesn't take much to turn your toddler into a delightful yard decoration, more or less. Who knows? Maybe he'll end up working for Travelocity!

All the Doctor Who fans out there will appreciate what can be done with a box, some paint, and some patience. Tardis for the win!

via: The Wishful Artist

Any Star Wars fans out there? This one takes a little bit of work, but it's worth it. Full DIY here.

He is wise beyond his years.

And smart parents know that it doesn't take much to pull of this look. Ommm...

They're off to see the Wizard! Hope he has good treats...

Who doesn't love bacon and eggs? Especially when they're so stinking cute.

The key to this one — other than the scissorhands — are the realistic scars. Get the full DIY here.

Consider the candy the accessory to this creative piñata creation Then again, this costume could be a little bit dangerous... Watch out for flying sticks!

Lace's out! Everyone knows laces go out! Get the full Finkle DIY here.

What's better than that delicious cup of joe? An adorable barista and a life-sized latte.