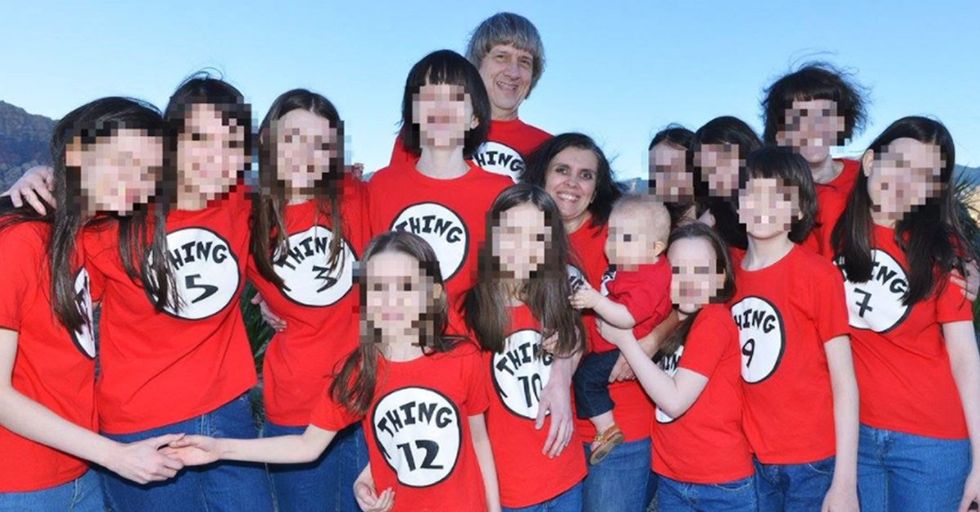 How much do you know about your neighbors?

It's a particularly resonant question for one California community now grappling with the news that a pair of their neighbors have been abusing their 13 children – aged two to 29 – for years.

At 6 a.m. Sunday, the sheriff's office in Perris, a community about two hours southeast of Los Angeles, received an unsettling call.  A 17-year-old girl claimed that she had just escaped the house where her parents had held she and her 12 siblings captive – many of them in shackles.

When Riverside County sheriff’s deputies found the girl, they were shocked by her emaciated frame. She looked 10 instead of her stated 17, according to the sheriff’s account released Monday.
The scene when they entered the house on Muir Woods Road was just as horrific as the girl had described. There were "several children shackled to their beds with chains and padlocks in dark and foul-smelling surroundings," the statement read.
They'd been kept shackled in the dark, and all of them were so frail, the deputies mistook them for minors. In reality, while the youngest child was 2, seven of them were adults aged 18 to 29.

Even stranger, their mother, Louise Anna Turpin, 49, seemed surprised by the police presence. "It seemed that the mother was perplexed as to why we were at the residence," Riverside County Sheriff’s Capt. Greg Fellows said.

Both she and the father, David Allen Turpin, 57, "were unable to immediately provide a logical reason why their children were restrained in that manner," deputies wrote.

Couple arrested after police discovered that their 13 children had been held captive in their California home in fi… https://t.co/ama30hbJET
— CNN (@CNN)1516096565.0

Deputies gave food and drinks to the children, who were starving, before admitting them to hospitals. This was the first time police had been called to the house. The parents were arrested for torture and child endangerment and each is being held for $9 million bail. But how could this happen?

The Turpins, who moved from Texas to California because of bankruptcy, seemed like an average couple. David had worked as an engineer at Northrop Grumman, an aeronautics and defense technology company and earned more than $140,000 in 2011, although his expenses exceeded his take-home pay by $1000 a month, according to bankruptcy documents. Louise Turpin was a homemaker with no income.
The children were, presumably, homeschooled, and the address is listed as as the location of the Sandcastle Day School, a private non-religious and co-ed K-12 campus, according to the Department of Education directory. Six students were enrolled — one each in the fifth, sixth, eighth, ninth, 10th and 12th grades.

Neighbors say the family always seemed strange. One neighbor, Kimberly Milligan, 50, says the children were very pale, and she and the other neighbors wondered why they never came out to play. "I thought the kids were home-schooled," she said. "You know something is off, but you don’t want to think bad of people."

David Turpin’s parents, James and Betty Turpin, told ABC News they were "surprised and shocked" by the allegations, adding they had not seen their son and daughter-in-law in four or five years.

so when the grandmother of the 13 children held captive says the parents are being misrepresented and are a respectable family, it's clear that the evil was passed down.

Sheriff Fellows had sharper words about the case. "If you can imagine, being 17 years old and appearing to be a 10-year-old, being chained to a bed and being malnourished and injuries associated with that — I would call that torture," he said. Indeed.